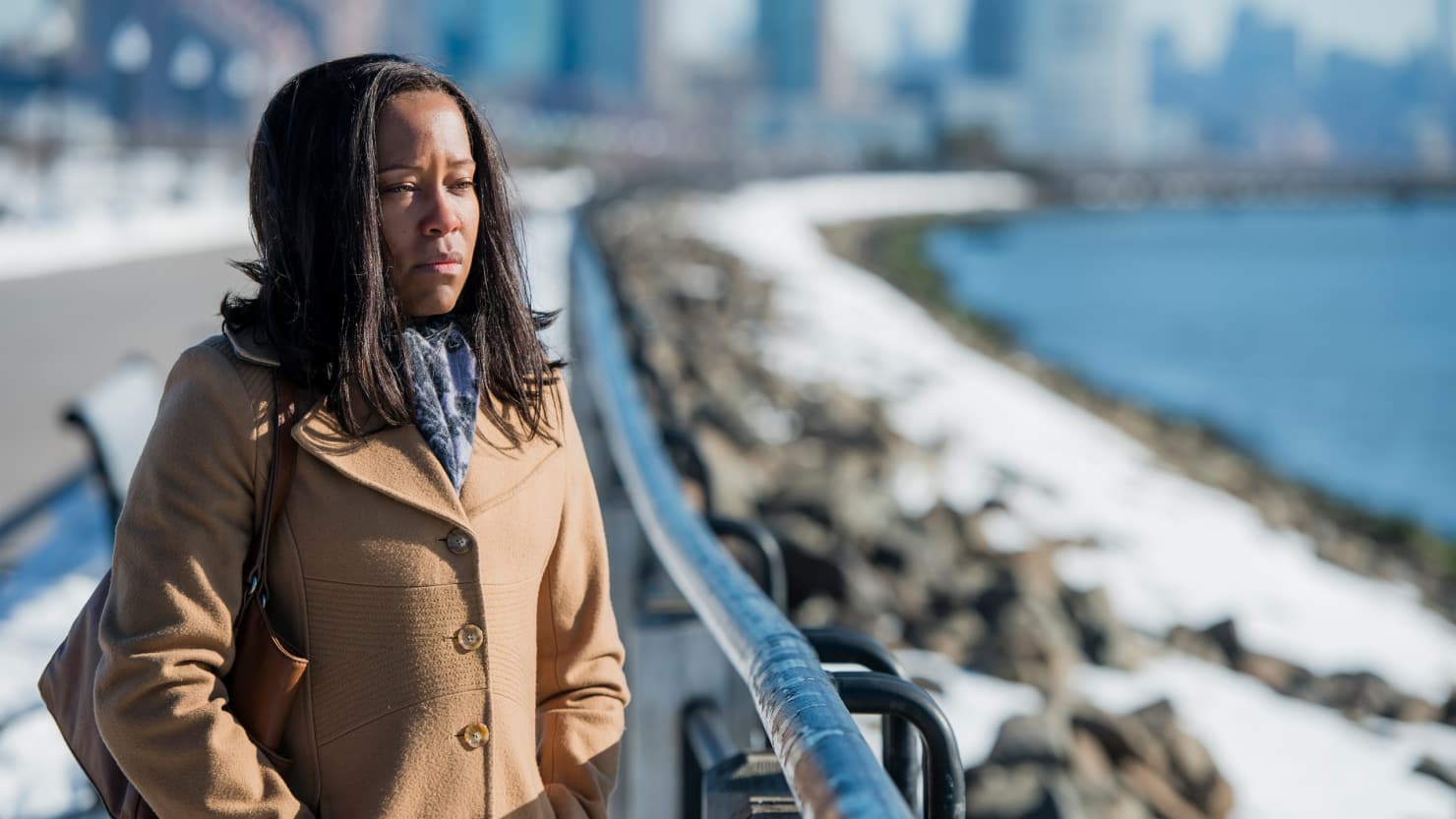 At the end of the seventh episode, KJ and Fish, played by Michael Mosley, nail Peter Jablonski and the rest of the police cover-up crew in Brenton Butler’s murder. But the question remains –will Jablonski be convicted?

Leading up to Jablonski’s arrest, Tricey, Brenton’s mom, finds out (before KJ and Fish) that Jablonski is the murderer. She tries to get her husband ‘Saiah to ride with her to Jablonski’s house to confront him, but ‘Saiah sees her as a potential danger to herself and others. A fanatic Christian, ‘Saiah asks his pastor to come to his house for a “spiritual intervention” that sends Tricey into an impassioned frenzy. She declares that God wasn’t with her son as he laid out cold, alone, and clinging to his life in a New Jersey park. She pretty much tells her husband and his God to kick rocks. She rolls out, convinced that her calling is to take care of Jablonski herself.

What I love and hate about Tricey and ‘Saiah’s relationship is that it’s annoyingly familiar. As a Black American woman, there is always that one passive Christian family member who is so under the control of a church that s/he refuses to be in their feelings about real things, like losing a son. ‘Saiah tries to convince his wife that she must move on with her life after Brenton’s murder and that his God should be the one that she leans on. But ‘Saiah’s input on how she should grieve is not only ridiculous, it has no weight because he admittedly, did not take the time to get to know his son. He is reminded of this by Tricey, his brother Seth and Brenton’s old friend.

As a woman who grew up in the Black Christian church, love is the most important commandment, and like ‘Saiah, many Christians don’t put that commandment into practice. ‘Saiah was so focused on taking care of the church by showing up on time for service and playing the piano for choir rehearsals that he forgot to take care of his home by loving the people in it. What a shame that his son was killed, and he knew nothing about him. So, I understand why Tricey would reject her husband’s advice and the God he prays to. I would have done the same thing.

When Tricey leaves her husband in the dust, she puts all her effort into getting more information about Jablonski and lawyering up, all while living out of her car. Listen, this is a mother’s love we’re talking about. They are willing to do anything for their children, especially dead ones who were killed by dirty cops.

When KJ and Fish finally have enough evidence to declare that cops were behind Brenton’s murder, she asks Tricey to point out the cop who killed Brenton in a photo of all the cops in that particular precinct. She scans the entire photo and asks, “Is this everyone?” KJ says yes. But Jablonski wasn’t in the photo. Remember, Jablonski is a rookie. But, again, JK and Fish, don’t realize that. After this encounter, I imagine that Tricey thought JK and Fish may really be on the cop’s side. And this is when Tricey turns completely cold to KJ’s help. She is convinced that she must take care of Jablonski “Kill Bill” style.

Tricey goes to her brother-in-law Seth, who has now re-joined the Five Gangs selling dope on the corners. She asks him for a gun because she believes that’s the only way Brenton will get justice. In a beautiful scene, Seth puts her to the test. He forces her to point a gun at a stray dog and commands her to kill it. As she raises the gun, she is shaking like a leaf. Seth snatches it out of her hand, and as he pulls the trigger, Tricey smacks his arm away. Tricey is no killer. But she’s not a fanatic Christian either.

The latter is made clear during a “Justice for Brenton” protest outside the precinct. A mother who suffered a loss of one of her children being killed by the cops tells Tricey that she must forgive the cop who killed her son. Tricey said, “Nah.” And I agree with her. The problem with the Christian “turn the other cheek” and “forgive whenever possible” is that those can’t be applied when a group of people regarded your son as trash. “Nah” to forgiving, especially at this stage, is reprehensible. Maybe Tricey can re-visit that if Jablonski is remorseful. Maybe. But when you break down the word “forgive,” it means to “pardon.” How can a mother sincerely pardon someone for covering up her son’s murder. I mean, really? It’s ludicrous. The only one who should be in the forgiving business in that situation is God. But on earth, Jablonski and the rest of ‘em owe her big.

But how will they pay? The lawyer that Tricey has now lost said that a big payout is one of the ways to do it. At the moment, a conviction is what Tricey wants. But what kind of conviction, and what kind of sentence? All of that matters because a loose conviction and a barely-there sentence could actually send Tricey to the dark side.

When Jablonski is put under arrest, he asks KJ if he can say goodbye to his newborn son. KJ responds, “No,” making me smile in amazement because in any other show, that man would have been able to do that because he is white. But this man is a murderer. If Brenton wasn’t afforded his shoes while he laid cold and comatose in the snow, then Jablonski doesn’t get to say goodbye to his newborn son. Not sorry.

“Seven Seconds” is heating up, and I am just so excited to see how this will all end. I am crossing my fingers that no one involved in the murder will be spared. But this is a story set in America, so having hope might be borderline delusion. We will see.