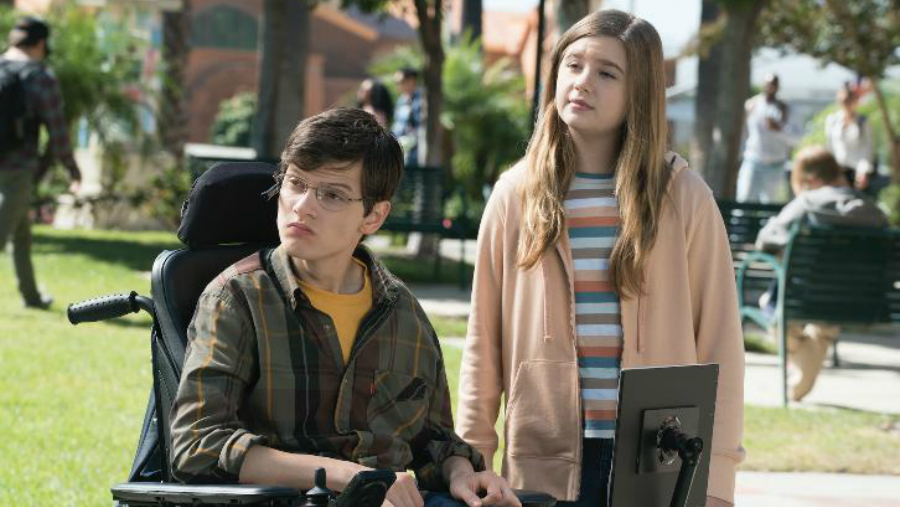 Part of the reason why Speechless works so well is the humanization of J.J.: he’s not condescended to (or, those who do condescend him end up looking pretty dumb) and he’s never boxed in by his role, experiencing the same limitations that the world places on a person with disabilities. So many shows have done this – cast people with disabilities as token characters meant to serve a usually insulting purpose. This show focuses on him as a central character with typical interests, authentic relationships, and agency, but it’s not afraid to address his insecurities that many people with disabilities also have. That’s what makes it truly bold. One particularly bold move the writers made this week, though, proves to be lamer than anything.

After being confronted by Kenneth about not turning in a school paper about his passions, J.J. suddenly expresses an interest in engineering and asks his parents to drive him to Danton University. Ray and Kenneth stay behind, while Dylan, J.J., Maya and Jimmy head 6 hours away to the supposed college of J.J.’s dreams. Dylan quickly finds out the real reason for J.J.’s interest — the filming of “Bikini University 3,” a most definitely not family-friendly film that’s decided to shoot its next chapter on this campus and cast a “wheelchair boy” whose role it is to get a (very) close observation of a bubbly blonde named Ally’s “chest puppies” (Maya’s words).

Of course, Dylan would rat her brother out, but he’s got something on her – he knows about a secret snake that she decided to buy as a pet that her parents don’t know about, but somehow he does. Now that J.J. is blackmailing Dylan, and Ray is stuck at home trying to prove his coolness to kids who show up at his house for a party. Of course, it’s not the kind of party Ray wants to have (an Arabian-Nights themed party with kids his age) but more like an oversized (and overaged) day-care group, with Ray as the only “adult” in the room, until Kenneth arrives to give him such much-needed advice.

So, we have the typical “Speechless” plot setup. For falling into typical patterns and jokes so easily, this episode loses some points for originality. Additionally, the whole “Bikini University” idea is a bit tasteless, and borderline offensive; it just seems like the kind of sleazy subplot that would be more comfortable in an early 2000s flick like American Pie. Of course, it’s supposed to be sleazy, and is frowned upon by nearly all characters in the show except J.J. and the rest of the cast. There’s an artful criticism buried in it, as well, about how typecast actors with disabilities is ultimately offensive, limiting, and trapping. Still, it just doesn’t seem very likely that “Danton University” in 2017 would actually host this movie to film on campus.

Thankfully, the show’s redemption is also J.J’s redemption–that he proves himself able to direct, and in a compelling way, despite no experience, and simply a passion for film (watching too much TV was the reason he’d blown off his essay in the first place). His self-esteem at the outset of the episode is as typically insecure as any lost, distracted teenager’s, but there’s legit reason for it to grow now that he’s found something he can not only do, but do well. J.J.’s self-actualization is coming, and we’ll see if he can grow into his true potential as a finder of solutions and a helper of people.