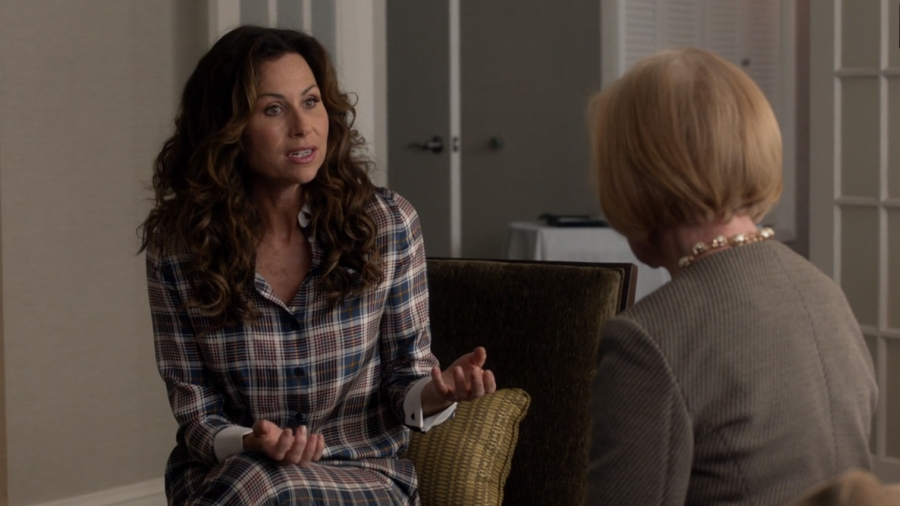 Sitcoms featuring dysfunctional families are comforting in a few ways: they allow us to process some of our own issues with family by laughing at the stylized, lightened versions of these often heavy dramas; they are (perhaps obligated to be) conscious of holidays, write their episodes accordingly, and remind us to slow down a little and celebrate; we can always rely on the characters’ problems being somewhat solved by each episode’s end, and some of us anxiety-riddled folk need to be able to escape into stories that have pleasant resolutions. Of course, most sitcoms have succeeded with this blueprint and never had a person with a disability in their cast, or maybe only included one sparingly, to send a quick message. Speechless has already included multiple actors with CP (presumably) in this season alone, and this guest-star-studded episode included yet another.

In frantic preparation for her mother’s arrival to Thanksgiving dinner, Maya dons a knockoff Burberry pantsuit, sweats a lot, smiles too much, and generally still can’t do much right – but she’s demanding that everyone in the family step up to the plate and help “play nice” so that her highly accomplished, snobbish, medical-scientist mother can finally approve. Jimmy points out that she may never gain that approval, but Maya’s deflecting is a testament to her constant denial of uncomfortable truths and realities.

Still, the well-intentioned desire to please her mother gives us a pretty hilarious lineup of mom-approvable characters: Ray, wearing a sweater draped around his shoulders, who gladly watches a boring British TV show that his grandmother likes; Taylor, who Maya’s mom mistakes as her granddaughter, and is already prim and proper enough to fit the bill, so is swapped out for Dylan; Kenneth, who invited his dad (Keith David) to the dinner, and spends the majority of the time yelling at him and singing with him; and Taylor’s brother Logan, who apparently has some beef with JJ from summer camp (“Nope, no time for this mysterious feud,” says Maya in the height of her stress). Rob Corddry even makes an appearance as Jimmy’s old friend Billy, who hasn’t yet accepted that he’s “lost a step.” The lineup is completed with Holland Taylor as the stuck-up grandmother from across the ocean, who gradually realizes she’s the cause of all the character-switching and what she calls “circus”-like behavior. (Pretty standard for them, though.)

The episode suffers a bit from cliche–for example, an uptight mother figure causing stress at Thanksgiving is indeed played-out. But its lesson is pure: yes, family relationships may always be tough to navigate, and this will always be revealed more clearly around holidays. However, as both Mom and daughter, there’s work that can be done–and more proverbial rats that can be killed.