Sobering news at the conclusion of last week’s episode about JJ’s ineligibility to graduate from Lafayette this year meant that we’d have to confront it head-on, and quickly–and this week’s episode wasted no time doing so. With a few less jokes than normal, the episode reverted to its more serious setting, and as a result gave us one of the more realist and necessary plot developments to tell a story that no other show right now is telling. 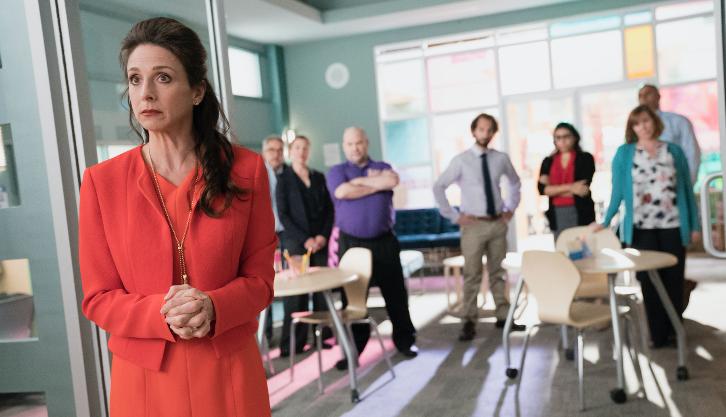 When Maya is informed by the typically spineless Principal Miller (Marin Hinkle) that JJ does not have enough credit to graduate high school, it’s quite obviously one of the more bitter pills Maya has had to swallow–for real this time. Miller doesn’t back down, although it takes every ounce of strength within her to “fight back” against feisty Maya (after Maya walks out of the room, defeated, Miller says breathlessly, “Please leave so I can collapse in peace.”)

So, when Maya decides to homeschool JJ and, she hopes, earn him enough credit to graduate, the standard hijinks come into play: terrible wigs as she plays various characters in the “school,” “guest speaker” instructors like WWII veterans that Maya mysteriously finds, and of course, her breathless French (with an excellent accent, of course).

Meanwhile, Kenneth’s storyline as a newly unemployed man attempting to regain the affections of his money-grubbing ex-wife is one of the flatter and more boring ones this season, as is Dylan’s, who wasn’t selected as team captain due to her unsportsmanlike attitude. The storylines are very “blah” mostly due to their predictability.

The warmth at the end of the episode, in true sitcom form, came with essential lessons: Dylan has a lot of work to do to become a better person (duh) and only realizes this after she pulls her leg during a race and is carried across the finish line by her teammates. The more important lesson, though, and the goal of anyone working with students with disabilities, is JJ’s: he learns how necessary his independence truly is to make it in the real world, and how it’s his job to grab the reins and pull himself forward. He bites the bullet, accepts that he’ll have to do another year, and will hopefully will fully commit to his studies back at Lafayette. DiMeo Academy, of course, was not a sustainable model. Problem is, these weak side plots with mediocre guest appearances aren’t sustainable either. Let’s cross our fingers and hope for more excitement next week as we plow ahead.

“I saw your wife’s car outside of the Red Roof Inn last Friday night” – Dylan’s threat to her gym teacher; his immediate response: “Have a nice race.”

A perfect Dylan-Ray burn, re: a video taken of her being hoisted over the finish line: “I’m gonna share it with all my social media followers.” “Mom already saw it, Ray.”