There’s nothing like a holiday theme to bring snap, crackle and pop to any sitcom, but since “Speechless” already has all of those elements (and others), it was in absolute top form with this LOL-packed and, dare I say, spooktacular episode. With Halloween just around the corner, a family sitcom was obligated to at least address the upcoming day, but “N-I-Nightmares on D-I-DiMeo S-Street” embraced it head-on, with our youngest characters having “fever dreams” that involve the entire family in some hilarious, freaky situations.

After the kids have broken into the ancient (according to exaggerating Jimmy, 60-year-old) Halloween candy stash, it’s found that all of them are suddenly sick. The first fever dream is J.J.’s, and it’s predictably a dream where he has powers beyond his current limited ones. Not just any powers–telekinetic, evil powers. This involves hovering a refrigerator menacingly over a supposed exorcist (and official ordained minister on “marry-my-friends.com”), forcing Kenneth to slap himself and skip, and make everyone who reads from his prompt screen talk in an evil voice. It’s definitely a semi-cheesy gimmick, but the trademark irreverence brings it to a level above corny, as usual thanks to the uber-talented actors on this show. 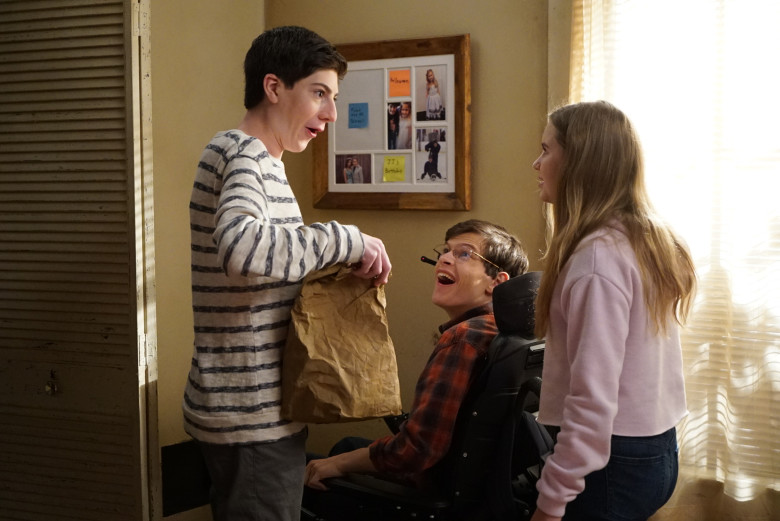 The next fever dream is Dylan’s – a direct reference to Freaky Friday and other “body-swapping” narratives, in which one person with a swapped body starts to get kinda comfortable in that foreign body – and it’s a testament to the skill of these young actors to push themselves out of their typical roles. The nightmare aspect for Dylan? Ray as Dylan denies to an adult that anything is amiss. The final nightmare is Ray’s, in which everyone in the family is placed in an escape room and forced to do things that they, as a family, struggle to do. Chronic procrastinator Maya rationalizes waiting until the literal last second to jump on a square and gets shocked. Jimmy is forced to dunk a basketball and can’t do it, then falls down into a hidden hole (“very deep,” he calls up from below).

Perhaps the goofiest, but best-done thread that weaves through this episode is Kenneth’s commitment to various Michael Jackson outfits. Not only are the costumes and makeup flawless, but Kenneth brings some of the best moments from the show – his goofy impersonations make for some killer one-liners (even if it’s just a whimpered “Shamone”.)

More locked-in than ever to its unique brand of empowering humor and quick wit, “Speechless” is guaranteed to satisfy in next week’s episode. Happy Halloween to everyone–and stay safe out there. Who knows, a refrigerator might be levitating nearby…