“Speechless” has suffered from a few hang-ups lately: standard hijinks that are too in step with characters’ set personalities; semi-dry plots with only a peppering of truly clever humor; cliched choices such as the most over-cast dog breed in the history of film and TV. Thankfully, “THE H-U-S–HUSTLE” provided the change needed to maintain the show’s sense of ingenuity, while not stepping too far into implausibility (with one glaring, if comical, exception).

When Jimmy and Maya decide to actually attend the fundraiser they’d committed to (surprise, surprise), they leave the van parked in a tow zone. It’s the perfect opportunity for shenanigans, and of course, they follow shortly, but in a refreshingly unexpected way: pressured by Dylan and JJ, Ray takes the wheel, not only moving the van up, but taking it for a long spin. Settling into his new bad-boy persona of “Blaise,” Ray drives with a look of cool confidence while JJ cheers him on and Dylan grows increasingly uncomfortable. The role switch throws off the standard balance and dynamic between the three–JJ and Dylan ganging up on grandparent-like Ray–so it’s totally reasonable that she’d feel the need to become the killjoy. 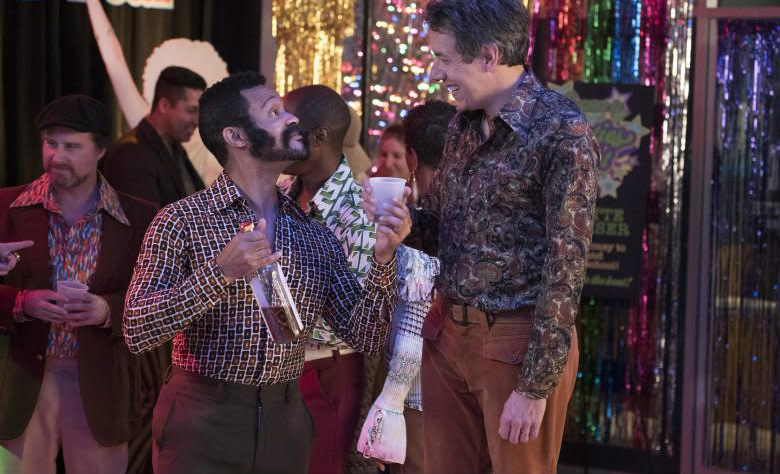 While Maya and Jimmy are at the fundraiser, a fresh new face emerges, and my hope is that she sticks around. Maya’s notorious for alienating people at the school, but she seems to find an ally in the jumpsuit-clad, witty Sarah (Lennon Parham), who encourages her “lawlessness” (e.g. helping herself to a concealed bottle of extra booze from under a table). Their chemistry is so perfect, it’s easy to see why Parham was cast in this role, and she’s perhaps one of the best-cast guest actors in recent memory.

After Maya discovers that Sarah’s interests may be directly misaligned with hers, though–that typical transformation occurs: Maya’s lips draw tight, her face hardens, and the fighter in her comes out. Trapping Sarah in the elevator is the impetus for the two to fundamentally connect, and it leads to a critical shift in Maya’s character: that of empathy for other students’ needs, not just JJ’s. The show has spent much time exposing how underfunded and poorly-resourced special education programs in schools are, and the same could be said for its commentary on society in general. It hasn’t delved much into this territory, however, of showing the problematic sides of one parent fighting only for their kid. Sarah and Maya go from quick friends to frenemies to enemies and back to friends, and it’s perfectly timed and spaced out for maximum heartwarming effect.

One impractical element of the story bruises it slightly–that full-grown adults really can’t process that Jimmy is wearing sky-high platform shoes and seem genuinely disappointed when he’s revealed to be not very tall–but in terms of humor, he (arguably) steals the show.

Kenneth to Jimmy: “Don’t make up hidden spaces to make your life seem interesting,” after Jimmy falsely warns him to not inspect a cabinet in the house.

Jimmy, to no one in general, upon walking into the fundraiser party: “No one is paying attention to me!…I store loose change in my butt!”