In its Season 2 premiere, Speechless opens with the DiMeo family in a characteristically moderate but self-induced crisis. A crew of fumigators has descended on the house, everyone’s disoriented, and the family busts out in a panic into their overgrown yard. Immediately, they face their critical neighbor who comments on the weeds and grasses, and everyone shouts back some form of an excuse. When they receive a message from J.J. that at his summer camp, “having a disability is not an excuse,” the tone is set for the rest of this week’s snappy, sunny premiere: the DiMeos are forced to change their tune, although their eventual slide back to typical rash decision-making leads to one of the sweetest moments of the episode. 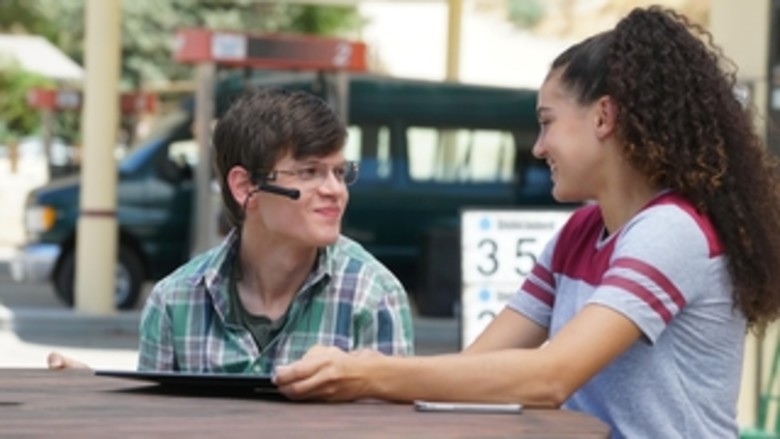 Of course, the disarray and clutter in the house has built up to a ridiculous level–napkins stuffed where the toilet paper roll should be, about a dozen bottles of almost-empty shampoo in the bathroom. The production design here is genius, capturing the essence of a family that just can’t get it together. The always-delightful Kenneth (Cedric Yarbrough) calls them out, to the tune of yacht rock band Looking Glass’ “You’re a Fine Girl” (as Jimmy notes in a smart cross-pop-culture reference, “It’s the song from Guardians of the Galaxyyy!”) and thus, the family finally decides to get it together, each in their own way. Dylan (Kyla Kenedy) starts mowing lawns for some cold hard cash; Jimmy (John Ross Bowie) finally starts arriving on time to work and somehow nabs a promotion just for doing his job correctly; and Ray (Mason Cook) finds, to his chagrin, that he doesn’t have as much to complain about now that his family isn’t so dysfunctional. Maya (Minnie Driver) starts going to the gym–although she questions it the whole time, and puts nonstop alarms and reminders on her phone. But when J.J. comes home, he makes it clear to her that she’s just busy for the sake of “playing busy” – and it’s at a detriment to him.

When Maya discovers a note from his summer crush, Alexa, they decide to go on an impromptu road trip to track her down – and a relieved Ray has a role as the “voice of reason” once again. After the van breaks down in the middle of the road, due to Jimmy’s refusal to actually put gas in the car at the gas station, the car gets towed – but, as they wait, Maya coincidentally spots the license plate of Alexa’s family car. When the teenage girl is miraculously spotted at the rest stop, J.J. is wheeled over to live up to that first kiss, making them both glow. Sitting up independently, a beaming J.J. falls after 20 seconds into his family’s arms.

Despite plenty of moments of goofy implausibility (it’s totally insane that the family found that car, for example), Speechless has always earned the benefit of the doubt. Its themes are consistently wholesome without feeling prudish; its messages run the risk of feeling canned, like a 90’s “do-good” sitcom, yet it never succumbs to out-and-out cliche or camp; and it’s consistently a joy to watch. Its creators have expertly balanced the characters’ big-heartedness with their bite and sarcasm, and pokes fun at the flaky, often immature behavior of the family, while reminding us that unconditional love and respect for J.J. drives them – across the country, into the desert, and back.