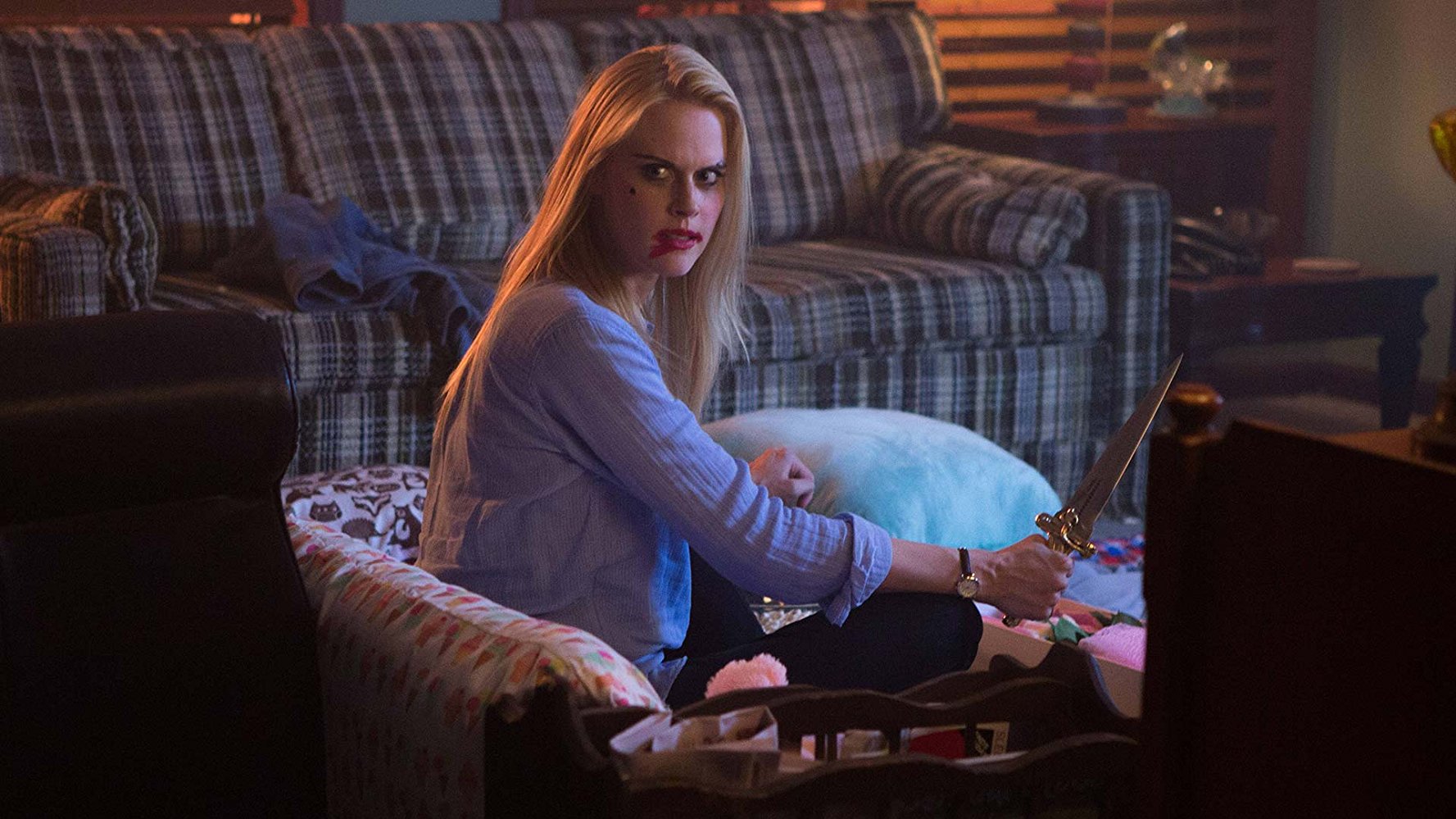 Stan Against Evil delivers two more hilarious installments with “Curse of the Werepony” and “Girls’ Night.” David Koechner guest stars as Evie’s ex-husband, Kenny. Koechner is in top form with Varney and McGinley. However, The Walking Dead’s Steven Ogg also shows up as the deadly and jealous werepony, Russel Horseguy Ponyman.

Werepony has been killing Willard’s Mill’s sheriffs since 1887, which makes him part of that demon corp’s 172 baddies, at its strongest. Evie is worried when her ex, Kenny is late returning her daughter Grace from their weekend. Stan suggests she attach some sort of tracker to his car but she thinks that would be an abuse of power. Kenny finally arrives in his old Camero pulling a trailer with a pony for Grace, Daffodil. He expects Daffodil to stay with Evie in Willard’s Mill. Evie is furious he didn’t include her in the decision but she build a post to hitch Daffodil in her yard. Denise is more excited than Grace and starts building Ponytown to make Daffodil more comfortable. 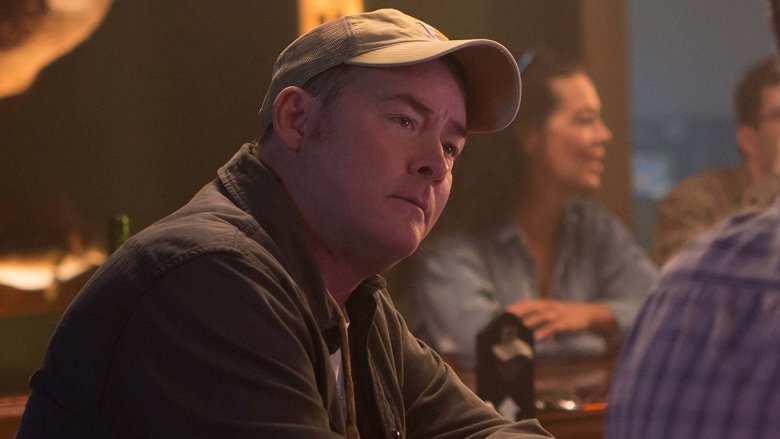 Daffodil unhitches himself when Evie isn’t looking and sneaks off to kill some pleasant lady hanging her sheets to dry. Then, it transforms into human form, Steven Ogg’s Ponyman. This transformation is wonderfully ridiculous. Nothing award winning special effect wise, but a perfect mix of prosthetics and comedy timing. When Evie returns, she finds Grace’s gift missing, but a man walks up on her instead. Ponyman says his truck went off the road when he dodged a pony crossing in front of it. He asks her to call him a tow and explains Daffodil will return on its own according to pony code. Meanwhile, Leon discovers the dead woman’s body and call’s Evie.

Leon thinks the woman was murdered, but Evie thinks the bite marks indicate animal attack. Meanwhile, Stan and Kenny have a few drinks at the bar. Kenny plans to reunite with Evie, he needs to get back on her health insurance before his teeth crumble. Stan offers to let Kenny stay at his house for a while, to enjoy more man time. At first, he thinks it’s great, he even tells Evie she should consider taking Kenny back. Evie appropriately tells Stan to bud out. Kenny tells Evie he plans to move to Willard’s Mill so they can get back together, but she assures him that will never happen. Koechner makes the destruction of Kenny’s heart a hilarious sequence. One of Stan Against Evil’s strengths is letting their talent run funny. 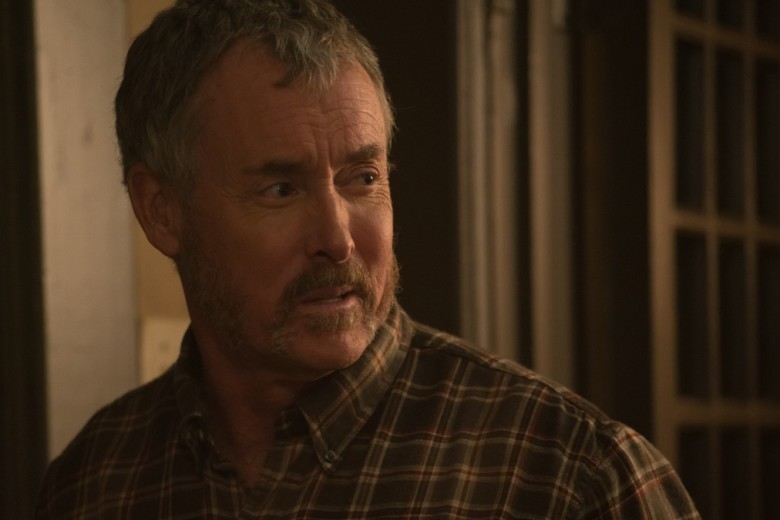 Stan asks Kenny to leave when he finds him drowning his tears in ice-cream. Ponyman stalks Kenny and offers to buy him some beer. Here, we discover Ponyman was sent to kill Sheriff Evie, but he got a crush on her and couldn’t go through with it. When Kenny asks if he plans on killing him, Ponyman says “I’m no killer, but the pony needs blood.” He transforms in front of Kenny, which grosses him out, but Evie and Stan arrive and shotgun the werepony to death before it can hurt him. I keep wishing they’d extend Stan’s season, now I add more episodes with Koechner to the wish list.

The second episode, “Girls’ Night” featured guest star horror icon Jeffrey Combs and gave Janet Varney a little more feature space. That’s another reason the show either needs to be longer or shoot more episodes. A twenty-minute episode isn’t long enough to give both Varney and John C. proper feature time. Again, this starts with the villain’s backstory. We see him as a carnival shell-game conman who bets the 1816 constable all the prizes on stock against the constable taking his own life. Of course, the conman wins. Then, he reappears in the future as the host of Denise and Evie’s favorite girls’ night reality show, The Fiancé. Stan heads to the bar, he can’t stand the thought of being in the house while they have their fun, but he runs into the same conman there. 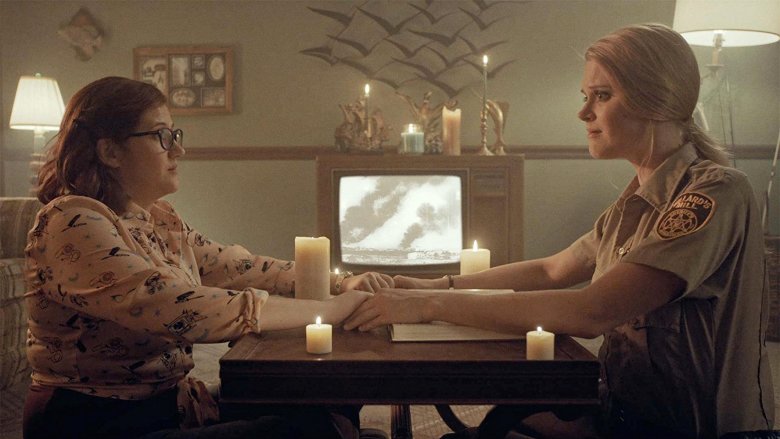 The conman tries to catch Stan with his betting trick but somehow Stan manages to both lose and thwart him in the process. After the man eats an old jar of pickled eggs, Stan calls him on being a demon assassin. The man explains he started off as a fortune teller, but constable Eccles burned him at the stake for being a witch. He has limited demonic power and transports Stan back in time to the shocking moment young Stan kicked a dying man to death and knew he wanted to be a police officer.

Meanwhile, the Fortune Teller commands Evie through her television show. He suggests that Denise is working against her and she needs to do something about it. At one point, Evie asks Denise to get her some make-up. The result is a hilarious, disturbing look of smeared lipstick and eye liner. Eventually, the Fortune Teller host transports her one of his special daggers to kill Denise. Luckily, Leon crashes girls’ night right when Denise really needs him. They try hiding from Evie, but she hunts them room to room.

Back at the bar, the Fortune Teller bets Stan that he can’t make it home before one person he loves murders another person he loves sending him into so much rage that he murders the killer. Everyone is still alive when Stan arrives, but Evie’s still crazy with the dagger in her hand. Stan bets the Fortune Teller his life against all of theirs over an impossible coin flip. The Fortune Teller can’t resist, but Stan wins. Fortune Teller burns down to ash which releases Evie from her spell. Both of these episodes were laced with visual and verbal references to The Shining. This marks the midway point of the second season. How are there only eight per season?