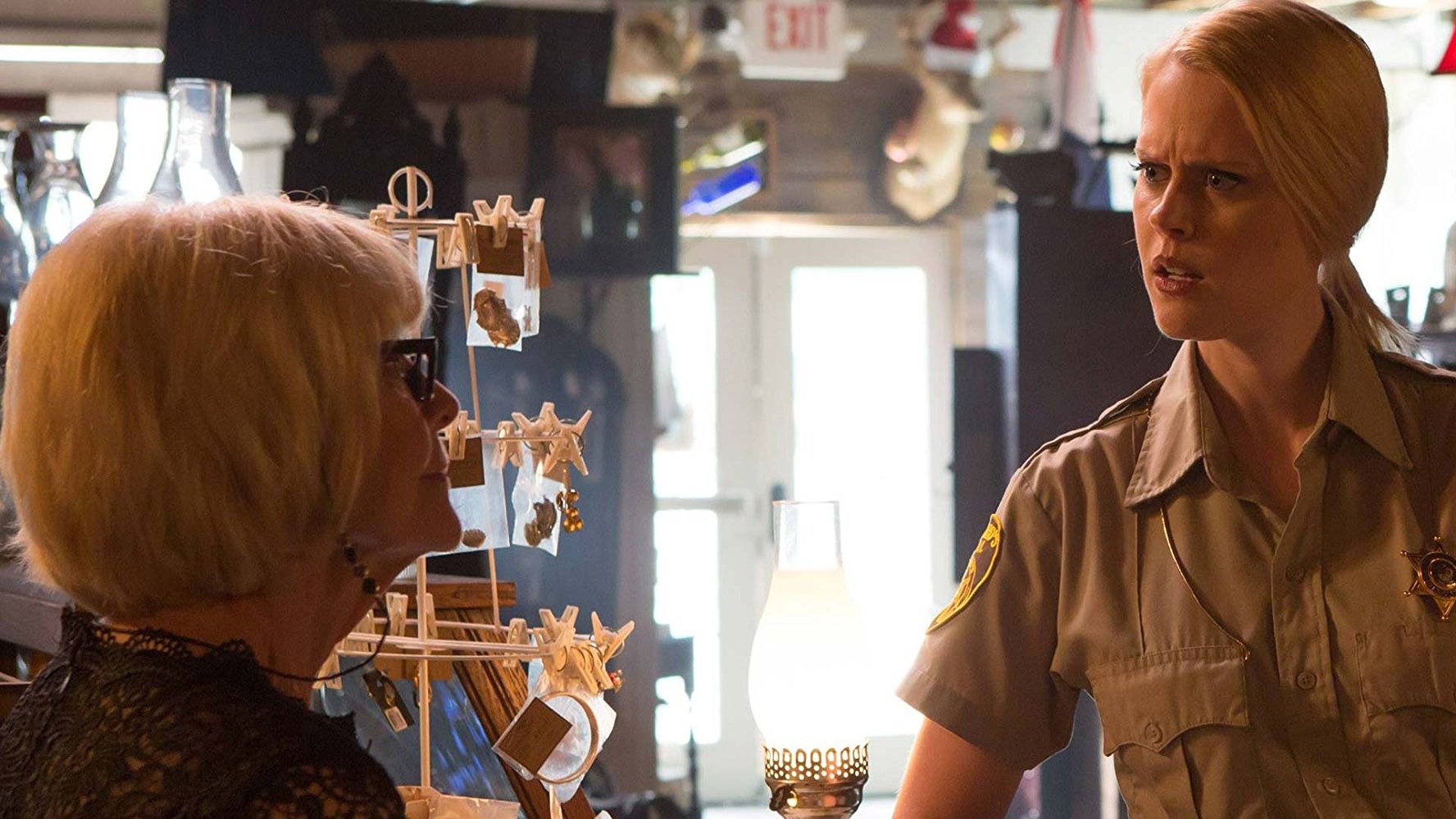 Stan Against Evil explores the evil side of loneliness and obsession in “The Eyes of Evie Barret” and “Hex Marks the Tot.” Trouble begins when Evie pulls over a local A-hole for speeding. He doesn’t try to get out of the ticket but he does try to get into her… schedule. She tells Stan it happens all the time when she’s one duty. Stan tells her his wedding ring kept unwanted advances in check, besides everything else about him, it says he’s not available.

Evie considers the idea and heads to the local classy antiques shop. Ms. Atherton hears her plan to find a wedding ring to ward off pushy men and gives her a special band, free of charge. She says she’d do anything to help the police. Evie is psyched to test drive the ring, but that night, Evie dreams of slicing the speeder’s throat with a long, razor sharp nail. She wakes in a panic and receives a call from Leon, another murder. The per capita in Willard’s Mill must be crazy.

The corpse on the sidewalk is the speeder Evie dreamed of killing. She dusts his face for prints and finds a few, she thinks they might be hers. While they wait for the body to be processed, Evie drops in on Stan and tells him she thinks she killed a guy. At the same time, a young woman, Fiona, rushes into the police station pleading with deputy Leon for a restraining order against her crazy boyfriend. Leon stands up to the guy when he enters a moment later, but the guy gives him a serious beat down. He’s about to kill him when he has a sudden, massive heart attack and drops dead on the spot. 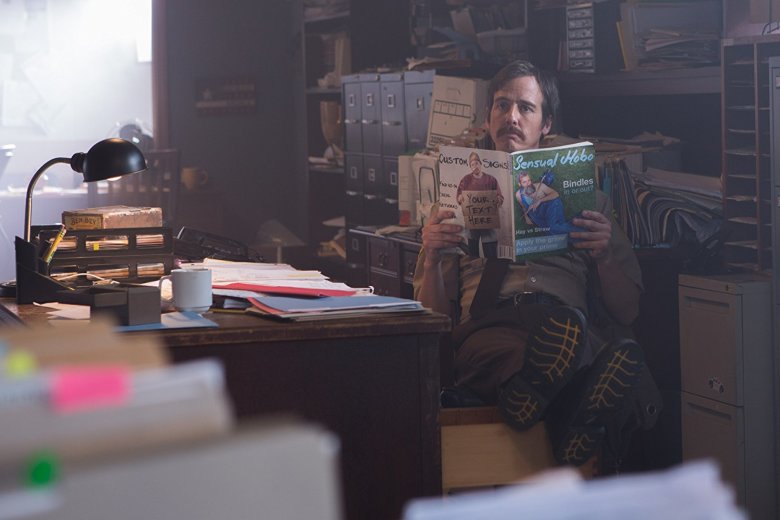 When Evie finds out Leon also killed someone, she asks Stan to watch her and make sure she doesn’t hurt anyone when she falls asleep. Stan’s busy watching the Rock Hudson thriller, Ice Station Zebra, so Denise volunteers. Evie has DVD’s to watch, but Denise prefers to dramatize the titles herself. Eventually, Denise doses off, as hard as Evie tries to stay awake, she drifts off too. Again, she dreams of murder, this time the victim is Stan. She sees herself sneak into his bedroom with that really long nail, then she wakes up. Evie calls Stan to see if he’s still okay. He wakes up grumpy, the only choice, but senses someone was in his room. He goes to the window and sees a woman running away from his house. Now, they know they’re dealing with a demon.

Evie and Leon return to the antiques shop to question Ms. Atherton about the ring’s origin. She confesses she’s had the ring for over 200 years since she stole it from the constable’s wife in the 1850’s. Eccles approached her and made a pact, long life for killing the constable. Now, she just wants to kill Leon and Evie. Evie suggests she marry Leon and he reluctantly agrees. Once they say “I do,” the demon widow ages rapidly and bursts into dust. Evie still gets to keep the ring. 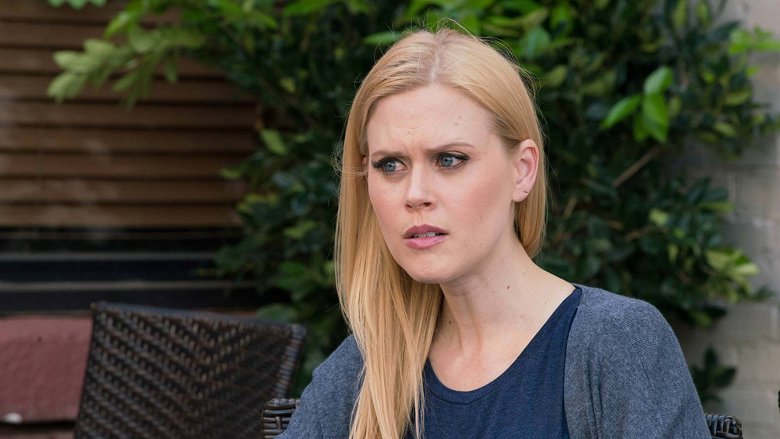 The second episode, “Hex Marks the Tot,” cranks up the creepy factor. There is the second season opening flashback to Willard’s Will, 1986. An eager young man drops in on single mom, Stacy, for a stay home date, her baby is crying in its crib. A few minutes into the intrigue, man in attacked by baby. This was the 80’s, babies didn’t play around. Fast forward to modern day Willard’s Will, Evie and Denise have lunch and talk relationships. Denise needs to do more with her life than waitress for Stan, Evie talks to a woman, Gina, about Denise babysitting her child. Gina is thrilled to get help with baby Aiden Braiden.

Gina gives Denise the basic rules, but she says the most important is Aiden’s baby rattle, he can never be without it. It’s a lot for Denise to handle so she takes Aiden out in the stroller. Stan is actually upset Evie got Denise out of the house. Grave digger Kevin catches up to Denise on the sidewalk, they have a delightful and awful chitchat, then he sees Aiden’s eyes go completely black. He tries to warn Denise that the baby is weird, possibly dangerous, but Denise thinks he’s jealous. Stan drops in with lunch, two beers, the same he had. Stan spots Kevin stalking Denise on his way out, he warns Stan about the weird baby, but Stan isn’t concerned. 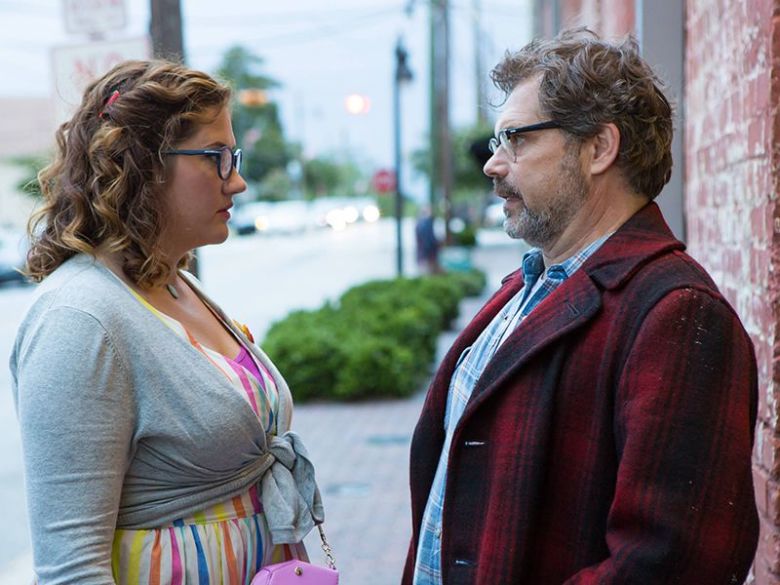 Later, baby Aiden sneaks out and breaks into Kevin’s house to terrorize him. This is a creepy horror stalk scene that ends with demon baby Aiden attacking Kevin. The next day, Stan finds Kevin in shock wandering around by the train tracks. He brings him back to the police station where Evie calms him down enough to make a sketch of a baby face. At first, they think Kevin is jealous Denise is spending time babysitting Aiden. Denise returns and explains Aiden is wearing her out. She also mentions Aiden never eats. Evie cracks open their demonpedia and discovers a match, an Emotional Cluster Feeding Demon. The demon feeds off the affection of their caregiver, in this case, Denise. It targets people who capture the attention of their caregiver.

They track Aiden to his “slayland” lair which is decked out like a baby-alien hive. It’s straight up nasty. They find Kevin and others swaddled to the walls and covered in demon baby mucus. They scrape Kevin free but Aiden attacks. Evie tells Denise to hurl insults at the baby which distracts it long enough for the group to attack. Evie shoots the baby rattle which kills the demon. Finally, Stan’s research shows Gerard Duquette as a sorcerer, dead for over a hundred years. He still has a long way to go before he figures out how to save his wife.