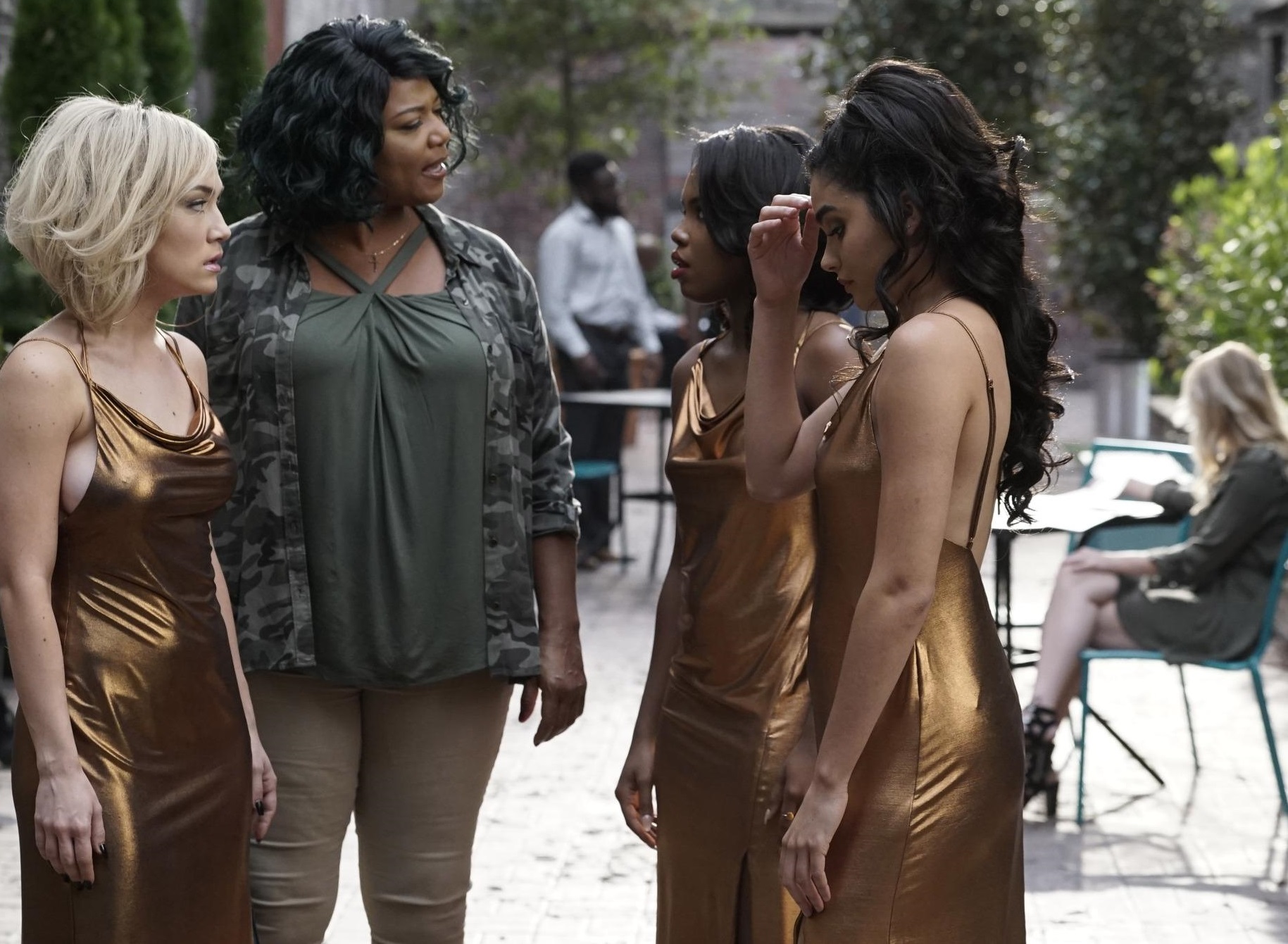 STAR is getting formulaic. Star (the character) does something stupid, Ayanna punishes them, Big Trouble defies the punishment, Ayanna gets frustrated, Big Trouble sorta wins. Rinse and repeat. It’s not that it’s bad, it’s just fallen into a groove that is being almost Entourage-esque. “Vince has to do this movie,” has turned into, “Star has gotta get on that stage,” and everyone else is nothing but a stepping stone. Though the other characters on the show have wants and desires that suit them, Alex in particular is also falling into Star’s mold of a character. It seems like Alex only desires goals, never pausing for moments around her and it’s negatively affecting everything else in her life. But the focus is on Star, how is she going to win (or fail), and what we can expect from Big Trouble. 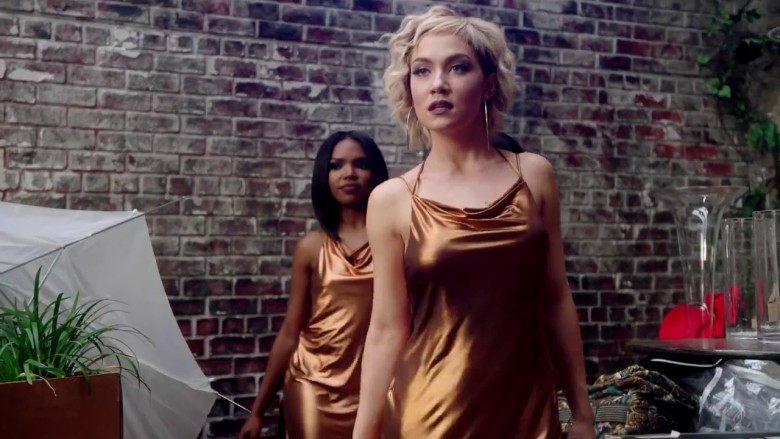 After Star finds out that her father is in town, she decides to lose her mind and strangle Ayanna’s social media manager. Because of this, Ayanna writes Big Trouble off the list for her super exclusive party where she will try to add people to her label because that’s every episode of this show. So instead of focusing on her father or Simone’s feelings or Alex’s shoplifting, the girls decide that their time would be best spent crashing this party. It’s not just the party that gets them excited though. The girls believe that this is their best opportunity to usurp Ayanna once and for all. It’s a horrible idea, but the group is floundering. They absolutely bombed their performance at the mall, they’ve managed to miss opportunity after opportunity, and Star literally strangled a woman to the floor. Desperate times call for desperate measures and so when Star tells her bandmates that they should storm the stage and start performing, all of them say… why not.

The strange thing is that the performance goes extremely well. At first this is played like a positive, but in reality, it’s a very sneaky negative. I’ve been praising this show for focusing on the music, but at this point even I have to say these people personal lives need some TLC. I mean Derek was slapped by his grandmother and then push out of his wheelchair by a couple of racists for defending a Muslim. And Alex is nowhere to be found. Miss Carlotta decides to go to church with her A&R (I don’t know either) and comes to terms with enabling the kids’ mom, but Simone wasn’t there to hear this confession. And Jahil is struggling to get his new track off the ground, but Star is nowhere to demand to be on it. The girls are so convinced that their path to fame and fortune is through Ayanna, but is it? Ayanna is in a very precarious position, where her father is expecting her to bring a big name to the label. The big name she wants is Keke Palmer. Though the girl group literally has “big” in their name, it should be noted that Alex introduced the group at the party as, “Alex, Star, Simone,” also known as ASS. Ayanna doesn’t want ASS. She wants someone that’s going to turn heads on paper, and so every time Star pushes her, Ayanna eventually relents. Star thinks this is because she’s pushing her, but in reality, it’s because Ayanna doesn’t care. Without a big name the label will fall apart, with or without ASS. 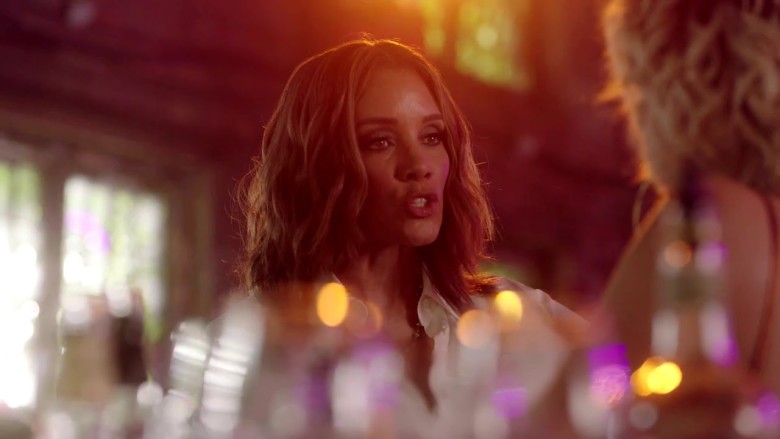 While being reintroduced to Jesus, Miss Carlotta gets a call that Simone has ditched on her parole to drink liquor and almost kiss a girl. Miss Carlotta is pissed, not because of the parole or the girl, but the alcohol. She admits that she sees Simone’s mother in herself and that it’s not a good thing. Simone idolizes her mother and so to hear that being like her is like a disease doesn’t sit well. She laments that she should be able to burn herself out like her mother did because it’s her life, but Carlotta makes it clear that she’s her mother now. This is a change from the Carlotta of old, that would’ve assumed the church would raise Simone as long as she brought her there. Carlotta is taking responsibility in a whole new way, both with her own daughter and her adopted ones.

Cotton and Jahil have a meeting of the minds that ends with them agreeing they should stop doing cocaine and start being more serious about their lives. It seems like Jahil is playing more of a mentor role to his daughter than what might have been expected. It’s good to see these two characters come together, but you just know the future to this plot is going to end with Jahil kicking someone’s ass for Cotton.

The rest of this episode focuses on relationships. Star goes back to her father and tries to read through his lies, but can’t. When he pulls out a picture she drew of their family before he left, she starts bawling. It’s not just that she feels touched, it’s that she feels confused. This is supposed to the person she and Simone could’ve depended on. To put it in perspective, if he played the role of the father, like he should’ve, Simone wouldn’t have been raped. So, if anyone finds Star’s unwelcoming approach to her father confusing, just think of it like that and it all makes sense. In order to get over her father, Star has sex with Noah in the studio. If that sentence seems abrupt, so was the scene.

For as formulaic of a show as Star is becoming there are some confusing aspects to it. Why the girls continually keep getting caught in this loop is especially confusing. It seems like if Ayanna just explained to them that she needs a big body on the label, the group would be able to shift focus. Alex might be able to call her father, Star might be able to convince Andre 3000 after having sex with him, Simone might meet her in jail! But until that happens this show will continue to spin its wheels.