Why would you blow it? You were almost there STAR. I can show you the receipts. My notes had gushing praise, as your tone and theme and plot were all aligned and you made me BELIEVE in you. You even called out your past mistakes! Alex perfectly summed up my feelings when, after things go crazy, she said, “WEREN’T WE JUST SUPPOSED TO START A GIRL GROUP?!?!” YES! I even called this episode the “Episode of Quotes,” because there were so many great ones. I had this whole review plan where I would rank them and we would talk and laugh and laugh some more. And then, when you sucked me in with the greatest scene of the series to date – when Pastor Harris is using God to manipulate Cotton into believing she is a man as she helplessly asks her mother, “Am I man? Momma, am I man?” Miss Carlotta shakes her head, the weight of her wants and desires conflicting with her child’s, she can do nothing but… RIP HER FACE OPEN WITH SOME MICROSOFT POWERPOINT TRANSITION AND LEAD INTO A SONG ABOUT REAL HAIR VS. FAKE HAIR?! What the hell is this trash show?! How do you do this? Who signs off on this? This is the only way the development meeting could possibly have played out:

“Hey Lee Daniels, you know how Star does those trashy music videos and songs at inopportune times?”
“Um, remind me?”
“You know, like when Simone was in a mental ward for trying to kill herself, you turned that into a ‘Basket Case’ type ballad?”
“Oh, yes, absolutely.”
“Well what we have here is one of the best emotional scenes we’ve seen in a long time. Let’s ruin that by injecting a complete non sequitur of a song, smack dab in the middle of the emotional climax.”
“Only if Queen Latifah can rap and we come back into the scene just as awkwardly as we left.”
“Sounds like a compromise.”

I hate that I have to do this because there’s so much good stuff to talk about in this episode, but the transition really is one of the worst transitions in TV history. It can’t even live out its legacy as a meme because the song is also like 3 minutes long. But that’s where we are with Star. It’s a show that will find new and creative ways to let you down.

As far as the build of the episode goes, it starts off rocky but really smooths itself out over the course of the plot, a rare thing for Star. For the first time since the pilot, I felt like Star finally had a good grasp of its world and the consequences that go with that. Derrick being falsely accused of beating up a cop and being held at $250,000 bail? Yeah. The girls assuming they could throw a block party to pay the bondsmen at $25,000? Yes. The girls failing to accumulate $25,000 from 60-80 people? FINALLY. Star understood who their characters are and what their setting is all about. Though the $15,000 that they raise seems kind of high (roughly $200 per person – definitely possible), it’s not a figure anyone would argue with. And their failure represents conflict, stakes and a punishment for taking the easy road again! They can’t just keep assuming they can sing their way out of real problems. Finally Star has shown us that these girls are not as popular as they think they are. There’s a great scene that in a vacuum would look idiotic. Eva films and posts a video of her singing with Simone and Alex at the rally from last episode. The video has gotten 30,000 views and Star is fuming at missing out of the “high view count.” 30,000 is absolutely nothing. Your brother’s sack tap video probably has three times that amount. But it’s a great scene because that’s the ignorance of these characters. Their egos mixed with their bubbles and community makes it impossible for them to rationalize how small of a view count that is. It’s that same thinking that makes them assume they could get $25,000 at a block party.

As great as the accountability felt, there was also a very interesting theme throughout this episode. It’s subtle at first but it becomes easier to see as the episode evolves. Essentially the theme of this episode is that “Men are bad,” or probably better put “Men corrupt women,” and it’s interesting to see play out. Derrick makes Alex think he will take a plea deal that will forever ruin his life. You have to think that Derrick is telling the truth here, but when you put it in the context of the episode it becomes way more muddled. He might have been playing rich Alex to get the money he needed for bail. Not only that but Pastor Harris’ constant fear of Cotton’s sexuality and transitioning essentially makes Miss Carlotta slap her child across the face. Afterwards Miss Carlotta is extremely apologetic and although it’s clear she’s not a good mother, the episode makes you think that she’s finally acknowledged that and is trying to be. Juxtapose this slap with the other from the episode – when Hunter slaps Star after she begins to ask him for money. Hunter later apologizes but the apology comes much later and he offers no solutions for personal betterment. He just says he’s never done that before and he’s sorry. And Star rejects him… for now. Then there’s Jahil who has convinced himself he knows what’s best for the group-yet-to-be-named and has decided to add Eva to the cast. And then back to Pastor Harris who tries to “convert” Cotton back to being a man and is aggressively thrown out by Miss Carlotta. 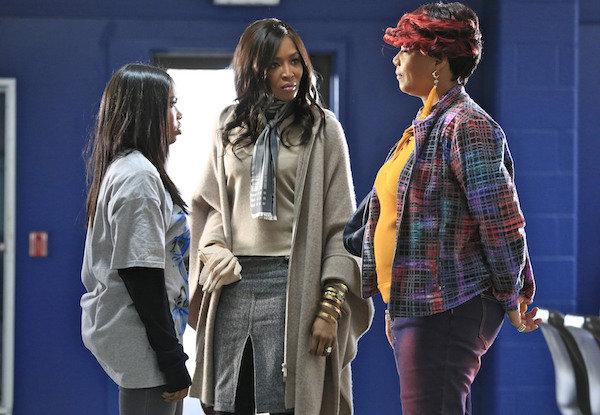 But the most interesting encounter is when Alex’s mom tells Alex that Derrick will break her heart. This is someone that, despite the off screen baggage, we’ve only seen the mother love her daughter. Her reasons for lying to Alex are… nonexistent. If she was trying to “kidnap her,” telling her lies to make her give up, she would have already done it. All we can assume, especially given the theme, is that she’s telling the truth. Alex’s mom is someone who has been deeply burned by a man and the last thing she would ever want is for her own daughter to follow the same footsteps. Only time will tell if she’s right, but I feel like a lot of fans of this show are going to see the Derrick/Alex reunion as something to celebrate, instead of an impending doom.

If it wasn’t for the worse transition of all time, this would’ve been the best episode of the season. But an episode put together like this one is hopefully an earnest look into what’s to come. If Star delivers at this level next week, it could finally be the show I rooted for after watching the pilot.