“Everyone wants to be a star, Star.” That is a line from this week’s episode and I am not too happy. OK, OK, congratulations. You guys were right, STAR sucks. But honestly, I don’t regret a thing about my pilot review. The pilot was a dark, weird show with a lot of strange humor. A lot of people took to compare it to Empire which I vehemently disagreed with. Would you compare The People vs. OJ to Scream Queens? Probably not, and if you did, you’d look pretty foolish. I feel the same way about the Lee Daniels comparisons. The problem with Star is not that it’s not Empire. The problem with Star is that it’s a bad show. They’re constantly trying to get you to assume that girl groups still run the world, and they just don’t.

I think a show you can compare Star to is Atlanta. Here are two shows trying to portray what it’s like to break into the music scene of Atlanta. Both portray Atlanta as a dichotomy, but only Atlanta feels exciting.  The Atlanta in Star is this miserable place where everyone wants to have sex with underage girls and only talk about strippers, Jesus or girl groups. Many of us would call this a nightmare. But perhaps the biggest issue between these two shows is that Atlanta’s entire being is how hard it is to make music in the city that everyone wants to make music. And how jealous people are either trying to take pictures with you or hating from a healthy distance. Star portrays the common people as either being vehemently against music or shadily enthralled by it. And you can see the effort that the show takes to make everyone fall into these lines, having half the cast spend their nights in church and the other in a strip club. Not only is not realistic, it’s not fun to watch, so you become aware of every moment you need to suspend disbelief, which is a lot.

The problem that people make by comparing Empire to Star is that they assume the messiness in Star means it’s also a soap opera. But this is just not the case. A soap opera has to have some semblance of self-awareness, with a mix of serious and camp that is no easy primetime feat. Empire is not an easy show to write, and it’s a misconception that a show like Game of Thrones or Homeland is more highbrow. It’s not. And honestly, maybe not the first season of Homeland or Game of Thrones, but any other season of Empire is entirely more difficult to craft than any season of either of these other shows. Which gets into why Star isn’t making the cut. It lacks the essential elements. Star has literally no self-awareness, takes itself far too seriously, and the jokes do not come out of camp, but rather out of dramatic moments. Star isn’t a soap, it’s a drama, and it’s a bad drama. Now that I’ve fully explained why I feel comfortable with my review from last week, and why this week’s review will be much harsher, let’s get into it.

Not a lot happens. Which is something that you will never say in a true soap opera. OK, I need to stop doing that, my point’s been made already. Alexandra starts getting serious with Derek, then goes to the salon where she begins dancing to “Groove is in the Heart,” and is reacquainted to her parents. Yep, the jig is up, everyone knows her parents are Naomi Campbell Rose Crane and Lenny Kravitz Roland Crane. Just to be even clearer, they are playing heightened versions of themselves. Star is angry at Alexandra because at no point did she ever mention that her father was essentially the real Lenny Kravitz, who could really give them a boost to their music career. Alexandra pushes the “I told everyone my mom is dead because she’s crazy, and my dad is selfish,” card, but even I’m not buying it. At no point do we see Rose do anything bad, check that, even brash. In a flashback she tells her daughter to stop jumping in a limo, at dinner she tells her daughter to come back home, in a hotel she tells her husband off for having sex with an underage girl (he doesn’t) and at their last dinner together, she tells her husband to apologize to their daughter. VERY NORMAL STUFF. Alternatively all we hear Alexandra say to her mom is, “stop being drunk,” and “you’re drunk” and, “Get help because I can’t help you because you’re drunk.” It’s bad. It’s bad writing, it’s bad storytelling, it’s bad directing. It’s just bad. 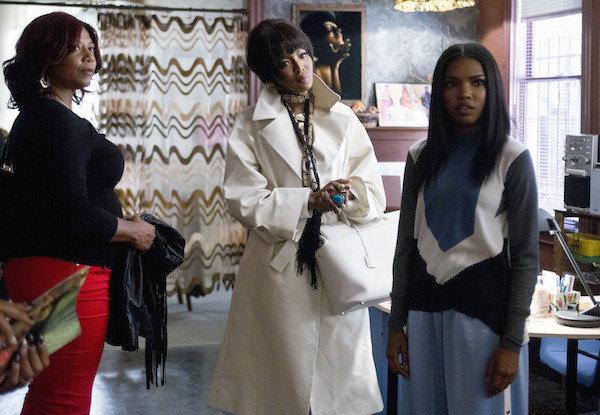 Alexandra gets into a fight with Star because guess what – Star is that underage girl trying to have sex with Roland in a hotel. If one of your 16 or 17 year old friends tried to have sex with your dad, I’m positive you would be mad too! The weird thing is that we never really get an apology for this, which would be cool and kind of Don Draper-y if Star didn’t make amends by calling herself a whore. It would be less of a personal attack if she just apologized. But for what’s it worth, maybe Star doesn’t really have pride as much as she just does whatever she wants. After all when Jahil Rivera tries to sell her on a solo career (which makes much more sense) she immediately rebuffs and drives away. Part of me feels like Star is just wired differently.

Speaking of wired differently, let’s check on Simone. After having the worst foster care experience of all time, Simone has taken up to secret habits of pill popping and alcohol to keep the nightmares away. And if this sounds interesting to you, it’s because it is. What’s not interesting is that Simone is tied to the worst character on the show, Miss Carlotta. Carlotta does nothing for the plot except TELL people that the past was bad and that since she’s found Jesus everything is great. But we don’t SEE any of it. Sure we see her visit a very sexy priest played by Tyreese, but at no point does Carlotta ever truly seem that religious or welcoming. She cries about how she’s “lost” the girls to music, questions her role as a matriarch and asks blunt questions without the pursuit of blunt answers. At one point she literally asks Simone “Why are you waking up in the middle of the night screaming?” and is cool leaving that question hanging in the air, answerless. If anyone is drunk or a bad mother, it’s not Rose, it’s Miss Carlotta.

There really is no end to this episode. It built to nothing and then it stops. Simone passes out in church from all the pills and alcohol and she’s rushed to an ambulance where it’s made to look like she died, but IMDB credits will tell you a different story. False deaths are a cheap way to act like there’s a natural breaking point in the story. But honestly everything about this show kind of feels like a cheap trick. I really hope it’s just this episode, but something tells me this show is and will continue to be bad.