After the lukewarm reception of J.J. Abrams’s sequel Star Trek Into Darkness and a rocky road to production, it seemed that STAR TREK BEYOND was destined to be a disappointment. Behind-the-scenes drama led to then director-writer Roberto Orci parting ways with Paramount on the project. To add fuel to the fire, the movie’s first trailer was so unimpressive and corny that even actor and new co-writer Simon Pegg spoke out against it. Understandably, this led to the radio silence from Paramount as the world saw little to no publicity or marketing for the doomed movie. Nothing was working in the favor of this third installment of a reboot of an iconic sci-fi franchise. Because of this downward spiral of unfortunate events, film critics and Trekkies were wringing their hands together, ready to tear this movie apart. But, alas, their devilish hand-wringing will come to an end when they find out that Star Trek Beyond stands out as one of the best big budget blockbusters of the summer.

Fast and Furious helmer Justin Lin takes over the directing reins from J.J. Abrams (who is still a producer) for the third notch of this reboot that starts in the middle of the Starship Enterprise’s five-year epic voyage across the final frontier. After rescuing a stray ship, they encounter mysterious new enemy Krall (Idris Elba, who did a lot with what could’ve been a lame two-dimensional villain) and his swarm of baddies as they tear the Enterprise to shreds — literally. Upon the destruction of the ship, the crew is split up and stranded on Altamid, a dangerous alien world. Turns out that separating the crew on an unknown planet to work for a common goal works better than force-feeding audiences another Kirk/Spock-centric story. It’s been established that these two are best bros. The franchise was one Vulcan high-five away from becoming I Love You, Man in space. Pegg and co-writer Doug Jung have created a fleshed-out story that makes the franchise recover from the aftermath of the muddled and overbaked Star Trek Into Darkness. That combined with Lin’s ability to compose kinetic and dynamic scenes made the movie excel in action, adventure and move forward with a confident pace that a summer blockbuster is supposed to have — especially with the lackluster string of “blockbusters” that have been dragging their feet to theaters as of late.

As much as it pains the audience to see the epic destruction of the Enterprise (it’s pretty damn awesome, though), it’s a necessary evil in the movie to raise the stakes and incline us to be invested. And to see the crew apart from each other makes thing even more interesting because this is the first time in this particular Star Trek universe that we have seen these characters, who we have grown attached to, separated. They are without their trusty homebase and to see them function in pieces rather than a whole adds individual character and proves that they aren’t one big co-dependent family. 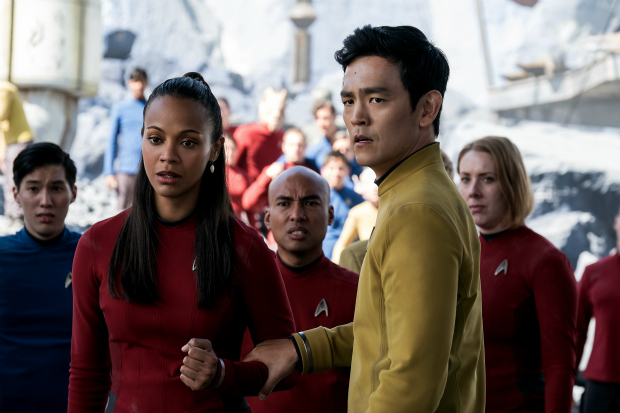 As bonafide Star Trek fanatics, Pegg, Jung, and Lin made sure to slip in homages into the movie without making it feel so exclusive. The biggest nod is the unlikely pairing of the uber-pragmatic Spock (Zachary Quinto) and the frazzled Bones (Karl Urban, who slays every second of his screentime), a fascinating and enjoyable dynamic seen in the original series. Without taking away from Rodenberry’s source material, Beyond molds its own Star Trek timeline as we see Kirk (Chris Pine) mentor the infectiously optimistic Chekov (Anton Yelchin); Scotty (Pegg) befriend hip-hop loving renegade Jayla (Sofia Boutella); a newly single Uhura (Zoe Saldana) and “I-didn’t-know-he-was-gay-but-it-shouldn’t-matter” Sulu (John Cho) try to fight their way out of the hands of Krall. To see a fractured team attempt to reunite and rise to the challenge of beating a lizard-like foe who harvests people from space to suck out their life force is satisfying and delivers a much-appreciated pay-off.

The theme of family and “working as a team” is felt throughout the film but is magnified more considering the passing of Leonard Nimoy and the most recent death of Yelchin. Star Trek Beyond is weighted with a heavy heart as Pegg and Jung incorporate an appropriate storyline to Nimoy that pays  respect to the original Spock, who also appeared in the previous installments. With Yelchin, there is a mix of joy and mourning when seeing the talented young actor on screen, an all-to-familiar feeling similar to that when we saw Heath Ledger in The Dark Knight. In the end, the movie honored the two appropriately and they will live on forever in one of the most beloved franchises in cinematic history. One could argue that the bar was set low because of the let’s-just-act-like-it-didn’t-happen Star Trek Into Darkness, but considering its challenges, production spats, and lack of enthusiasm leading up to its release, Star Trek Beyond  delivers the goods in a summer season of lame and disposable cinematic fare. It’s an entertaining thrill ride that moves at warp speed and although it’s not the best Star Trek movie of all time, the cast remains united and strong and Lin adds a new energy and refreshing voice to the Star Trek franchise that services Trekkies and civilians alike.