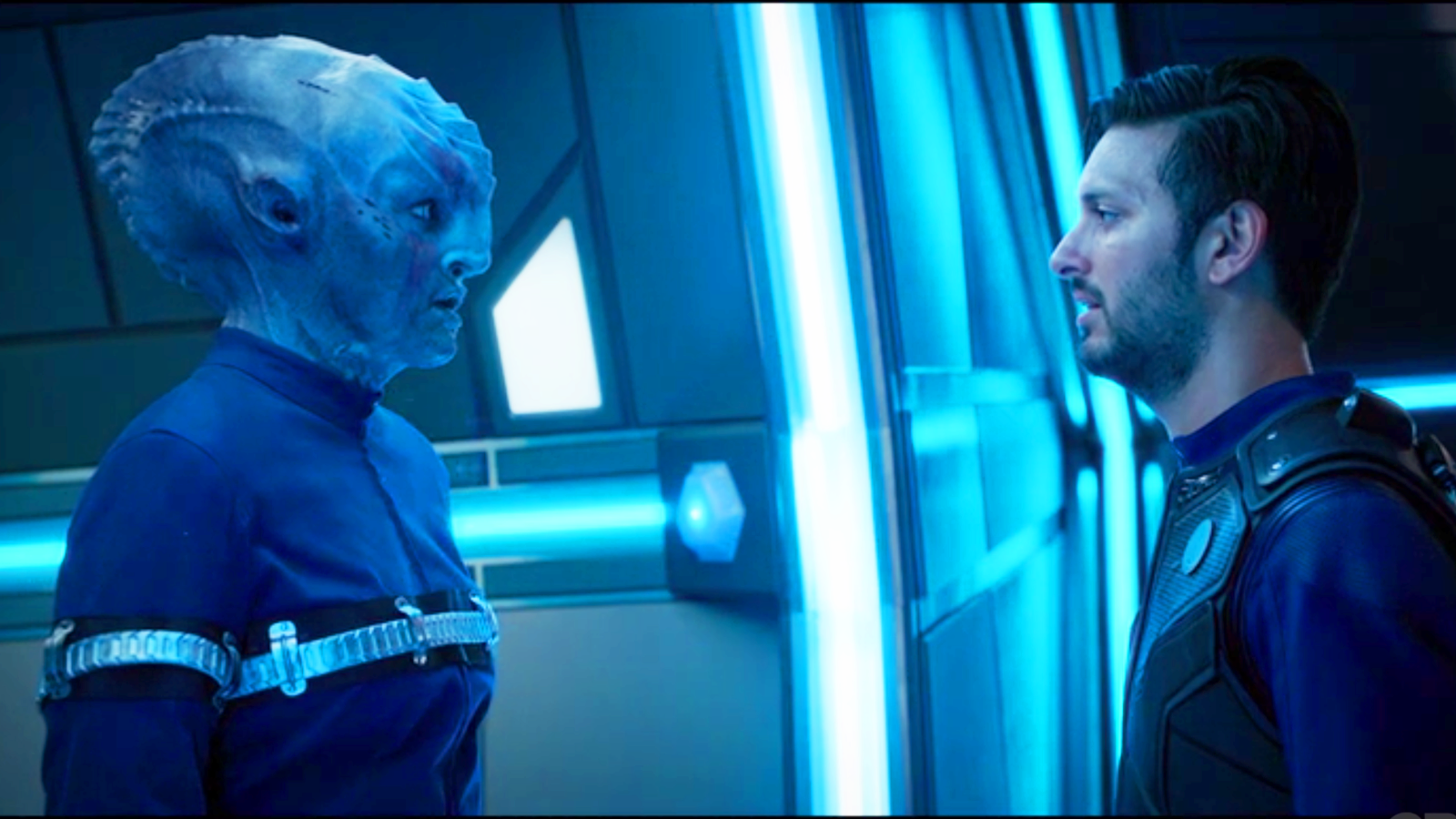 Star Trek: Discovery returns from its hiatus with “Despite Yourself,” an excellently named romp through the classic Trek Mirrorverse. Stamet’s navigational malfunction during their last jump has launched them all into, not just any quantum parallel universe, but the parallel universe full of fascist politics, human supremacist notions, and constant vicious backstabbing. While the previous half of the season featured interpersonal conflict through the context of war, this half has it much easier since the whole thing looks to be set in a world where killing one’s comrades is an everyday occurrence. How such a society could cooperate enough to achieve space flight is something I won’t even question. Nevertheless, here we are and it is just as wonderfully done as before.

It didn’t occur to me how topically perfect the Mirrorverse is for our current political climate. I was excited at the prospect of the Mirrorverse because I’m a giant dork and I love that kind of callback. This show is kind of the ultimate cross between fantastic fan fiction and excellently integrated fan service. I’m sure it makes sense if you’re not a devoted Trekkie because every episode is well written in its own right, but if you are a Trekkie it’s so laden with the Trek mythos and inter-series canonical references that it’s an absolute brain feast to watch. Star Trek’s utopian vision of the future threatens to come off as hopelessly quaint with the fascistic right-wing coalition that’s currently in power in the United States and the rise of nationalism all over the globe. I think that the Terran Empire of the Mirrorverse is an excellent way to comment on those impulses in humanity and it’s something that didn’t even occur to me until this very episode. I was excited that there might be things like an Evil!Tilly without really considering the implications of why the Mirrorverse was peopled with “evil” people. Michael’s observation that the strength of Terrans is a sham driven by fear is spot on and reveals the fragility of fascist agendas and psychopathic worldviews. Basically, it doesn’t pay to be a racist jerk because all you get is constant fear for your life. 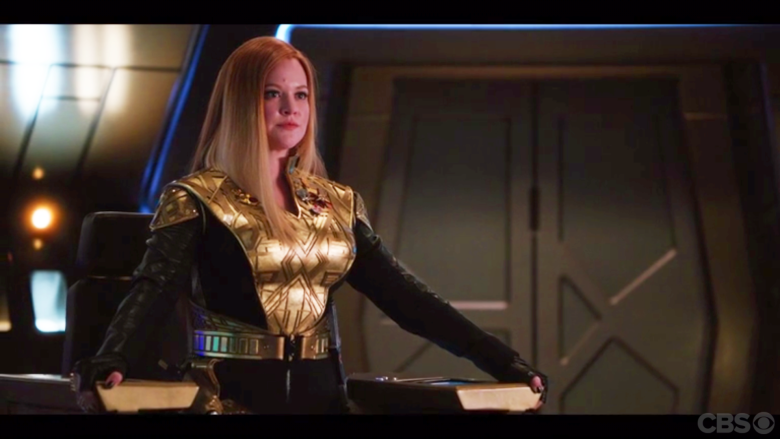 Now that I’m done being smart–oh my god, we got Evil!Tilly! But even better, it wasn’t Tilly’s actual Mirrorverse counterpart, but our sweet Tilly trying to play “Captain Killy.” In fact, all of our folks are pretending to be the evil versions of themselves which is genuinely delightful. It’s somewhat safe and cute on the Discovery itself (including Lorca’s choice of Scottish accent when pretending to be the chief engineer!), but when Michael, Lorca, and Tyler all infiltrate the Shenzhou things get quite serious very quickly. Tilly might be playing at ruthless captain on transmissions, but Michael has to do it at all times. Meanwhile, Lorca is locked in a torture chamber! At any rate, overall this is an excellent mixture of pre-existing canon and Discovery’s own narrative. We get the joy of watching the series play in an alternate universe that’s the polar opposite of Starfleet’s utopian future while we also get the joy of all the new elements brought in by Stamets spores and the show’s quantum physics. Even their idea for how to get back to their home universe stems from canon–it ties in to the Enterprise Mirrorverse episodes!

Speaking of Stamets, the poor man is completely fried and his husband, Culber, is refusing to relinquish control of the case. I liked the emphasis that Lorca put on everyone having to put their feelings second to their duty in this universe because it both acknowledges that emotions are important but simultaneously shows that Lorca understands that emotions can get people hurt in challenging situations. That’s doubly nice to see. He’s not telling people to not have emotions, just that they need to be particularly careful about their impulses because they’re all in such danger. Stamets is now the sort of loony prophet figure which I hope is temporary. That’s a bit too close to the classic trope of the scientist being driven mad by his own research. Additionally, holy moly did they kill Culber for real? Uncalled for, dudes! I mean, it narratively fits but why you gotta go and kill off half of the sweet, happy, canonical gay couple? I swore very loudly, and then swore at my friend 2000 miles away who watches this show with me. That was the biggest shocker in this episode and I’m still not sure how I feel about it. I’ll defer to the experts in LGBT representation on this one. 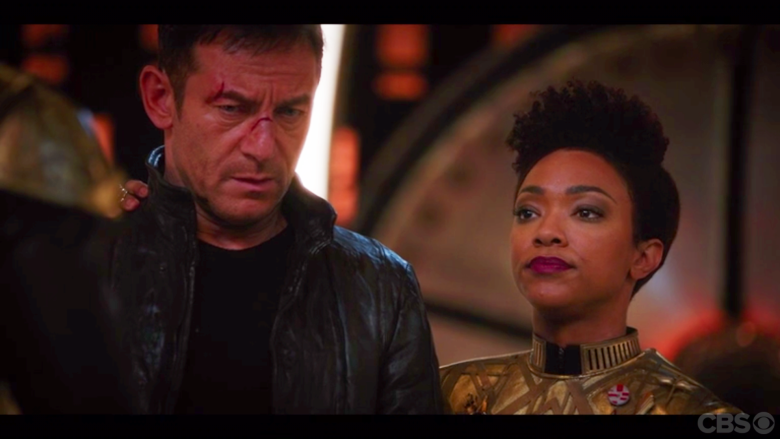 Speaking of my best friend, he has had a theory that Tyler is Voq since Tyler first showed up. I’ve hated his theory since he told it to me. The way this series has portrayed and dealt with Tyler’s captivity, sexual abuse, and PTSD is way too excellent to undermine it by Tyler being a sleeper agent and not who he says he it. It looks like my friend is turning out to be right but it’s more complicated than just Tyler being a baddy undercover. It seems that somehow the Klingons have modified Voq completely and turned his Klingon body into a human body. On top of that, the personality that they put “on top” of Voq (i.e. Tyler) seems to be fighting for supremacy with his programming. I would absolutely love if Tyler is just too honorable a person and wins out over Voq. I’m very weird about my identity crisis stories because they hit very close to home for me. It’s a thin line that they’ll need to walk to do well with this narrative but everything else about this show is so good that I have a lot of faith that they’ll do this justice. One more thing, semi adjacent: I love the way that Tyler and Michael acknowledged their feelings for each other. They didn’t say your typical scripted “I love you” nonsense; they expressed themselves to each other by declaring their devotion to the other’s safety. It’s my favorite thing when characters aren’t just thrust into cookie cutter romance narratives but actually get to express themselves in ways that are more natural for them. Tyler and Michael nail it.

You guys, I missed this show so much. I remembered that I loved it but I had forgotten just how much I loved it and why. Not only is every episode excellent in its own right, they’re all so full of geeky little references and canonical goodness that this entire series is a constant joy to watch. Now they all have to navigate their way through the treacherous Mirrorverse for a while until they can figure out a way to get back home. The fun part is, we get to watch.