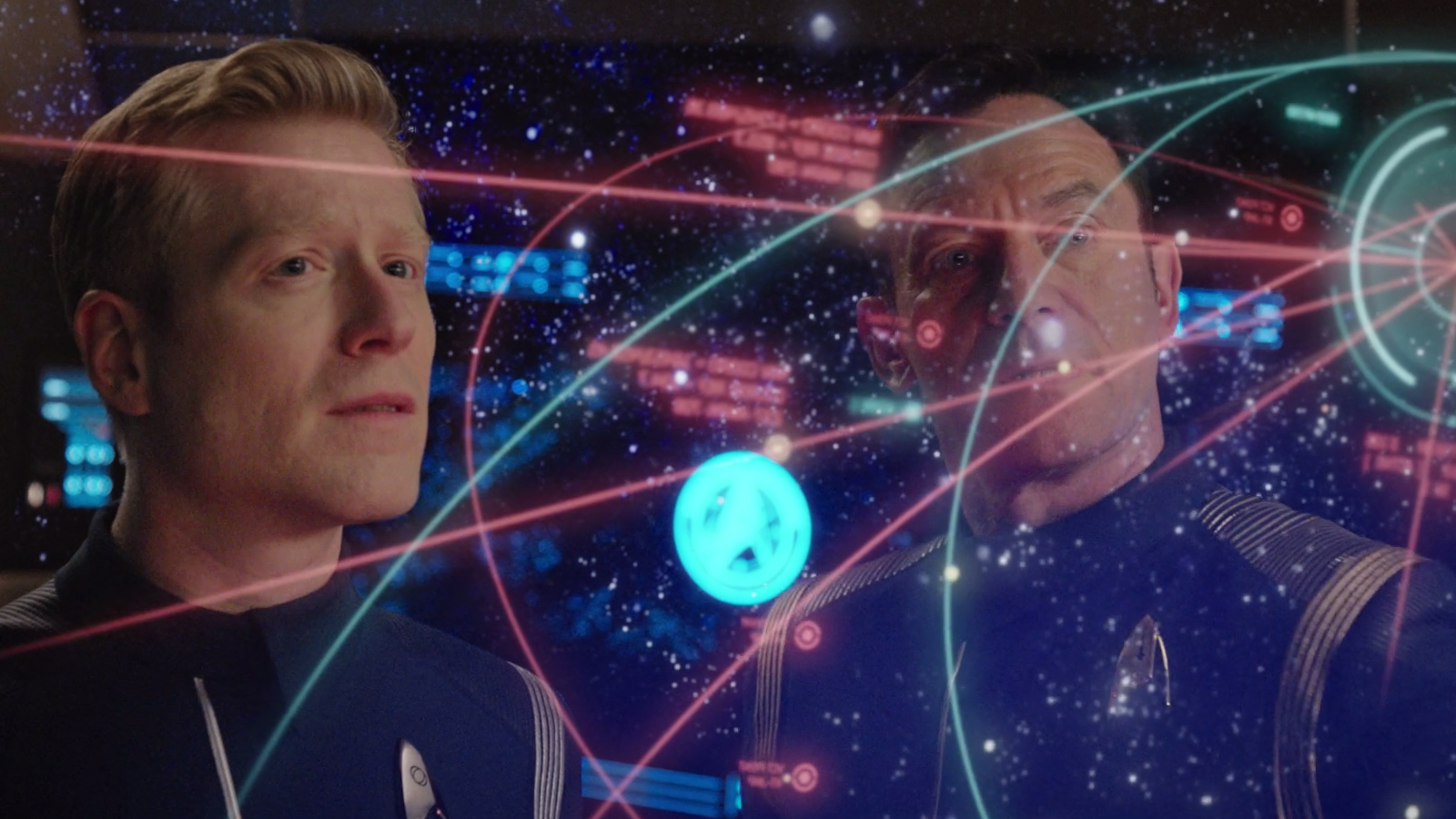 Star Trek: Discovery does well by both its plot and characters in “Into the Forest I Go,” providing climax and resolution in the major storyline while building on its dangling threads to lead into the next chapter of the series. The episode is beautifully structured, well-written, suspenseful, and action-packed while still leaving room for its characters to grow and process the things that have happened to them. There’s just enough closure that it feels satisfying yet immediately launches the crew into further peril.

The episode picks up in the same situation where the previous one left us. The Discovery is the only thing between the peaceful planet Pahvo and Klingon annihilation. Lorca tries to convince Starfleet high command that they need to stay and fight but they’re ordered to retreat. Lorca manages to buy them three hours of time to figure out how to save Pahvo and defeat the Klingon’s cloaking technology. That’s just the initial problem—the complexity of the situation compounds as they end up with three or four variables in their plan. Stamets is in seriously bad shape from all the jumps and Lorca asks him to do 133 in quick succession. Tyler and Michael need to beam onto the Klingon ship and place sensors that report telemetry data back to Saru and the bridge crew who then need to both analyze the numbers and keep attacking the Klingons. It’s a complicated plotline but it’s beautiful in its logic and execution. It also sets up an excellent, suspenseful, brilliantly written and edited battle scene between Discovery and the Klingon Ship of the Dead. Tyler has to deal with his PTSD, Michael engages in one-on-one combat with the Klingon general, Stamets is literally being driven out of his mind from all the jumps, and Lorca is orchestrating the entire thing with some kind of ulterior motive. The different character arcs are superbly woven together to show us four sides of one unbelievably cool battle. Come on—it’s got a teleporting starship, a cloaked warship, hand-to-hand combat, space magic, and mid-leap transportations out of perilous situations. It’s a giant nerdfest. 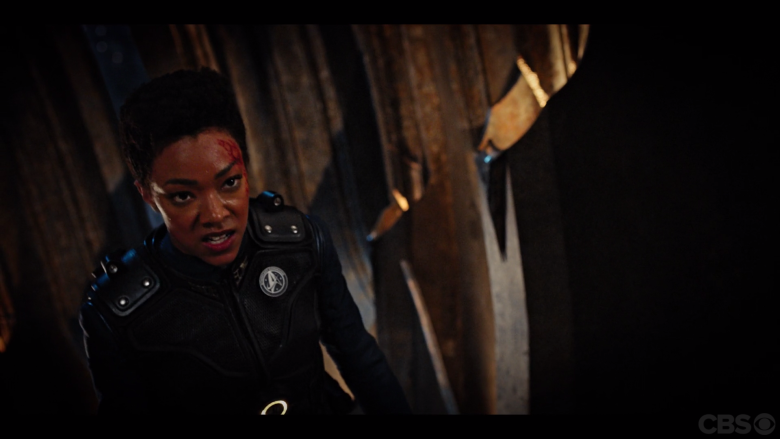 What really makes this such an exemplary mid-season finale is that it first provides a satisfactory climax of the main Klingon War plot—at least for the crew of Discovery—and then, in wrapping up loose threads and providing closure on a few points it leads into even more danger and sets up the second arc of the season. Mid-season “finales” are an odd conceit that’s a fairly recent innovation. Serialized storytelling runs into issues when networks take long broadcasting breaks over the winter holidays so you get narrative structures that need to be broken down into chunks. I feel like a successful mid-season finale is truly a work of great skill. Discovery gets it exactly right. The level of tension is justified as the entire first half of the season led up to the big battle between Discovery and the Klingon Ship of the Dead. The resolution of various storylines is a nice breather before even more things screw up and send us into a new (but highly interrelated) story when the series comes back after break. Clearly, our pals are now stuck in the Mirrorverse (as hinted at in an earlier episode with Stamets), something is seriously wrong with Tyler (who also has to deal with his abuser being a captive on their ship), Lorca has a weird obsession with Michael that I am dying to know more about, and Stamets is becoming one with the universe in the most disturbing way. I love it all. 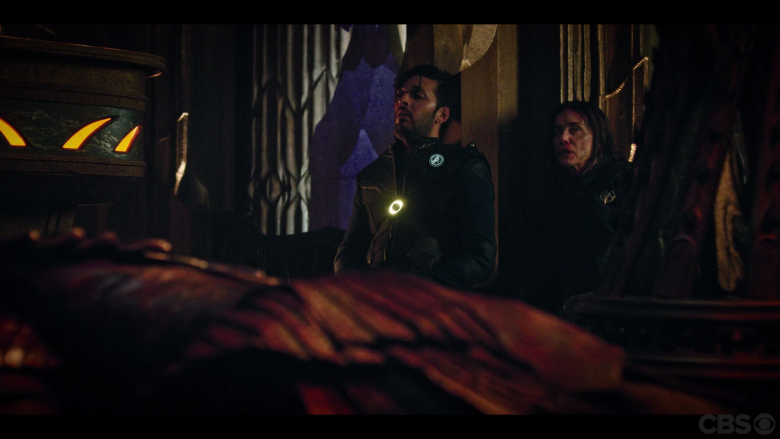 What I appreciate most about this episode is the way it handles trauma and PTSD. Ash Tyler was held captive, tortured, and sexually abused by L’Rell during his time as a prisoner of war on the Klingon ship. When Michael and Tyler seek the human life signs that they find on the ship they discover Admiral Cornwell and also L’Rell. Tyler sees L’Rell and freezes, trapped in traumatic flashbacks. First of all, no one blames or shames Tyler for his breakdown. Michael takes the mission on herself and gets the job done. Cornwell, who made admiral coming through the ranks as a psychiatric professional, is instrumental in calming Tyler down and helping him save the two of them. Once they’re free, Tyler and Michael discuss what happened to him while he was a prisoner and he doesn’t feel shame or blame himself for his decisions or their consequences. Instead, he is actively working through his trauma and accepts that the choices he has made were horrific but they allowed him to survive. It’s not that he is responsible for what happened to him but that he had two choices: acquiesce to being treated horrifically or die. Forgiving oneself for the abuse that you’ve endured is one of the hardest things to do, and yet Tyler is aware enough to already be at that point. I’m a bit troubled by the sleeper agent aspects of his storyline but so far this show is so self-aware that I trust they won’t screw up one of the most compassionate representations of trauma fallout that I’ve ever seen. Time will tell.

There’s only one mid-season finale I’ve ever seen that’s better than this and that was in my favorite season of my favorite show. In just nine short episodes, Star Trek: Discovery has cemented its place both in my heart and very near the top of my personal list of favorites. As a lifelong Trekkie, I don’t say that lightly. It’s a series that’s respectful of its roots, aware of its political context, and well written by any standards but especially by the genre conventions of science fiction. I’m in love.