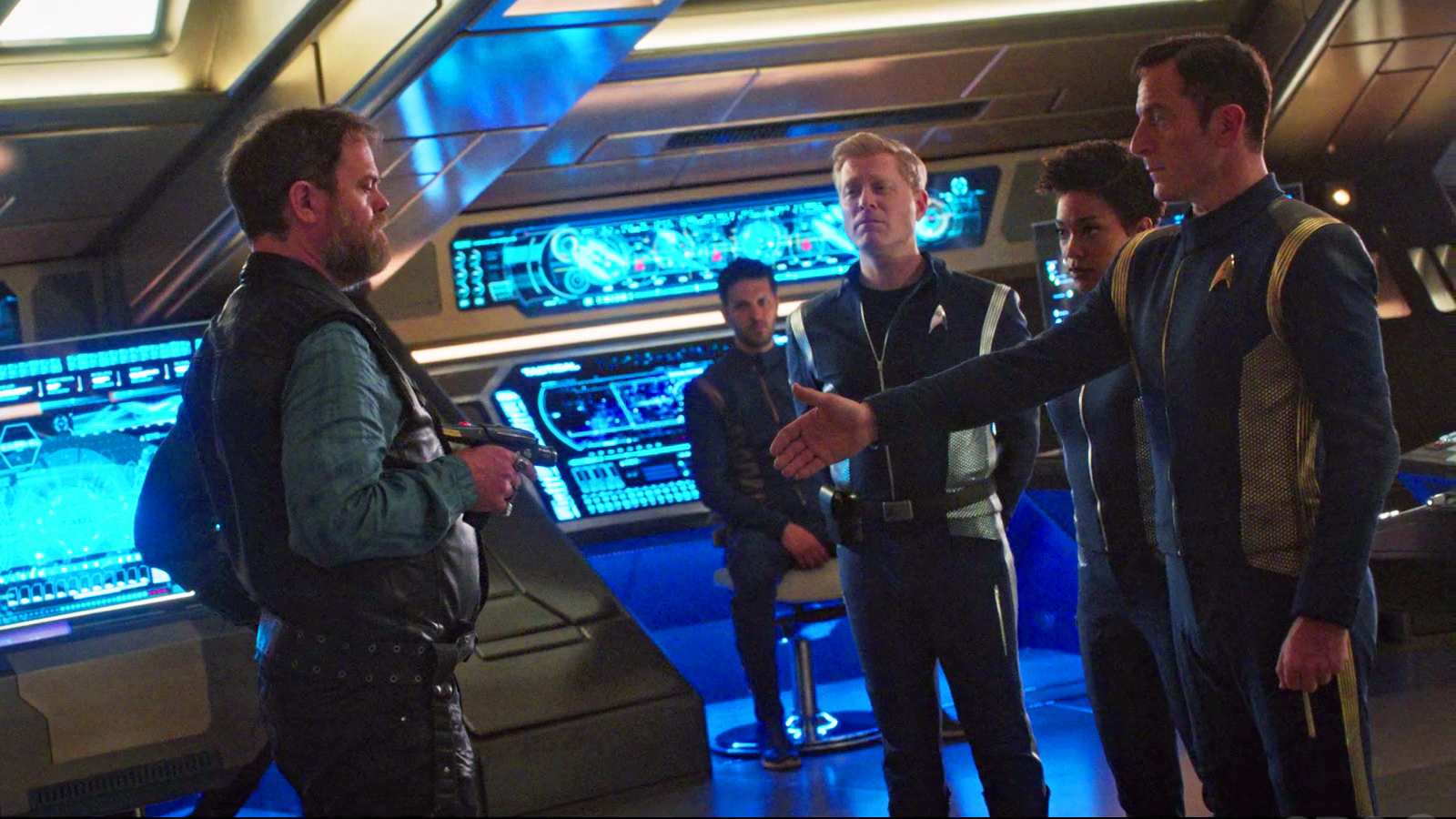 Sometimes, a show just gets you. And it doesnít just get you, it fully understands everything that itís doing, all of the material that it has to work with, and knows itself so well that it very clearly declares what it wants to say. Star Trek: Discovery is like that for me. ìMagic to Make the Sanest Man Go Madî is an excellent example of science fiction, Star Trek, time loops, narrative structure, positive storytellingóI mean everything this episode is trying to do it absolutely nails. I am so impressed!

My old Groundhog Day tradition was marathoning every time loop television episode that I could get my hands on. Time loops are their own tidy subgenre that will inevitably surface in every sci-fi or fantasy show with even the slightest bent physics. Because of that, time loops are done to death. This episode was savvy of the worst cliches, loyal to often bizarre Trekian physics, and also was fresh enough in itís approach to the loop narrative that it showed off the characters and the storytelling rather than bogging down as filler. This was in the style of a classic case of the week with the main problem isolated to one episode, yet the problem and the solution stemmed from events in the serialized storyline. It was a beautiful way to marry together the old episodic style and the current narrative. 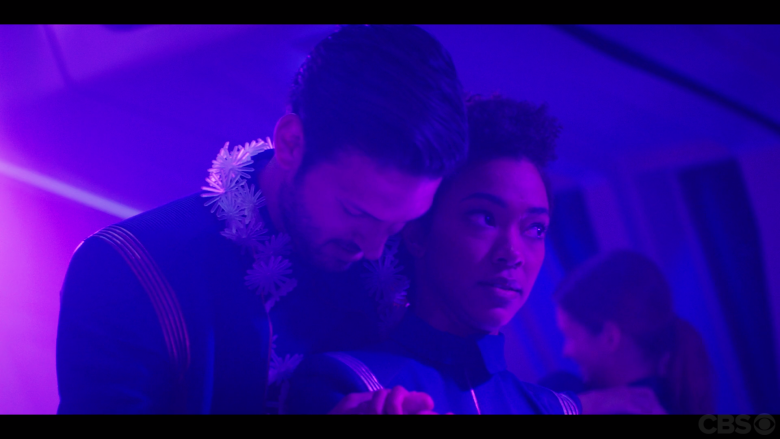 Stamets steals this episode because he is the only one who can remember the loop. I thought it was a nice touch to keep the focus on Michael even while Stamets is clearly experiencing the whole story. We get to figure out whatís going on along with her which adds to the tension rather than just relying on explosions for all the drama. After Stamets injected himself with the tardigrade DNA he went from uptight to kooky. My favorite part of his personality change is how gentle and caring he is now that heís connected to the universe. Stamets can remember the loops because the tardigrade DNA allows him to exist in multidimensional space outside of the loops which is an excellent, plausible explanation. He tries to save the ship on his own and then turns to Michael for help figuring out how to stop Harry Muddóthe key to that decision being that she and Ash Tyler have mutual feelings for each other which Stamets understands instantly. Stamets even eventually gives himself up to Mudd to keep his friends from being killed again which further illustrates his big heart.

I canít say that I have a favorite part of this episode because the entire thing is essentially perfect. However, one of my favorite things is that the solution to this weekís problem hinges on the interpersonal relationships between crew members. Stamets has a good relationship with Michael so thereís no friction from her while he tries to get her to believe him. She trusts him enough to tell him her secret and heís so genuinely kind that he tells her that heís sorry sheís never been in love. Michael is only just learning how to deal with her emotions and sheís been through an enormous trauma as well, so I adore that sheís terrible at dealing with her feelings. Sheís blunt, has no idea how to flirt or make small talk, and is afraid to screw up her friendship with Tyler. I have an overidentification problem when it comes to female characters who are bad in social situations and donít understand romance so Michael and Tyler get me where I live. While brains definitely helped save the day in this situation, what really did it was the trust and love between the crew members. You donít see emotion being held up as important very often but you barely ever see emotion and intelligence given equal weight in a narrative. I love it. 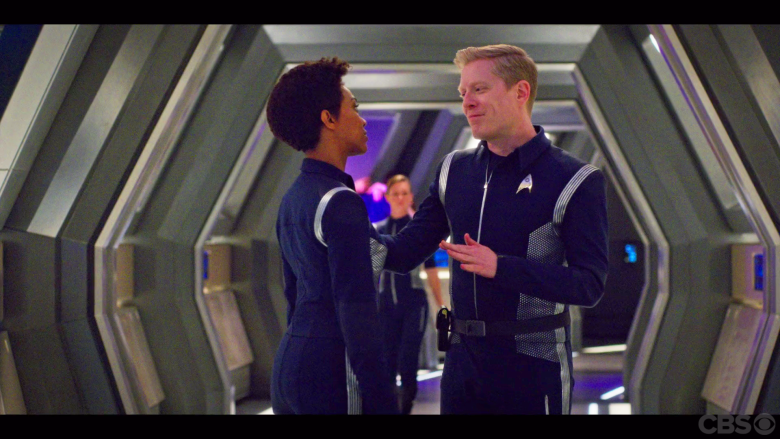 The extra bit of fun was that Harry Mudd is the villain terrorizing the Discovery because of his grudge against Captain Lorca. Lorca and Tyler left Mudd in a Klingon torture prison in Tylerís first episode which provides excellent continuity with the story at large even while the time loop creates a bubble around this episode. Tyler remembers Mudd bragging about his technological tricks while locked up, all of which are suitably black market and low-tech enough that they tie into larger canon but believably fit in this time period. Mudd spends his loops figuring out Discoveryís secrets and killing Lorca as many times as possible because Mudd is a petty, vindictive man. His original incarnation is a slightly lighter shade of morally gray, but I like him being so ruthless in this. This episode even managed to give pathos to Muddís harpy wife, Stella. Mudd originated in The Original Series and, as such, constantly talked in a demeaning, misogynistic manner about his nagging wife who he ran across the galaxy to escape from. Mudd captures (or, in this context, I suppose Mudd will capture) the Enterprise crew and keeps them on a planet with a robot population that he controls. Kirk and company get the last laugh by taking the sexist robot double of his wife and making multiple copies he canít control, then leave him stranded with them on the planet. Itís classic ë60s chauvinism thatís not okay but is explained by the cultural context. This episode shows that Mudd is a jerk who stole Stellaís dowry and that she was actually in love with him and wanted to be with him. Injecting some empathy into Stella is a beautiful retcon of the nastier patriarchal spirit of TOS.

Itís impossible for me to choose a favorite character in this series because every time I do I stop short like ìno, wait, what about so-and-so!î Tilly, Stamets, Lorca, Michael, Ash, Saruóbasically all of them are excellent in their own ways and itís nigh impossible to pit them against each other in a contest for my affection. This Trek is the closest the franchise has ever come to its true egalitarian ethos, featuring a cast of characters thatís extremely diverse in race, gender, sexual orientation, and species without anyoneís physical characteristics even being noteworthy. The respect for canon is great, the writing is wonderful, and the whole story is fantastic. I love being on this journey with these folks every week and Iím perilously close to just handing my heart over to them completely. Theyíve developed that much trust with me, and I donít trust easily.