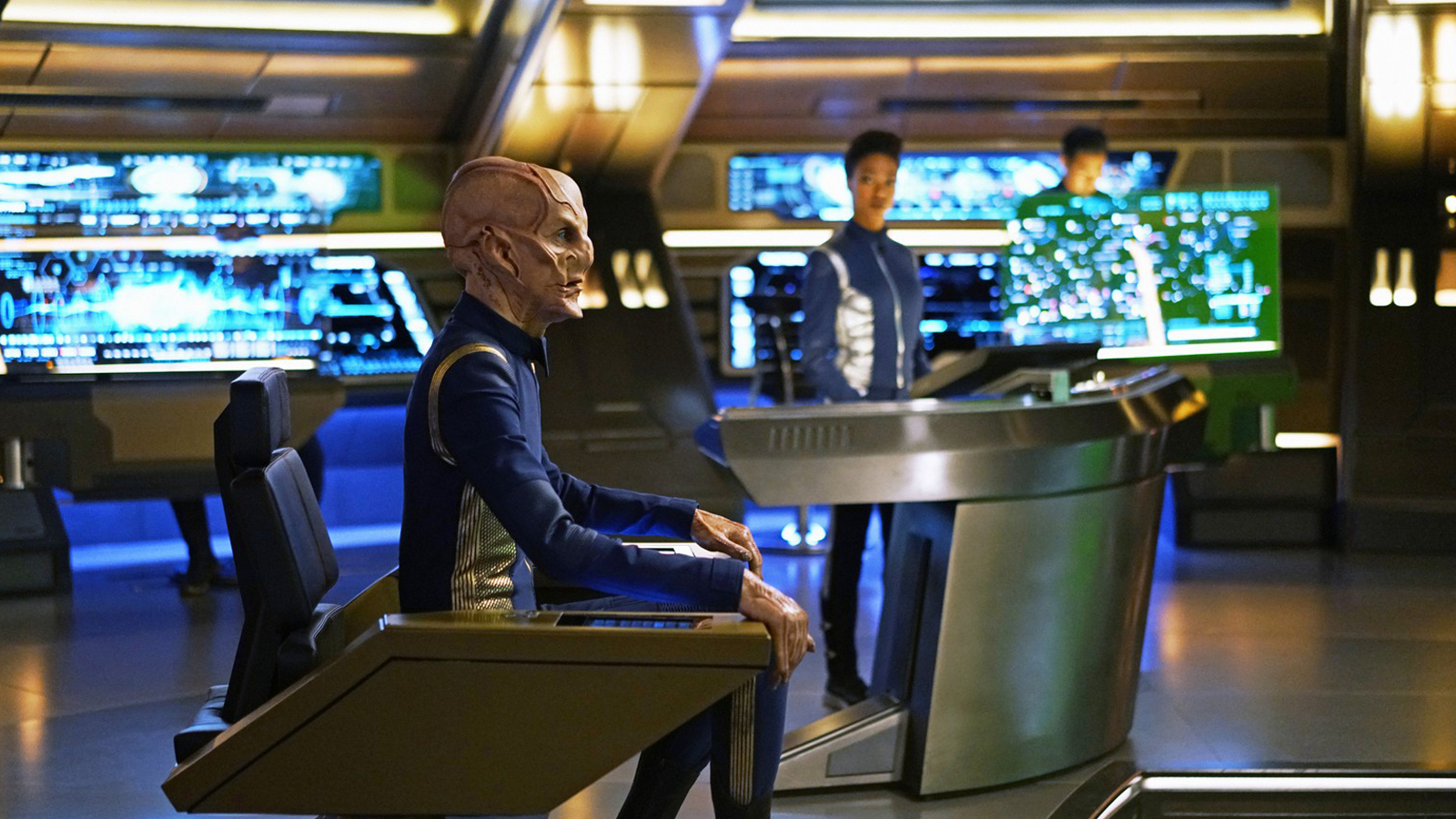 Star Trek: Discovery’s penultimate episode, “The War Without, The War Within,” is a hefty chunk of exposition interspersed with moments of character growth. Interestingly, there’s not really much war action to speak of, but there is plenty of setup to contextualize Starfleet’s desperation and the wild decisions that many of the characters make.

Stamets has a starring role in the logistical side of things as it’s down to him to first, replenish their spore stores, and second to jump Discovery literally inside the Klingon homeworld Qo’Nos. Considering the amount of physics involved in that particular maneuver I am genuinely impressed that they pulled such a crazy plan out of thin air. For a while, I also thought that the fact that they used all their spore stores to get them out of the Mirror Universe and back to their own was going to be the reason why spore drives aren’t in general use in the Federation after this. Since they terraformed an entire moon with the spores, that’s not really a plausible explanation anymore. I’m still waiting on that one but, given the way they’ve treated canon to date, I’m sure we’ll be told eventually. 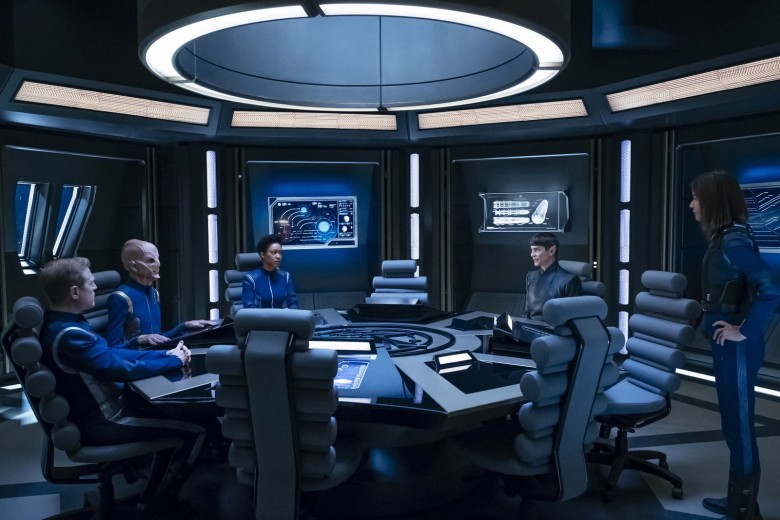 A lot of the business of this episode has to do with Ash Tyler not just figuring out who he is but doing so through the way that the other members of the crew treat him. Saru starts off the parade of gentle understanding by refusing to take Ash’s freedom even though Ash himself insists that he should be locked up. Tilly, in particular, is my favorite in this whole situation because she’s the first to accept him in front of others and she’s the one who spells out to Michael that our environments are what shape who we become. I still can’t pick a favorite out of this cast but Tilly is definitely top of the heap every time she’s on screen. Ash’s apology to Stamets for killing Culber was also quite well written as it was clear that they both understood words weren’t enough but that the gesture was appreciated. Stamets doesn’t forgive him because his actions are unforgivable, but he holds no grudges. Ash, for his part, is so torn up about what he did that it’s obvious he’s his own sweet self again and is having to confront the horrible things that he did while a sleeper agent. Related sidenote: I genuinely love that the main Klingon we’ve followed throughout this series is a woman. We’ve seen Klingon women before in other series but they’re like afterthoughts that just seem to exist because the species needs them to reproduce. L’Rell is a warrior and a spy and clearly one of the best in both regards and I love her for it.

Ash’s confrontation with Michael is also a thing of beauty. Michael has a hard time expressing emotion in the first place so she tries to rationalize her feelings into something she can use to write off Ash’s need. Instead, Ash out and out confronts her and calls her out on exactly what’s going on in her head and all of the conflicting emotions that she’s feeling. It’s sad but also nice that Michael doesn’t just give in to Ash’s desires and leap back into his arms. Her realistic emotions and her boundaries regarding the situation are respected by every character–even Tilly when she has to confront Michael about saying what she needs to say to Ash “even if it’s goodbye.” Michael explains to Ash that finding yourself again after trauma is something that you need to do on your own which is true. You need a support system, but you also can’t wrap your identity up in one person because it’s not fair to them to be forced to support you in isolation. I like that this show is aware enough to realize that and to keep the two of them separated not exclusively for relationship drama (which it is, naturally) but for the mental and emotional health of the characters themselves. A+ job on that front. 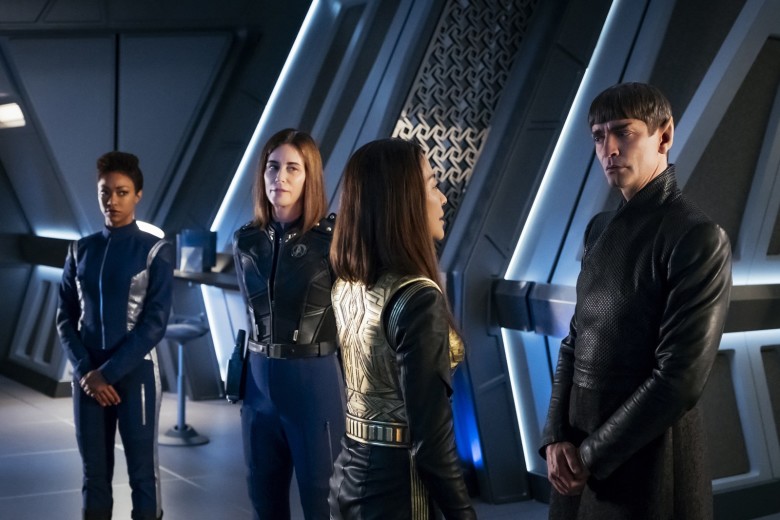 Of course, the big twist is that Emperor Georgiou is now playing the role of Captain Georgiou! We don’t know what she traded with the Vulcans and the Federation to get that kind of freedom, but it’s an excellent ploy given that only Saru, Cornwell, Sarek, and Michael know that she’s not the real Georgiou. I like how she instantly connects with Sarek over their shared history raising Michael(s) and that Sarek, in turn, understands her motives and manipulations because, well, he’s a Vulcan and it would be easy for him to catch on to the way a Terran thinks. My friend Marc (whose theories tend to be correct) seems to believe they’re going to unleash a bunch of tribbles upon Qo’Nos. I might die laughing if they did because when I was a kid the last episode of TOS I remembered was “The Trouble With Tribbles” and I was convinced that tribbles just reproduced to the point that they consumed the universe and ended all life. Anyway, I’m thrilled to see how the literal Terran Emperor manages to pretend she’s one of the most ethical members of Starfleet in the organization’s history. I also love that Cornwell is the field admiral here as it lets her demonstrate her competence and expertise in a battle situation which I think is particularly noteworthy since she came up through Starfleet as a therapist (another detail I love about her.)

Honestly, this is like the calm before the storm. It’s much slower paced and less involved than most episodes of this show but it leaves so much room for character development and for everyone to process what’s happened to them that I can’t really complain. Considering the season finale is shaping up to be an insane mission to the Klingon homeworld then, yeah, a little breather is nice and the narrative still moved forward even if the war itself was on the back burner.