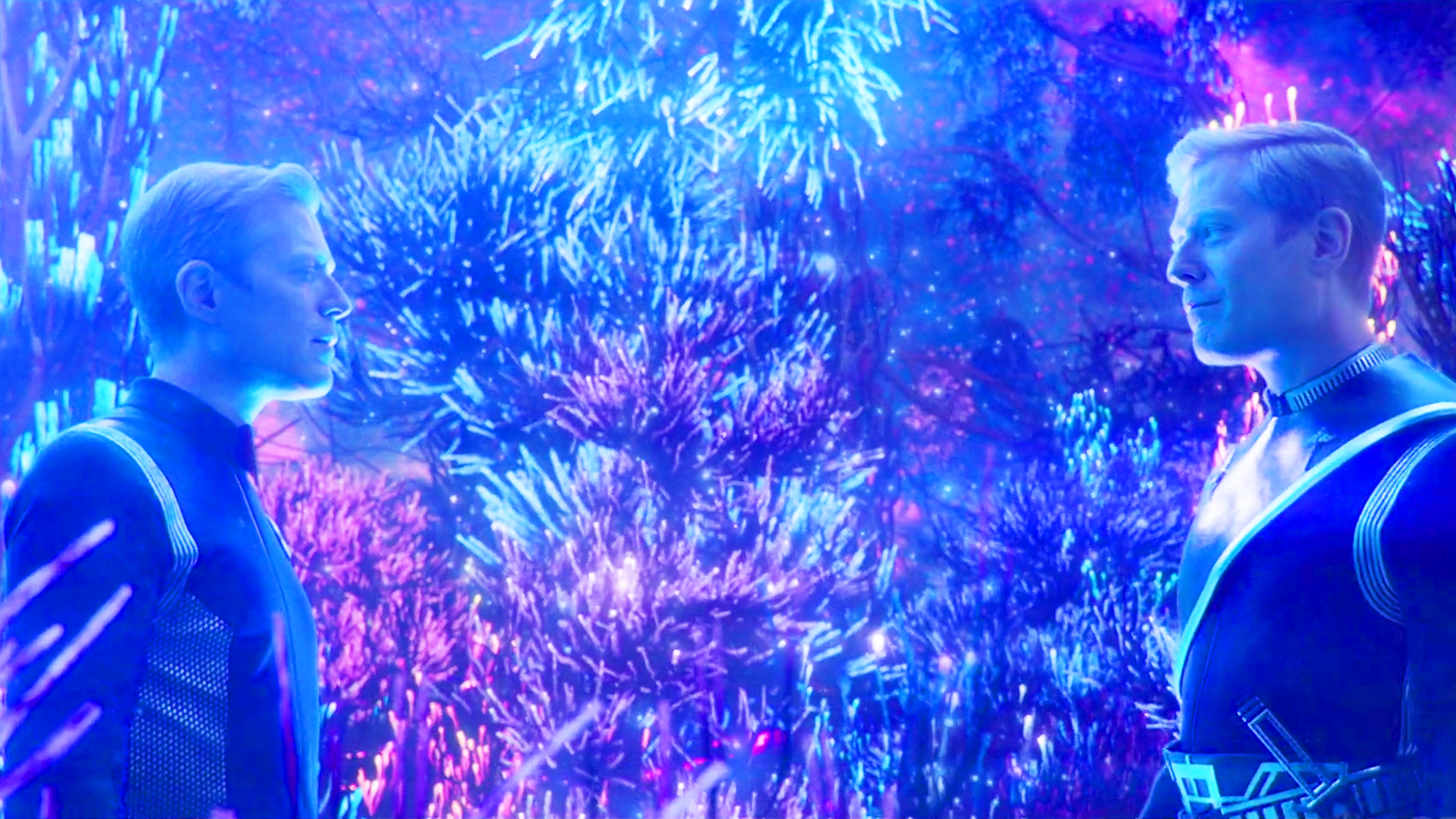 It is so nice to see Star Trek: Discovery back on its game. Last week’s episode wasn’t terrible but it had some problematic elements that I did not like and was more basic in its representation than this show usually is. “Vaulting Ambition” corrects a lot of the issues that I had, addresses the others, and throws in some nice twists to make one very solid, scandalously short episodes.

First, I want to talk about Ash. L’Rell explained more fully what they did to him and I’m all about the explanation. The implication last week was that they had transformed Voq into a fake human persona known as Ash Tyler. This week they made it clear that they took a real-human-Ash, cleaned out his insides, and fused his mind with that of Voq. Ash really is in there, he really is kind and loyal, and he really is a survivor of massive trauma. I think the thing that’s most Voq about him is that he had Voq’s brainwaves crowding out his own. It seems like L’Rell erased that from his mind, setting him back to just Ash Tyler though that remains to be seen. What I love most about it is that Ash is allowed bodily autonomy and he’s a real person that they can help rather than just a Klingon sleeper agent without any true personality of his own. That pleases me immensely as I adore the Ash Tyler that we’ve come to know and now that he knows what truly happened to him it will be easier for him to work effectively on his trauma. I also love that the sweet character we were introduced to is real and not a fabrication. It shows that kindness can be true and that it’s not just a manipulative facade as last week’s developments suggested. 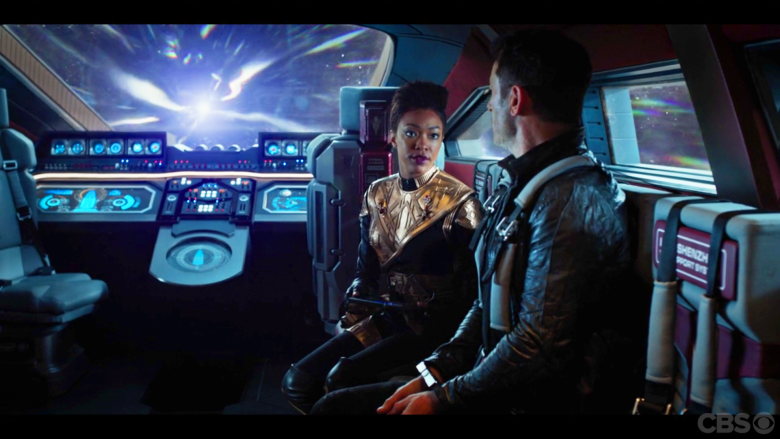 I can’t actually pick a favorite character in this show, but every time Stamets is on screen I shout “I LOVE YOU” at my TV so he’s definitely at the top of my list. (To be fair, I do that with a lot of the characters.) Stamets is running around in his own mind with his Mirrorverse copy of himself and through their discussions it becomes clear how and why the Discovery ended up in the Mirrorverse in the first place. Evil Stamets is also an astromycologist but he’s unscrupulous and uses science for his own personal gain. One of my favorite story tropes is the mad scientist and bad Stamets fits the criteria for mad scientist to a T. By contrast, our Stamets is like my platonic ideal of a scientist–he’s in it for knowledge, wonder, and to help every inhabitant of the universe if he can. Evil Stamets has somehow infected the whole mycelial network with some kind of disease that is threatening to literally destroy the multiverse. I love it because evil Stamets got himself stuck in the network and reached out to good Stamets for help but then basically just used him to get himself out. It explains why Stamets was seeing weird visions, how they ended up in the Mirrorverse specifically, and what they might be doing there. Of course bad Stamets would have no problem putting an entire ship in danger for his own gain, and of course good Stamets loves the mycelium and life so much that he’d get the two of them out of it even knowing bad things were probably about to go down. I just really love Stamets, okay? Sweet, driven, brilliant researchers are my ultimate character type. Also, please tell me they work some kind of magic to bring Culber back to life. That’s gotta be a thing.

Of course, one of the most fun things about this episode is Mirrorverse Georgiou. She’s just as fierce and loyal as the Georgiou we met so briefly, but she’s also cruel, calculating, and unforgiving. She’s the one who raised Michael in this universe, not Sarek, and their parallel relationships in both universes are both sweet and kind of crazy. It’s both a comfort and a curse that the same people are drawn together even in different worlds. My favorite thing, however, is that she knows all about the United Federation of Planets, immediately believes Michael’s story, and is completely willing to go along with whatever she needs to get back to her own universe. I also liked how she banked on the integrity of Michael’s Georgiou to gain Michael’s trust. The Mirrorverse seems like everything is completely opposite from the Federation, but really the characters all have similar traits they’re just twisted into the service of grotesque injustice and self-interest rather than altruism. It’s not the people who are inverted, it’s the society. 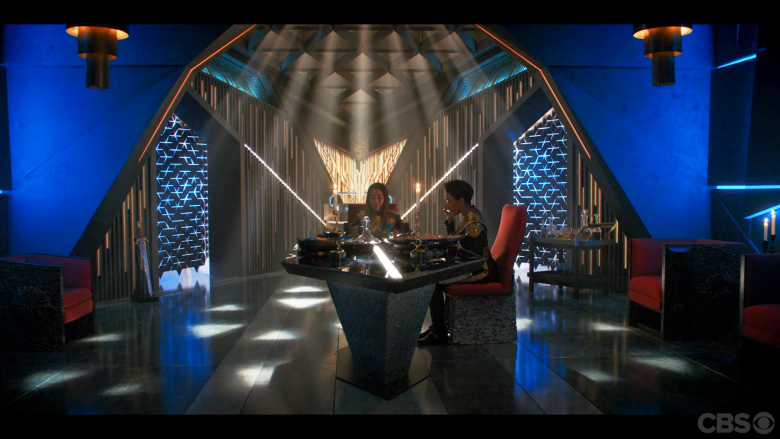 Y’all, my friend Marc–who called that Ash was Voq the very day that Ash showed up–has been telling me about his theory that Lorca was the Mirrorverse version of himself for weeks. I have immense respect for people who can theorize like that but I tend to just let shows take me along for the ride. I think it’s more fun that way. Usually if someone guesses a plot twist beforehand I get upset because it feels like a spoiler but in this case, Lorca’s reveal was just as dramatic as it would have been were I not expecting it and I was amazed that my friend had figured this stuff out ahead of time. I actually really love that Lorca is a Mirrorverse version of himself. His creepy relationship with Michael in his own universe explains his affection for and connection to our Michael even while it casts it in a much more complex light. Lorca’s ambiguity and gray morality fits perfectly with the Mirrorverse so it all makes sense but he’s also not so evil that one would suspect he’s a genocidal maniac. He’s gray in both worlds, and I like that they leave it uncertain whether he’s trying to stage a coup to install himself as Emperor or if his rebellion is in the service of some more noble ideal.

I love this show so much. It’s always smart, fun, and respectful. Each episode is well-written but this one packed and insane amount of intrigue and plot development into a space of time that’s about five minutes shorter than usual. When it ended, I screamed because I wasn’t prepared. I had extreme reservations about this series since they announced it but I’m almost ashamed to say that I think it’s my favorite Trek, and I’ve been a Trekkie for as long as I can actively remember. It’s just continuously excellent and this episode is no exception.