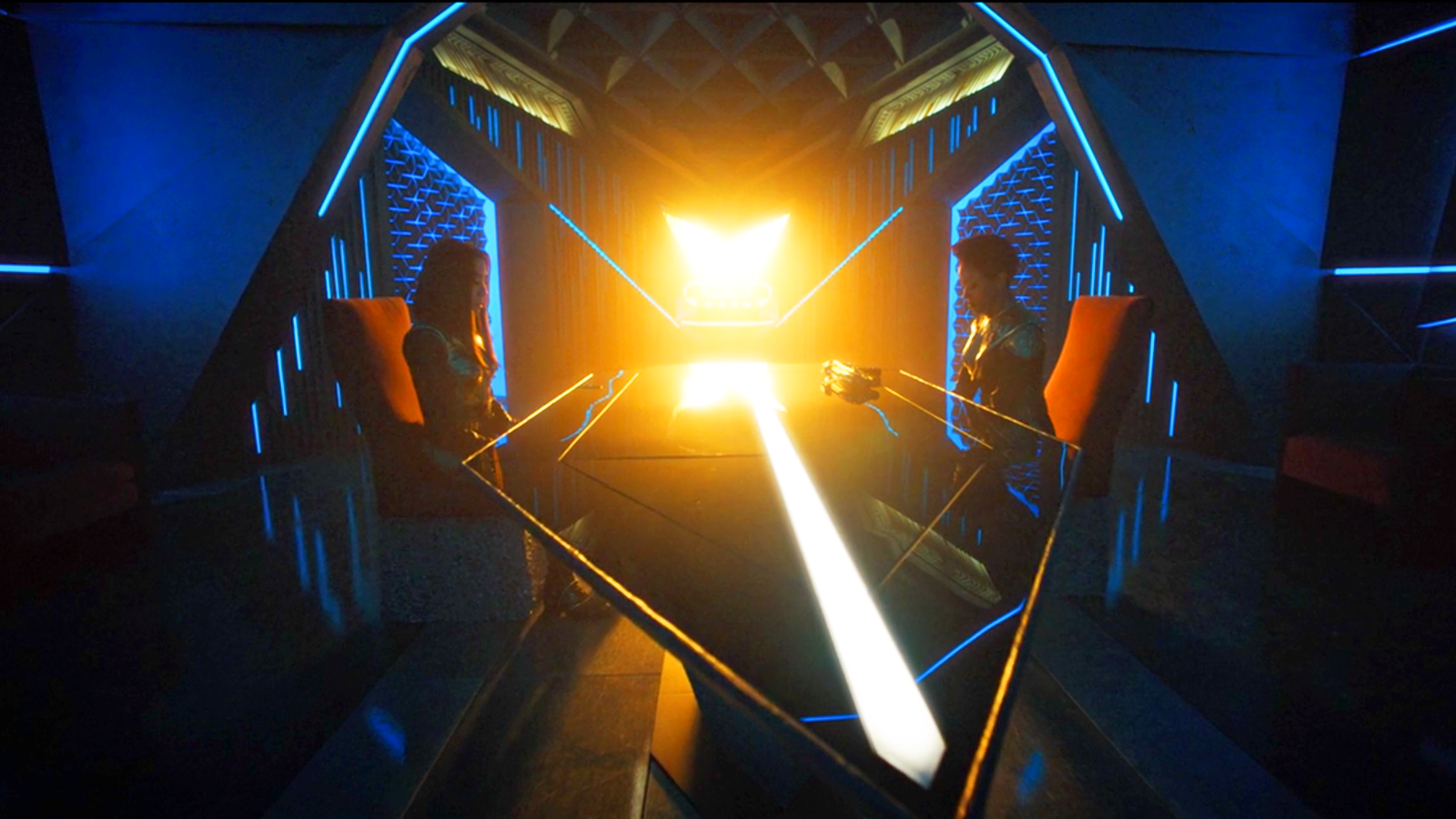 Star Trek: Discovery continues to be as excellent as ever with “What’s Past is Prologue”–essentially the climax episode of the Mirrorverse chapter of this show. As such it’s non-stop action and high stakes from start to finish. It’s well-executed, ties up the alternate universe plot threads well, and sets up

I love how all of the Mirrorverse episodes have made a point of using Terran culture as a counterpoint to the egalitarian ideals still in full force on the Discovery. They show the fragility of patriarchal, toxic ideals of power that are specifically on the rise in the world right now and I like that Discovery is keeping up the tradition of pointed political commentary. This episode particularly had some things to say about depleting natural resources for individual gain without thought to what harm it’s doing to others or how sustainable the technology is. Sucking energy out of the mycellial network is the space equivalent of climate change, considering that if the network is what makes all life in all universe possible. I also loved Saru stepping up as the real captain of the Discovery. His inspirational speech was one of the best I’ve ever seen, and when he claimed Discovery from Lorca he specifically said that it was all of theirs. As ever, most of the Disco crew’s business involves figuring out the scientific reason that things are happening and how to get them fixed. Since fictional scientists are my main jam, I guess this show is kind of cheating when it comes to snagging my affection, but all of the sci-fi science is excellent and they’re very careful with their details. 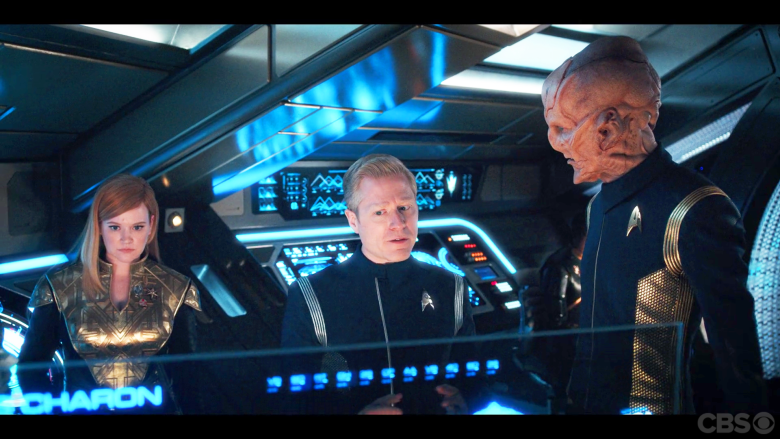 I am sad to see Lorca go because Jason Isaacs is amazing in this role and I liked never knowing what he had up his sleeve. That said, his demise was perfect, tied up a ton of story points, and (sort of) helped launch the Discovery back into its own universe. I know I’ve spent like three weeks griping about how annoyed I was that Ash was a sleeper agent and therefore not at all trustworthy. You’d think I’d be just as annoyed with Lorca’s turn, however Ash was presented as a character who was purely morally upstanding. Lorca was always an uncertainty and he’s just too much fun once his turn is revealed and he gets to go all out. I also like that his affection/obsession with Michael is still intact which adds an extra dimension to his hostile takeover plans. Rather than just purely seeking power he seems to be trying to reclaim a relationship that he once had with the Mirrorverse Michael. It’s extremely creepy but the show acknowledges that it’s creepy and I like how it leaves depth in Lorca’s character rather than just flattening him into a boring baddy. 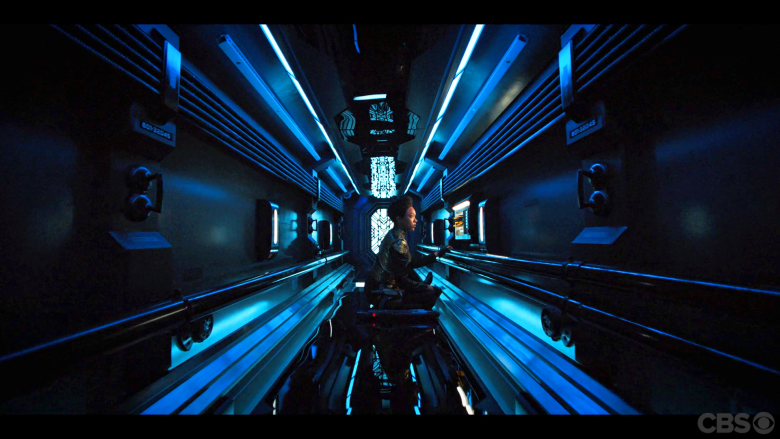 Georgiou is my favorite, favorite part of this episode. She’s the Terran Emperor and yet she has so much integrity that she helps Michael without any ulterior motive. The Mirrorverse culture thrives on betrayal, backstabbing, and ultraviolence and Lorca plays right into that. He lies and manipulates to get what he wants. Georgiou, it seems, rules because of her iron fisted control over the Terrans not because she connives her way through alliances. The action scenes in this episode, especially with Georgiou, are amazing and this show takes complete advantage of the fact that they’ve got Michelle Yeoh to work with. It makes me so happy that Discovery very consciously knows who they have in their cast. What’s even better is that Michael not only got to save this other Georgiou but she couldn’t stand to let her die and drags her back to the real universe with them. We get Georgiou forever now! And big bad Georgiou at that! My friend Marc wants her to head up a canonical Federation spy agency because she’d be capable of doing things that, ethically, the Federation can’t do.

I’m so enamored with the writing on this show I rarely pause to give the aesthetics any props, but there are so many gratuitously artistic shots in this episode that it’s impossible not to note. I feel like the director framed as many shots as possible as if they were pieces in an intergalactic art exhibit. The narrative scenes are filled with dynamic camera movement that keeps the momentum high even in the science-y scenes. This entire episode is just beautiful in every respect. 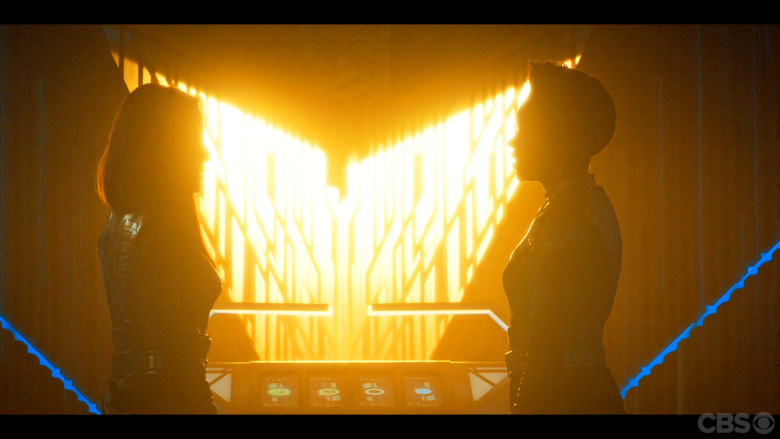 “What’s Past is Prologue” wrapped up one storyline and then immediately plunged us back into the middle of the Klingon War. I appreciate that an episode that was purely narrative climax isn’t going to let the show take it’s foot off the gas even after it’s gotten rid of its captain and saved the ship and the multiverse from terrible peril. That’s a great seasonal structure which I mightily appreciate. There’s only two more episodes to go and I’ll probably cry when this season ends.