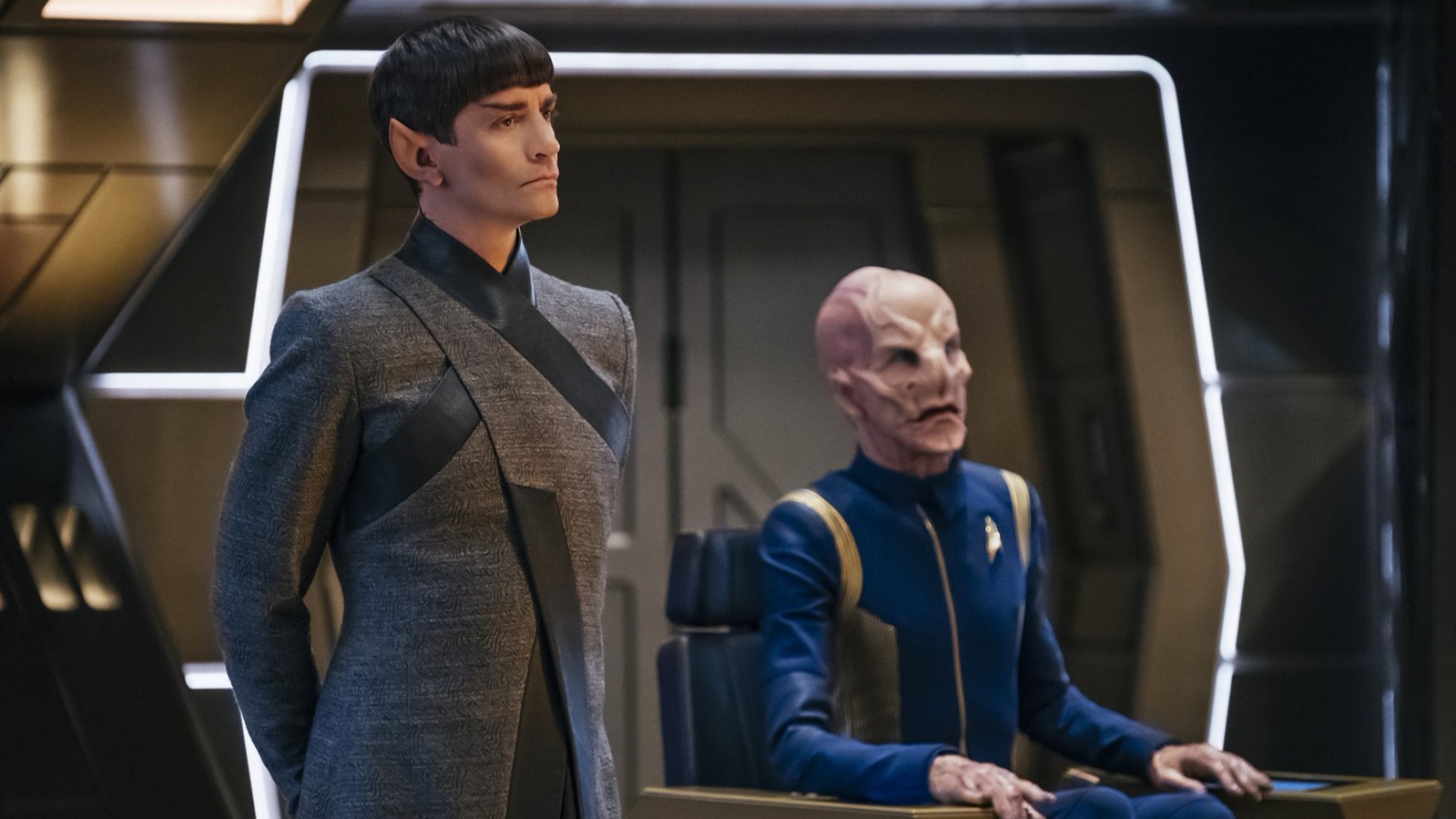 Oh, Star Trek: Discovery–still my favorite Trek and my love grows more intense by the episode. “Will You Take My Hand?” is no exception, with plenty of tension, twists, and ethical dilemmas to keep even the most finicky television fan engaged.

I was all prepared for a huge confrontation and a big final boss battle in this episode but what they gave us was so much better. Rather than all-out war, the solution that everyone arrived at was to compromise with the Klingons and to defeat them on their own terms without actually committing genocide. Even with Klingon forces bearing down on Earth, the Discovery crew all stands up and defies Cornwell’s decision to cause complete ecological collapse on Qo’Nos. They all stand up for their ideals and find a workable alternative that still saves Earth and humanity but that also saves the Klingons. I was honestly in tears I was so pleased with the non-violent approach represented here because it wasn’t so much about not killing in the name of peace as it was about doing the thing that is most ethically compatible with what the Federation claims to stand for. Big battles are cool, but violent conflict is not the only way to resolve disputes no matter what our culture and dominant narratives tell us. Star Trek: Discovery is an excellent antidote to the kind of storytelling that insists there is no way to achieve one’s goals except through force. 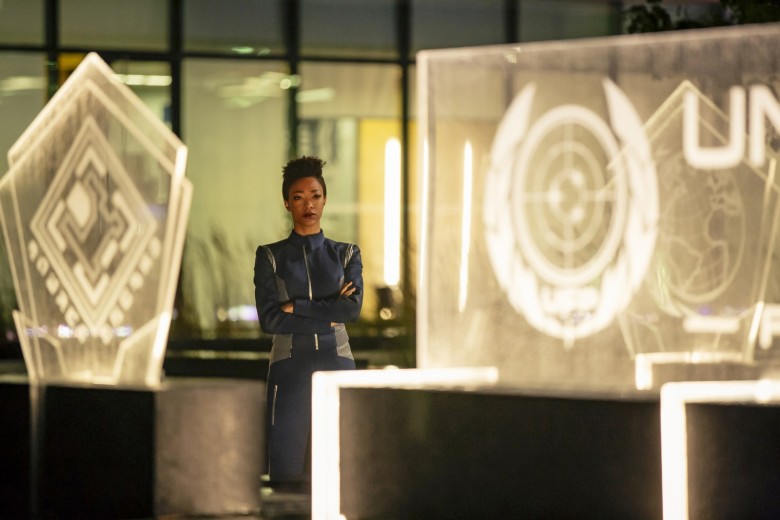 I was impressed with how Ash and L’Rell became such important pieces of both Georgiou’s and Michael’s plans. Everyone insists that Ash is neither fully human nor fully Klingon but some sort of hybrid mid-creature. Georgiou, with her human supremacy bent, finds this disgusting, but I think it’s an apt state of existence for someone who fell in love with a human woman raised by Vulcans. Two people who don’t really belong to any one culture would find Starfleet the most fitting place to be, so I was sad to see Ash go. He’s a complete sweetheart and I like the way the show has dealt with his trauma and allowed him to accept it and to grow from it. I will miss him but hopefully he’ll pop back up every now and then. He’d make a great Klingon ambassador to the Federation, for example, though we do know that in ten years Klingons still hate the Federation.

Emperor Georgiou is one of the most fun parts of this episode, particularly in that she gets to be a horrible person as a foil for Michael and co.’s Starfleet ethics. I like that even Georgiou gets to go free in the end, as agreed, because that leaves her as the sort of series’ roving wild card a la Q or Mudd. I enjoyed Georgiou’s sexual foray with aliens and her continued attachment to the faces she knew in her home universe. Particularly, I loved her interactions with Tilly who immediately caught on to who Georgiou really was and how she’d be expected to act on their mission. Tilly is so sweet, soft-hearted, and awkward that she’s always a delight and is often comic relief without being ridiculed or reduced to a punchline. I adore Tilly and her little moments, especially in this episode with her little Terran salute to Georgiou and getting unintentionally high on volcanic vapors. Another piece of the mirroring effect between this episode and the very first one is that Georgiou used a hydro bomb to bring water to a planet in that opening scene while this Georgiou was going to use one to commit genocide against the Klingons. It’s a nice detail and helps with the bookend feel. I still would’ve liked to see Qo’noS destroyed by tribbles but I’m perverse. 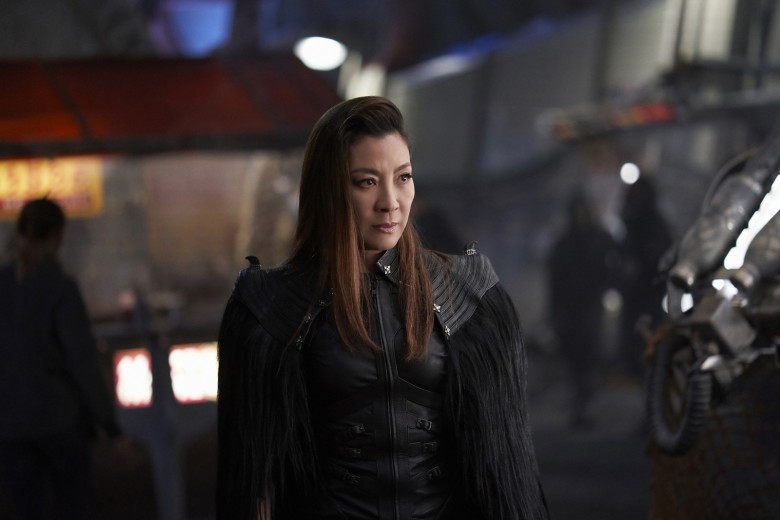 And, of course, I couldn’t sign off without geeking a little bit about Discovery running in to the USS Enterprise and Captain Pike! In a true fit of nerd passion, my friend and I immediately hopped onto Netflix and Memory Alpha to see if we could figure out what was up. So, for the less initiated than I, Star Trek: The Original Series (TOS) had a weird pilot called “The Cage” that featured Captain Christopher Pike. “The Cage” was rejected by CBS and between the filming of of that pilot and the second pilot, the actor Jeffrey Hunter decided he was a movie star and didn’t want to TV. Hence, we got Shatner as Captain Kirk. What I just spent too long nerding about was trying to figure out how much earlier “The Cage” is set than the rest of TOS. Discovery is ten years before TOS and, as my good friend astutely pointed out, if Disco just ran into Enterprise then they’re going to have to cast Spock next season. Spock served with Captain Pike for over 11 years before he served with Kirk and he’s going to be on that ship. “The Cage” is set about two years before Discovery’s present.

The most important thing I realized during this trip down the rabbit hole is that an enormous part of why I love Star Trek: Discovery so much is because I genuinely adore The Original Series with all my heart. Even the worst episodes of that show are dear to me. Discovery takes the spirit of TOS and truly puts it into practice because it’s no longer constrained by the social and political strictures of the 20th century. You can actually have complete and full equality amongst all genders, races, sexualities, species, and every other differentiating characteristic of sentient organism. You can have conflict between members of Starfleet by showing how they resolve the conflict. You can show that the utopian, egalitarian future of integrity and honesty is possible by showing how all of these people maintain their values under extreme pressure and in trying circumstances. Discovery gets to keep the high-minded ideals of this show’s original incarnation without seeming naive or dated precisely because it forces its characters to confront the darkness within themselves and in their universe at large. It’s painfully relevant in our current cultural climate because it demonstrates that there is a way forward through hard, trying times that will let you keep your goodness intact. We all need a little bit of optimism right now.