The latest film from George Clooney as director is an uneasy mix of disparate elements, and while it may not ever fully snap into focus, it is clearly an ambitious attempt to marry dark comedy, film noir, and social commentary.

Clooney’s defining characteristic is his sense of humor. If there’s ever a decision of his that seems confusing, just run it through the filter of whether or not you think it made him laugh. He loves to play jokes on his friends, especially long-con jokes that take months for an eventual punchline. Even his most serious work can be underlined with a wit that makes the bitter palatable. When he’s given license to cut loose and indulge his inner doofus, he does so with relish, as does Matt Damon. It seems clear, then, why the two of them were intrigued by the possibilities in a long-unproduced script by Joel and Ethan Coen.

If you pay attention during the film’s opening logos, though, the Dark Castle title card goes by right before Clooney’s Smokehouse Pictures. Dark Castle was the genre arm of Joel Silver’s company, designed for more overt horror and thriller fare. There are two totally different movies unfolding in Suburbicon, and one of them is a sub-set of film noir that I have a fondness for, the story about the dumb guy who decides to mastermind a crime. The Coens love those kinds of stories, too, and one of the joys of watching Noah Hawley turn Fargo into an ongoing television series is that he understands exactly why those stories are so much fun to watch. 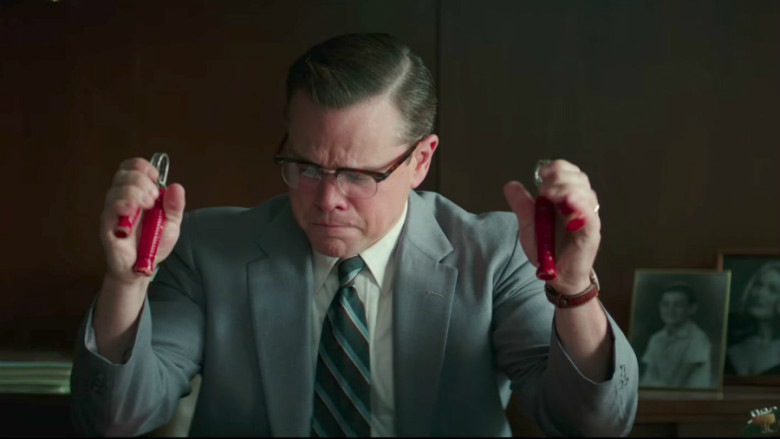 The other story here, though, is anything but fun, and it’s the friction between the two where Clooney’s real ambition lies. Taking inspiration from real incidents, Clooney tells the story of the Meyer family, the first black family to move into Suburbicon, which is presented as a white mecca, an early-‘50s community that is familiar to anyone who has lived in American suburbia at all. My family moved frequently, so I’ve lived in versions of this neighborhood in Florida, Texas, and Tennessee, and I’ve seen places where things hadn’t changed at all from the vision presented here. I find suburbia somewhat terrifying at this point, cloistered and suffocating, and being a homeowner in a neighborhood that was literally in the shadow of the perfect template from Spielberg’s E.T. was enough to convince me that it is not a life for me. It was the American dream, though, packaged and sold, and the only thing the Meyer family does wrong is believe the dream that they were sold. I wish Clooney had made these two different movies as two different movies, because I’d like to see their story told with them as the actual primary focus. The film opens with the mailman going house to house, and he’s the first one to come face to face with the family, the first to realize that something has shifted in their suburban “paradise.” He carries the news quickly, and by the end of the day, there’s a town meeting, the all-white faces red from panic and fury, and Clooney leans into the ugly of it. They’re trying to not sound racist as they sputter and spasm, but the Meyers family never stands a chance. They are “the other,” and they will never be anything else.

The community starts a concentrated effort to drive the family out of their home, and it serves as an ongoing thing, this running thread that is constantly playing out. The film, though, is busy with the story of Gardner Lodge (Matt Damon), a mid-level office square who is married to Rose (Julianne Moore), a down-the-middle ’50’s housewife who takes care of their son Nicky (Noah Jupe). Rose’s sister Margaret (Moore in a dual role) is also a constant presence, and all seems to be perfect. Then Nicky is awoken in the middle of the night by his father who tells him that men are in the house. There’s a strange, muddled home invasion that leaves Rose dead and the family in pieces, and as Gardner tries to pick up and move forward, his son begins to suspect that all is not as it seems. The film is largely told from Nicky’s perspective, but it jumps around enough that it feels scattered. Maybe leaning into that might help bring the two disparate films together more, because Nicky is the only person who takes any time to get to know any member of the Meyers family. The film’s none-too-subtle message is that we spend our time in America worrying about what will happen if we are invaded by “the other,” when the real moral rot is here. We’re the ones we should be paying attention to if we’re really worried about what’s going to hurt us. It’s a worthwhile sentiment these days, but Clooney can’t wrestle these two halves into something that makes it feel like those halves belong together. Even worse, he makes the point that kids are able to set aside all the ridiculous baggage that adults have, and that seems to be about as deep as the thought goes. Man, if we could all just play baseball together, it’d all be okay… 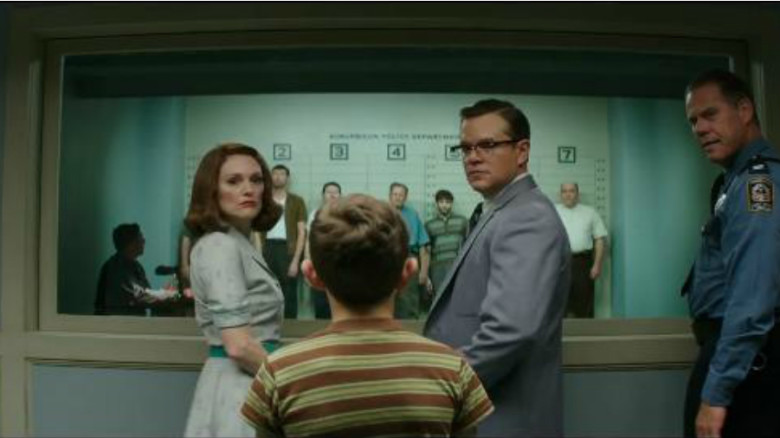 There’s plenty to like in the film, and that shouldn’t be a surprise. Clooney’s always been good at building ensembles, and the cast is terrific. Damon likes playing these doughy white failures, these morally compromised men who don’t know how to dig themselves out of the graves they’ve made. Gardner’s a particularly nasty piece of work deep down at heart, but he hides it well. Julianne Moore only gets to play twins for a few minutes, so most of what we learn, we learn from the way Margaret tries to step in and fill Rose’s shoes, and it’s a creepy performance. Moore’s been at this for a long time, and she still finds new notes to play with this kind of brittle phony. Noah Jupe’s asked to carry a lot of the back half of the film, and he steps up. It’s a nice, natural kid performance, and Clooney helps keep him from feeling mannered or rehearsed. There’s a real nightmare playing out for Nicky, the slow realization that your father is a moral vacuum, a piece of shit that just happens to share your home, and for a kid who is younger than ten to play something like that with nuance is impressive. There are plenty of other strong performances in the film. Oscar Isaac shows up as an insurance fraud investigator, Glenn Fleshler is a egg-shaped weirdo who becomes gradually more dangerous the longer he’s strung along, and Gary Basaraba gets a rare chance to play the hero as the gruff-but-decent Uncle Mitch.

The production design is the exact plastic nightmare it’s supposed to be, and Robert Elswit wraps things in a burnished dreamy 1950’s sheen. Alexandre Desplat’s score is lush and menacing, appropriate for the darker, more serrated corners of the film, but it almost starts to suffocate things after a while. There’s a touch of Hitchcock to the way Elswit and Clooney approach the set pieces, but it’s the Hitchcock of The Trouble With Harry, not the master at the top of his game. There’s something vaguely malicious about the storytelling itself. It’s more cynical than Clooney seems to be in real life, and it makes some of the genuinely dark laughs stick more than they otherwise might. It almost feels like this is an admission of defeat. The mob gets its way. Progress rolls back. No one good gets to win. And that’s America. I’m not sure I buy that Clooney feels that way overall, but as a snapshot of a moment in time, it feels accurate to right now, and it’s understandable that he might feel that way.

Trying to read this as a direct comment on our current political moment is foolish, though, precisely because this one’s been kicking around for so long. It feels like a movie that was left unsolved by the Coens, and then Clooney and Heslov were convinced they’d figured out the way to crack it.

Sadly, though, they had not.