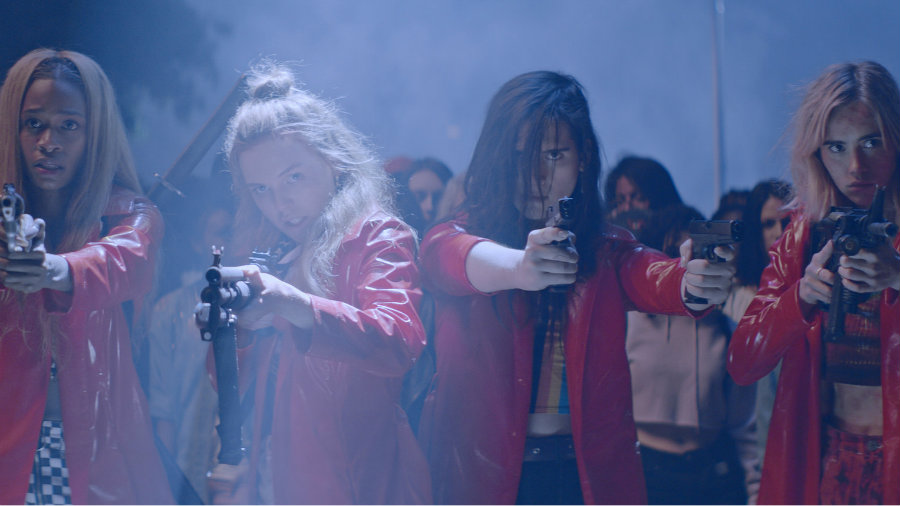 The 2018 Sundance Film Festival is motoring along into its second weekend with a series of lower-key acquisitions over the past few days, and few of the big players (A24, Netflix, Amazon) doing any of the spending.  The latest film to be picked-up, this one out of the festival’s Midnight section, is Sam Levinson’s Assassination Nation, a timely and topical thriller about a suburban town rocked by scandal and controversy and where that leads.

The distribution rights to Assassination Nation was picked up by fledgling distributors Neon and AGBO, the latter being the production company launched by Avengers: Infinity War directors Joe and Anthony Russo. The two companies paid upwards of $10 million to release Levinson’s film globally.

Written and directed by Levinson (Another Happy Day), Assassination Nation takes place in the suburban town of East Salem, USA centering around a group of snarky teen girls, played by Odessa Young, Bella Thorne, Hari Nef, Abra and Suki Waterhouse. Tempers flare in the town when a string of Email hacks by an unknown person leaves the town reeling with what they’ve exposed about the mayor, the girls’ high school principal and eventually, everyone else in town. The girls get caught in the crossfire as they’re blamed for the hacks.

Personally, I was not a fan of the movie at all for reasons I’m not going to get into just this moment, but Jeff Sneider and others seemed to like it, so maybe it will be more commercially viable then I’m expecting from my own tastes. It’s certainly a movie that’s timely and topical in the way it takes many recent social media headlines to their furthest extreme.