AGENTS OF S.H.I.E.L.D. is miraculously still amazing and I’m torn between enjoying the rollercoaster ride and waiting for the cars to fly off the tracks. The series started off so very bland that I’m still a bit tentative about strapping myself in wholeheartedly but I am right on the verge of fastening that seatbelt. The thing with Agents of S.H.I.E.L.D. is that the story needs to be bigger than the film stories in the MCU but the character focus needs to be smaller. It has more space to work with, but it takes up a lot of time. To stay good it has to be grand, to stay interesting it has to be intimate. It’s an interesting problem to have, but I’d say at this point they have it figured out, and how.

I did a crazy thing for you all and re-watched all of Agents of S.H.I.E.L.D. last week so that I could give equal consideration to all the characters rather than just my pets. Let’s see how I do. Re-watching it also might be cheating because, truth be told, it’s quite a tightly plotted little series when taken all at once (and when you already know what’s coming.) It’s spreading it out over many, many months that makes it seem completely ridiculous and full of more holes than Swiss cheese.

It occurs to me that the thing truly missing from the first season was conflict. Any sort of conflict. Anything more than the straw men and trickling mysteries that did (you know, way later when no one cared anymore) finally lead to some serious crapola hitting the fan. With Hydra out in the open and every government agency on the planet out for S.H.I.E.L.D.’s hide this season there is conflict in spades which means that the plot side of the action/plot action-movie formula that’s so effective in the MCU movies finally balances the sort of awesome carnage that Ming Na Wen and co. unleash with aplomb. 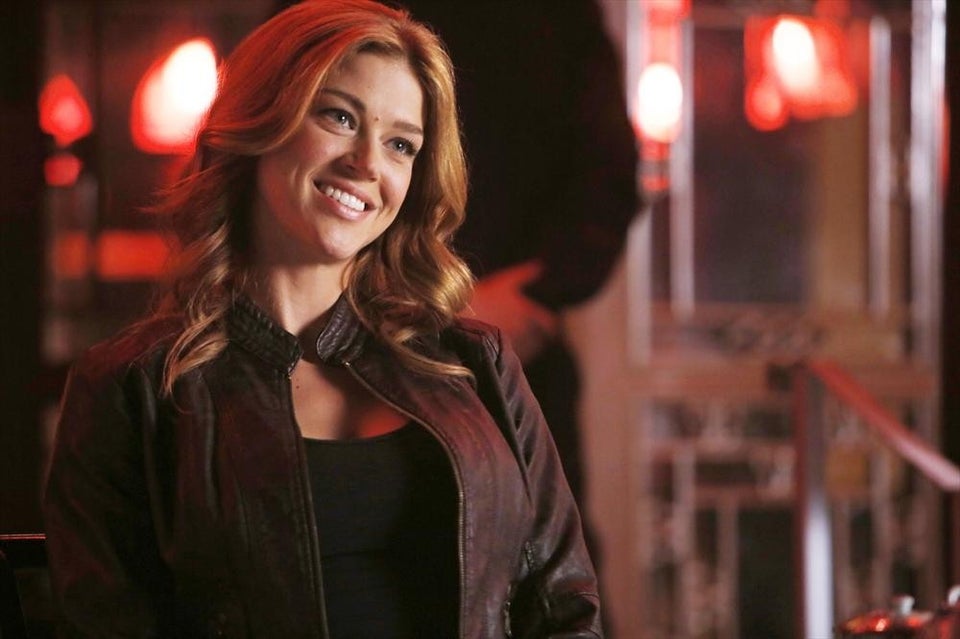 I’ll start with my calmest observation: Bobbi and Hunter are wonderful. After Hydra attacks a U.N. meeting in the guise of S.H.I.E.L.D., Coulson sends May, Bobbi, and Hunter to Japan to track the weapons and find the Hydra agents responsible. Bobbi and Hunter bicker, flirt, and battle all over the world which provides a desperately needed lighter mood and plenty of laughs to what was becoming a painfully dramatic emotional torture-fest (or was that just me?) May, Hunter, and Bobbi also get some amazing (plot-relevant!) action scenes, through which all the bickering continues. Strike all my complaints about Hunter from the books. His one-dimensional obsession with his ex-wife is marvelous, once we know who that ex-wife is. And his constant inner struggle between being a loner and liking his S.H.I.E.L.D. compadres lends him pathos.

Sometimes, there are characters or plotlines so perfect to me that I live in constant fear that they’re going to get screwed up. After last season (and if you couldn’t tell by now) that’s how Fitz and Simmons are for me. So what, then, would be Simmons reason for leaving Fitz? I don’t know what I was afraid of, but I was terrified it would be something that tainted them for me. But it was perfect. Because it’s not down to anything Simmons thinks or feels at all. It’s all on Fitz’s end. Fitz is the one who believes Simmons rejected him. Fitz is the one who tries so damn hard when Simmons is around to be like his old self (he puts this off on her being “unable to accept” that he’s not the same). Fitz is the one who demands to know why she abandoned him. And Simmons’ eyes fill with tears practically every time she’s in the room with him, seeing just how bad she is for his well-being. She has to steal herself up to even walk through the door. It’s all down to Fitz wanting too much–not from her–but from himself for her. Every word she says he takes as another rejection (and Simmons is quick to point out to Mack that there never was a rejection in the first place.) Ugh, FitzSimmons, you’re killing me. Ugh. He missed her so much he imagined her into being, taking her absence in the worst possible way, but when she comes back every word she says is like a thorn in his side to the point where she can barely say anything at all without bursting into tears. Simmons just wants her Fitz back–not the Fitz he was, but the Fitz he is–and it’s Fitz who thinks she wants something else. I’m going to stop before I go full fanfic mode on you. Suffice it to say, the tears are in my eyes too, yo.

Given that we all know how obsessively in love I am with FitzSimmons, let me shock you by loving Ward as well. Yes, Ward, the man responsible for all my current pain. Ward’s introduction touts him as a super spy on par with Natasha Romanoff. For ¾ of Season 1 he is the personification of a crisp suit with a gun and kung fu skillz. I loved to call him “Cardboard Ward” he was that boring. But then, boom, he’s actually a Hydra agent with a screwed up past and that casts the entire first season in a different light–but only when you re-watch it. Because he was boring on purpose. He was so intentionally flat that it should be suspicious, but the series was untested and it just came off as bad writing. Every nice thing he does is suddenly laden with creepy insinuating undertones. He becomes (*gasp*) interesting. Yes, Ward is interesting! There are two types of characters that I will fall for instantly: exuberant awkward scholars (see previous paragraph), and morally ambiguous villainous types. Ding ding ding! We have a winner! And don’t worry: I’ve been told how ridiculous it is for me to love both the character that’s done the maiming and the characters that have been maimed. This is becoming a pattern with me. 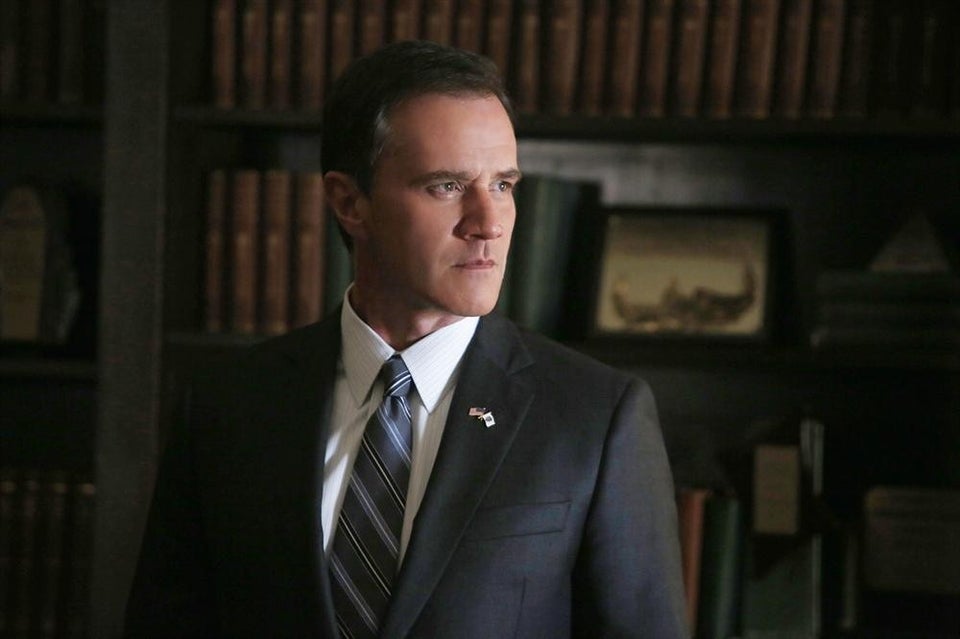 So when we meet Ward’s high-profile U.S. Senator brother Christian Ward (played by Tim DeKay who I adore from the ill-fated Carnivále) we end up with two conflicting stories. The first is the one we have from Ward about how his older brother forced him to do terrible things. The second is from Christian about how Ward is just a terrible human being. Despising bullies, I side with Ward instantly. Because Ward is seriously freaking out when Skye talks to him about his brother, and up to now he’s been reserved and contained while in containment. There is one place he doesn’t want to go and that’s Christian’s clutches. I don’t want him there either. Even if he is a horrible back-stabbing traitor with a stalker-y thing for Skye. While I might seem like the last person on Earth who should be jumping on this train, I am grabbing hold of the handle and taking the leap: Ward is a good guy. Or, at least, he’ll turn out to be one. Ward’s march out was covered by such a stirring score that I said “I hear you, Bear McCreary” for the first time since Caprica. And then, of course, Ward takes out all his guards and we cut to black.

The plot of the episode is also deliciously twisty, with a Belgian politician who turns out to be third generation Hydra tricking all the remaining S.H.I.E.L.D. agents into seeking asylum in Belgium so Hydra can cross them off. Of course, the reason they’re all fleeing in the first place is because of Christian Ward’s draconian suggestions about how to handle anyone even suspected of connections to S.H.I.E.L.D.. I do not like you, Christian Ward. You are already in a bad place with me. (How does this show keep getting actors who I love to play their villains? It gives them an even creepier undertone because I find them all so charming. Shh, Christian Ward is a villain: I’ve already decided.) As for where our Agents stand with the U.S. military, Talbot shakes May’s hand, in the end. We may not be allies, but we at least are not total enemies. And the after-credits scene (after the Avengers trailer which I’m not even going to touch right now) brings us back to the alien writing, with a mysterious man having it tattooed all over his body. I am so jazzed about this show I might need to go for a run or something to work off all the adrenaline.

I loved that this episode wasn’t directly related to the larger plot of alien writing and mysterious parentage but that it was still very relevant to our characters and their current plight. I felt like we’d been talking directly about the Obelisk (or should I say the Diviner?) for long enough and needed a break. A character-focused episode was just what we needed, and we got that even during action sequences.

I’ve not completely accepted that Simmons got out of Hydra unscathed. For all we know she got brainwashed into a sleeper agent. Not that I hope that’s so, but it would make for some serious drama (and I have a thing for the Power of Lurve bringing psychotically rampaging friends back from the brink. Just me.) Let’s just say, if it happens I won’t be surprised (and will be that insufferable jerk shouting “TOLD YOU SO”) but if it doesn’t I’ll be relieved. At present, I think she’s got enough damage to deal with without contending with Hydra sleeper programming as well. I’ll fic you just a little bit: Fitz isn’t the only one who keenly feels part of himself has been cut away, if you know what I mean. They always were a package deal.

At this point I feel like I should launch confetti every Tuesday night and just declare it party time when Agents of S.H.I.E.L.D. airs. I mean, literally the only thing possibly left for me to complain about is that there’s not enough Tripp.