Tweetable Takeaway: “Agents of S.H.I.E.L.D.” gets the team back together and sets all its hanging plots in motion.
Tweet

Before we get down to it, I’m going to stop pretending AGENTS OF S.H.I.E.L.D. is in any way a mainstream television show and just accept it’s cult-y nerd status. Presumably, the only people who still watch it are weirdos, Marvel junkies, and possibly older children (of which I am all three.) No offense if that doesn’t describe you (what are you doing here? Are you lost?)So, now that we’re all nerds here, let’s talk about “A Hen in the Wolf House”–a perfectly delicious name for a Simmons-y episode. I’ll make a conscious effort this week to give you less snarky recap and more snarky review (because, hey man, you can watch the show as well as anyone.) Interestingly, I find it difficult to review Agents of S.H.I.E.L.D. episodes, because even though the series has found its footing and even though I thoroughly enjoy my weekly bite-sized MCU treat, I still don’t really know (most of) the characters and find them hard to discuss in relation to themselves. 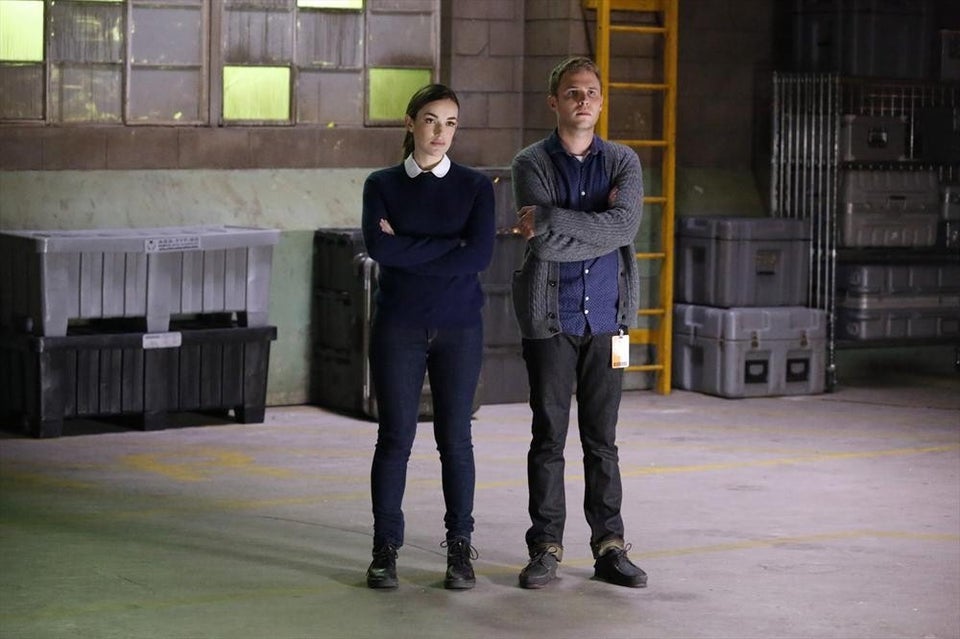 So let’s pause this jam session for a moment while I tell you just exactly why Fitz and Simmons are the greatest thing on Earth 199999. When we first met them, they were so inseparable that they were referred to simply as FitzSimmons and constantly finished each other’s thoughts. As a genius science duo, they were unstoppable, with Fitz on the physics and tech side and Simmons on the biochem. They were young, bright-faced, fresh from a S.H.I.E.L.D. Academy lab, and completely inept at anything resembling combat or subterfuge. Simmons had talked Fitz into accepting Coulson’s offer of fieldwork, the implication being that they’ve been working together (and consequently been the best of friends) for years on end. They were the most well-rounded, the most charismatic, and the most flawed characters in Season 1, and it made them the most compelling. If you tried to make me pick a favorite between the two my answer would be to run away quickly. All it takes is one too many near-brushes with death (way at the beginning) and Simmons ogling a sexy man or two for Fitz to realize his romantic feelings for her and for me to realize I am well and truly gone for these two goobers in every way possible. Fitz and Simmons gave me all the good things in spades. Even disregarding crushes, the two care deeply about each other and function flawlessly as two halves of a whole. And the best part? No one ever said the trite “I love you,” nor were there any declarations of love or ardent face sucking. There was simply understanding. And then of course disaster.

But, whenever enjoying television nerd love affairs I never forget the lesson of Angel’s Fred and Wes. Fred and Wes spent most of three seasons tip-toeing around their mutual feelings for one another only to get together and promptly be torn apart forever, all in the same heart-rending episode that ranks high on my “Do you need emotional destruction today?” short-list. Have Fitz and Simmons had their Fred-and-Wes moment? Painful as their current parting is, I really doubt it. Let us also never forget the multiple sets of Whedon fingerprints smeared all over Agents of S.H.I.E.L.D.. This all leaves us in a place wherea damaged Fitz imagines the most social, kind, and intelligent parts of himself as a Simmons that only he can see and believing the real Simmons has rejected his feelings. Simmons is undercover in Hydra and in peril every second of every day (did she reject him? There’s quite a bit of missing information.) We begin this week without FitzSimmons but with Fitz and Simmons. It seems that the show’s creative team realizes that Fitz and Simmons always were and largely remain the most compelling part of the series (despite other plotlines featuring alien serums and mysterious parentage), and even separated they never leave us to wonder for too long what either one is up to. 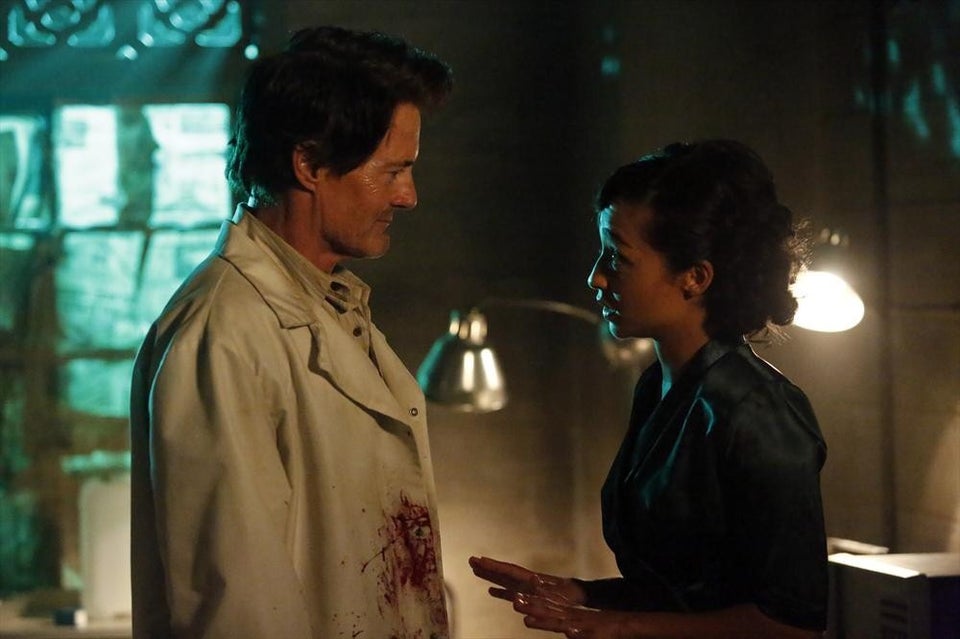 Because, marvelously, this week we get back to Simmons with Hydra. Hydra has been trying to reverse-engineer and weaponize the Obelisk technology to fairly disgusting results, and Simmons is finding it harder and harder to pretend she’s all right with helping them do it. I’m glad that the mysterious object they introduced in the season premiere has been a relevant part of literally every episode so far. They’re keeping the mystery of it alive but not harping on it so hard that it’s eye-roll worthy. It seems they learned their lesson last season dragging out Coulson’s return from the dead in hammy ways until I no longer cared.

Raina, in deep trouble, tries to talk the Doctor (hurray, more Kyle MacLachlan!) into giving her the Obelisk back, but he goes a little crazy and clearly needs some anger management courses. I’m a lot in love with MacLachlan, so take it with a grain of salt when I say he straddles a fine line between completely terrifying and weirdly sympathetic. I’m still tantalized by the mystery of what exactly Raina, Skye, and the Doctor are, which means the payoff better be huge (you hear me, guys? If this is your 2+ season mystery, I’m expecting it to be good.) Raina, in desperation, goes to Hydra HQ to try and talk Whitehall out of killing her but spots undercover Simmons instead. She changes her plan to blackmailing Coulson.

Hydra suspects a mole and Simmons is menaced by a sexy lady in a red suit who claims to be a Hydra hardass. Simmons understandably freaks (so do I.) Meanwhile, Raina tries to trade Simmons’ safety for taking Skye to her father and Coulson balks. Raina’s e-mail blows Simmons’ cover and the sexy lady appears, beats up some Hydra agents, and tells Simmons to run for it. This lady is S.H.I.E.L.D. agent Bobbi Morse (yes, another comic veteran, we are definitely full of them this year). Me, I’m shaking in my boots because either Simmons is about to get captured and brainwashed or she’s going to go home, and either way it’s an emotional rollercoaster. (Because who’s at home? Fitz, my friends. Fitz.) They leap off the building and are caught on a hovercraft piloted by Tripp’s lovely super-spy self. 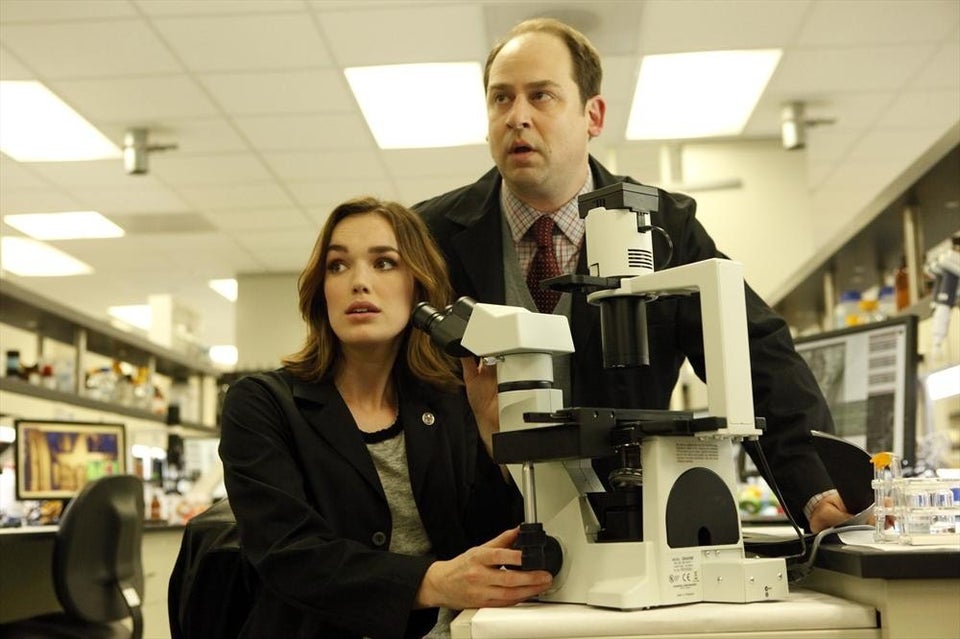 Meanwhile, Skye flips out and tries to find her father on her own. There’s nothing left but a photograph and some stalker cameras. Coulson find Skye and gives her a hug during her emotional meltdown, all while the Doctor looks on using his cameras. Uh-oh, replacement father figures! This should end well. Skye and co. find the bodies of the criminals the Doctor murdered and conclude that “he’s a monster.” The Doctor drives off with some serious road rage and goes straight to Daniel Whitehall with the Obelisk, citing Coulson as their mutual enemy. See, I told you this would end well.

Skye, blessedly, is finally in the loop with Coulson and she can use her computer magic to help figure out what the hell is actually going on. I thought Skye was bordering on useless so far, just staring at the carvings that Coulson was giving her and doing little else, but this episode gave her a variety of emotional traumas and revelations that made her relevant again. Still, I’d like to see more of Skye in action rather than just Skye as the center of mysteries. But it turns out she’s been formulating a theory this entire time–the strange carvings, she tells us, are a map of some kind. A map of what, Skye?

Bobbi will be staying with us (hurray, more ladies!) and is actually Hunter’s terrible she-devil ex-wife. Which truly makes all his yammerings even better, now that we’ve met the lady and seen her awesomeness first hand. Hunter just can’t handle the glory.

And here, I was actually shaking in terror for Fitz and Simmons’ reunion. Would they explode? Would they be totally weird? What would happen? Mostly, they were Fitz and Simmons. I imagine we’re leaving all that drama for another day. (Yo, I would come back for these two even if the rest of the series was deplorable. I’ve done it before. Last season. Numerous times.) Now, I want Fitz and Simmons together, but I don’t actually know if I want them together romantically. On the one hand adorable Fitz with his adorable crush is precious and gives me breath. On the other, Simmons being originally oblivious and in no way obligated to return his feelings (and decidedly remaining in control of her own personal life) is also extremely refreshing. The two were so tight, it’s painful for them to not be together, but whether that’s down to romance, confusion, or S.H.I.E.L.D. necessity remains to be seen. Simmons had about 30 seconds to process Fitz’s feelings (and they were both in extreme distress) before he was irrevocably brain-damaged. What’s that sort of thing do to a girl?

I had a short laundry list of complaints that I’d been storing up for about a week, but they’ve addressed the majority of them in this episode. I thought Hunter’s constant harping on his harpy ex-wife was a fun quirk, but it didn’t really qualify as backstory. Enter Bobbi, and hopefully their bickering will provide some levity. I still want Tripp to have something to do, as he’s intended as Cardboard Ward’s super spy replacement and I’d rather not have him turn out to be a quadruple Hydra agent just to make him interesting (tell me more about your Howling Commando grandfather, Tripp!) I want to know anything about Mack. And while the shared trauma of our original dream team gave us plenty of history, there’s still so much we don’t know about them.

All that being said, we’ve picked up plenty of new meat, the team’s all back together, and the multiple hanging plots have finally been kicked into gear. I continue to look forward to the mysteries Agents of S.H.I.E.L.D. will bring and to the impending crazy pain as well.