This week’s episode of Agents of S.H.I.E.L.D. was a fun jaunt that was actually relevant to the plot (gasp! For the fourth week in a row!) May and Coulson tease us with their perfect platonic banter, Fitz was part of the team again, and everyone else was cute window dressing. But there’s nothing wrong with cute window dressing every now and then.

We start out in Miami where a bunch of priests roll up in big car. What are a bunch of priests doing in Miami? Well, there was a huge church fire and the only thing that survived was a single Madonna painting. With, surprise, Coulson’s alien writing all on the back of it. What is this stuff?

Skye, Hunter, et al work to hack May and Coulson into an uber-expensive dinner. What’s the dinner for you ask? Apparently the church is selling their miracle painting to the highest bidder. Coulson, of course, would be interested in a painting covered in writing similar to the stuff he is compulsively carving into walls in uncontrollable spells. May is just murderous because she has to wear high heels.

The episode finds Skye, Tripp, Mack, and Hunter with little to do back at headquarters but sit around and tell horror stories about their exes. Fitz skirts around the edges of their banter, saying nothing and skulking. Don’t worry Fitz–I’m paying way more attention to you than to literally anyone else. The team has a horror moment when they hear May laughing while undercover (“Is she all right?”), and yet again later when she relentlessly flirts with a man for the sole purpose of acquiring his retinal scan (“That’s more words than I’ve heard her say ever.”) The true focus here is on Coulson and May, which is fine by me as they’ve yet to get their due. 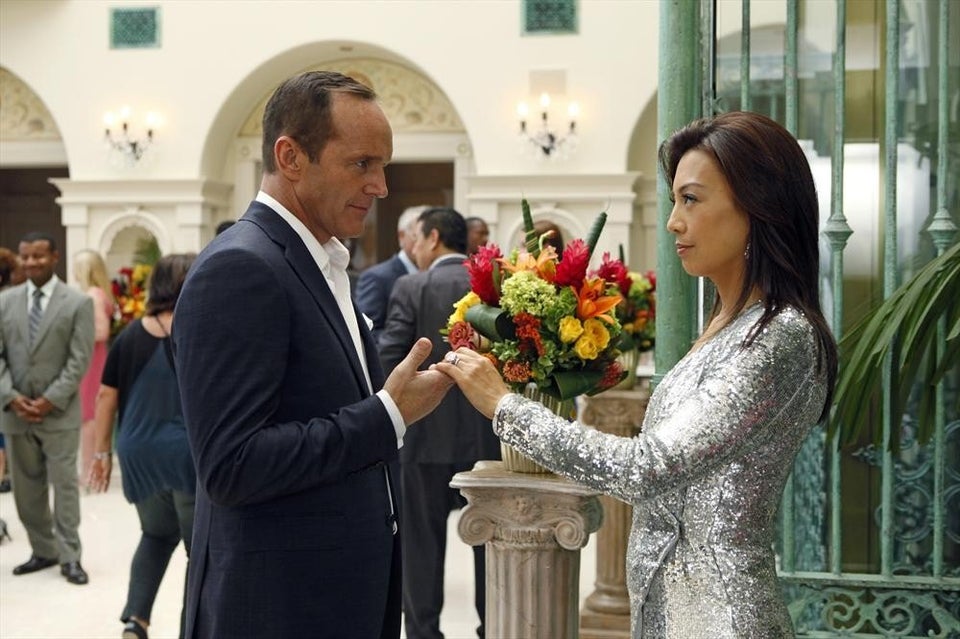 The two of them engage in some swanky dance steps that double (naturally) as a surveillance sweep while they exchange barbs about the good ol’ days and how things used to be. And I’m not talking “last season” used-to-be, I’m talking “just out of the Academy” long, long before we met either of them used-to-be. Coulson breaks this light-hearted mood by insisting that they discuss what to do if he “goes the way of Garrett”–that is, if he goes completely insane and becomes hell-bent on world domination. May won’t talk about it. And then who should show up but–Talbot?

What exactly is Talbot doing at this sketchy painting auction? Coulson decides they’ll just go gung-ho after the thing right that minute. May’s aforementioned flirtation gets them the retinal scan to get into the vault when she and Coulson pretend to be married swingers (“We’re Moder-en,” bless you), and when she and Coulson are infiltrating the vault, May just charges straight through the laser alarms saying “They already know we’re here” (double bless you.) But the painting isn’t there! Talbot’s already got it! Wait, Talbot? Are you serious? What exactly would the Army want with a Madonna that’s all carved up on the back? Talbot discusses his plans on the phone, like a proper villain. Who’s he talking to? None other than Daniel Whitehall–our Nazi/Hydra brainwasher played by Reed Diamond (who I unfortunately switch back and forth between calling his actual name and his character from Dollhouse. Apologies to all. I’ll remember his character’s name eventually.) Seriously Talbot? You’ve got heavy issues with S.H.I.E.L.D. but dealing with Hydra is A-Okay? You’re priorities are messed up, dude!

The entire operation goes downhill in a hurry, which tends to happen when you set off all the alarms. Coulson just keeps trying to get May to agree to put him down if he goes off the deep end. Coulson, now might not be the greatest time for that discussion. Sensing an opening they rush out only to be confronted by Talbot who offers to take Coulson to the painting so he can read the writing on the back. Coulson agrees, and Talbot clears out, but pleasantly, neither May nor Coulson have contracted Idiot Disease. May, pleased to dish out violence, offers to scout out the situation and heads to Talbot’s hotel suite, while Coulson goes back to the Bus. May spies on the folks in the hotel room (the unfortunate lady who spent all of last episode being brainwashed by Hydra) as they read their files on known S.H.I.E.L.D. agents, complete with handy Hydra emblazoned covers. May bursts in, goes after the lady, and is knocked out by Talbot? Talbot? Ugh, I’m so confused. Talbot reaches for his face and pulls off that crazy mesh stuff that Romanoff used in Winter Soldier to impersonate the member of S.H.I.E.L.D.’s board. He’s not Talbot at all, he’s Whitehall’s peon! Look at that nice, cohesive, fictional universe. They make a mesh of May’s face, dress up our brainwashed lady in May’s sparkly dress, and send her after Coulson.

Meanwhile, Fitz won’t talk to anyone and Head!Simmons discusses his issues with him. She tries (quite sweetly) to talk him into participating in group bonding sessions like yammering on about horrible love affairs but all he can see is his own uselessness. He gets a bit snappy with his internal version of Simmons over her rejection of his affections (hon, we don’t kiss all over the faces of people we don’t like; there is a ton more going on here) and hates that they’ve remodeled their lab into a garage and given him a new lab. Not because the new lab sucks, but because no one asked him, and that was the space he had shared with Simmons. I know my priorities are all out of whack, hush. Fitz and Simmons grabbed me early and they’re still the part of the show with the most emotional resonance.

Imposter!May arrives to “take Coulson to the painting” and slaps an ominous looking device onto the Bus’s interior. Sure enough, shortly after she and Coulson are gone, claxons blare and everything goes to hell in a hand basket. Fitz knows what this is. Everyone kindly helps him fill in words like “virus” and “explosion” as he explains that they’ve been infiltrated and need to stop the malicious software as fast as possible or everything will go boom.

Coulson, still trying to get May to agree to kill him, spills the beans to Imposter!May by insisting she take over S.H.I.E.L.D. in his place if and when Coulson goes over the edge. Imposter!May is a bit too warm to keep passing for Actual!May.

For her part, Actual!May is being tortured with live wires for the very information that Coulson just inadvertently gave up. We even get our “You Will Comply” arc words! Coulson beats on Imposter!May’s face in the hallway and makes a ruckus, during which Hydra Peon turns his back and Actual!May, of course, escapes. May bursts into the hallway and begins fighting with the other version of herself while Coulson chases the peon who is escaping with the painting. A few high-tech zaps and some snappy fight scenes later, May and Coulson are in possession of the painting and need extraction.

Back on the Bus, Fitz has taken charge and sends Skye and Mack to fix the worst of the issues while he recruits Hunter’s hands to stop the Hydra virus from spreading any further. Because, if we needed to kick the dog anymore, Fitz apparently has lost his manual dexterity as well. A few hard drive blades switched around and some wires crossed and voila! Problem solved. Because Fitz is an important part of the team whether he still thinks he is or not.

All S.H.I.E.L.D. personnel make it out, but the brainwashed lady knows who the head of S.H.I.E.L.D. is now. Let’s not forget that. Fitz settles into his new lab while Hunter brings in some beers for the team. Head!Simmons encourages Fitz to join them. He takes the beer and she disappears. Fitz completely awkwardly bursts into the current conversation with the story of his bad love life that would have been appropriate like six hours ago: “Hey so, I don’t have an ex but there was this girl that I like and I told her how I feel but she doesn’t feel the same way as I do so she left.” Haha, excuse me while I go sob.

Coulson insists yet again that May agree to kill him in the event of megalomaniacal insanity. May displays the depth she previously lacked, showing Coulson the getaway plan she’s made for him. Coulson adroitly turns her earlier words about nostalgia and reality back on her and makes her swear to put him down. She finally agrees. Wow, that was a lot of action for one fight between friends!

And who should show up in our Marvel post-credits scene but the lovely Raina? And who should show up in Raina’s car but the creepy Daniel Whitehall? He jacks her up with a torture device and gives her 48 hours to return “his obelisk.” The thing that you should never ever touch but that she can hold, no problem. The thing that Agent Carter busted out of Whitehall’s Nazi/Hydra facility long, long ago. I don’t know what he wants it for, or even what it does, but all bets are on “something not good.”

All in all, I enjoyed the episode. The pacing was good, the balance between action and plot is still spot-on, and they hit all the right character notes for the fourth week running. There are two things I currently want: I want Skye to get something to do (besides stare at alien symbols on a screen or get horrifically hit on by Ward) and I want to know more about Mack. But at this point, astonishingly, I trust that they’ll give me all those things in due time. Agents of S.H.I.E.L.D. seems to have hit its stride, offering up a regular weekly treat of Marvel Cinematic Universe goodness. If you need something to tide you over between mega-blockbusters you should give it another chance.