The second episode of AGENTS OF S.H.I.E.L.D.’s second season, “Heavy is the Head,” was largely enjoyable, if a bit like filler. The villain, key items, and even the return of Season 1 characters felt more like laying the groundwork for something larger than compelling in its own right, wrapping up the previous episode’s plotline while also establishing some new members of the team. Even with the set-up feel, “Heavy is the Head” remains as quick-paced and enjoyable as the season premiere. Even if the opening credits had me waiting on tenterhooks the rest of the episode for Kyle MacLachlan to jump out of the shadows.

“Agents of S.H.I.E.L.D.” starts off this week exactly where we left off last week: our new band of mercenaries are stuck in their crashed car–two out of three of them dead, including Lawless’ character Hartley. (Raise your hand if you think Lucy Lawless is actually dead. Put your hands down, guys. This is Marvel. The only person who stays dead is Uncle Ben.) Let’s just say, an action sequence loses something if you have to wait a week to see the conclusion. May chases the villain Creel on motorcycle (no one in the Marvel Universe wears a motorcycle helmet. No. One.) and has to be positively shouted down by Coulson from taking a shot at Creel’s head. What is this, trouble in paradise? I love that Coulson’s authority is absolute in theory but seems to be slipping with May. And I love that May herself, so reluctant to go back into the field last season, waivers towards unstably violent in combat situations. The current dynamic between Coulson and May is a superb illustration of how much the characters (and the series itself has grown). Rather than wasting time and energy on frivolous jaunts around the globe, both of them are solidly in charge of their respective areas of expertise which means they’re frequently faced with interesting moral dilemmas. This lends them both more substance and, as they’re supposed to be the pillar members of the team, the whole thing clicks into place.

Various scenes reveal that the only mercenary who “lived” through the crash (named Lance Hunter) might not be the most trust-worthy of people. (I never caught it while watching so I had to look up his name–turns out he’s yet another character from the comic canon. Somehow, I find this reassuring.) General Talbot tries to talk Hunter into selling out Coulson, even going so far as to call him a crazy zealot hell bent on a mission of vigilante justice. That seems a bit extreme, but at least we know that Talbot is going to provide plenty of conflict in the future. (It occurred to me to look up Talbot as well. You guessed it–straight out of the comic books, complete with weird mustache.) At any rate, Hunter shows back up at Coulson’s super-secret base, promptly tells Coulson all about the deal he struck with Talbot to turn him in, and, despite that, is welcomed back onto Coulson’s team. 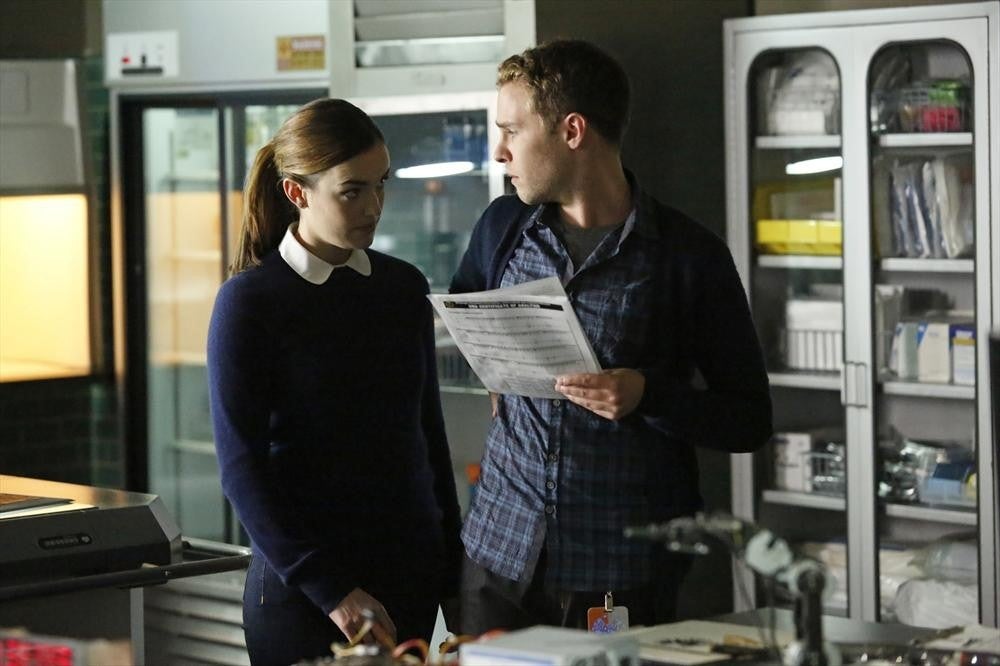 But, let’s talk about Fitz. (Imagine I said that just slightly too loud.) Skye didn’t have much to do this episode except say how worried she was about a laundry list of people. What she did drop on us was that “Simmons abandoned us all.” What? Simmons? My Simmons? What is going on here? You must tell me. We still get to see the Simmons in Fitz’s head, however, as he continues to talk to her to the bewilderment of everyone else. The new mechanic, while not a super-genius technical whiz like Fitz, seems to understand him more than anyone except Head!Simmons. (The mechanic’s name is Al “Mack” MacKenzie, yet another name I had to look up. And, you guessed it: comic book veteran. They are pulling out all the stops, this year! Am I just terrible at catching names, or are they terrible at dropping them?) Fitz’s imaginary Simmons is functioning not only as his intellect, completing his sentences and prodding him into new research, but she’s also functioning as the way he’s evaluating and interacting with his world. It’s Head!Simmons who tells Fitz to talk to Mack because Mack understands the science and is being helpful (and she also, hilariously gives him a good once-over with her eyes.) De Caestecker’s hopeless baby face, a lost expression always just on the verge of tears as he tries to force his brain to work, is calculated precisely to hurt as much as possible. Even with Simmons MIA, De Caestecker and Henstridge still steal the show.

And then, marvelously, who should reappear but Raina–our girl of flower dresses, dubious moral standing, and insatiable scientific curiosity. Raina confronts Creel in an alleyway where Creel is having some serious issues. His special absorbing powers are getting screwed up when his forearm is stuck in the form of the mysterious metal you should never touch. This patch of stuck-arm already got him into trouble when he accidentally turned a café waitress to crunchy metal earlier that day. Raina offers Creel a pseudo-scientific sounding rock in exchange for his services. Creel, telling her she’s crazy to cross Hydra, refuses and steals her rock to boot. Let’s just say, Raina is someone you don’t want to piss off, and he just pissed her off. But what’s so exciting about Raina’s reappearance? Well, Raina is the one with all the answers to all of our series mysteries squirreled away in her head. She knows what’s up with Coulson’s weird symbols. She knows who Skye’s father is. She knows what Skye is. One tends to hope that, for the right price or the right leverage, we’ll someday figure out what she knows and it’ll all be awesome.

In the major action-sequence climax, the crew stakes out Creel’s meeting with his Hydra contact. Hunter zaps May, Skye, and Tripp, steels Tripp’s gun, and tries to seek revenge for his pal Hartley by shooting Creel in the head. Creel, being Creel, turns himself into armor, deflecting the bullet and high-tailing it. His Hydra contact has lost track of the briefcase containing the thing you should never ever touch (reality check: they call it “The Obelisk,” but I like my name better.) Where might it have gone? Raina. Raina has it. You go, Raina! We’ll get back to her in a minute. The scene ends with Coulson zapping Creel into a rock-like state using a device partially designed by Fitz that afternoon (as I cheerlead in the background.) Turns out Hunter’s not a traitor. He’s just a loner, and doesn’t exactly scruple about removing obstacles. Coulson asks him to join the team saying he needs people “who will do the wrong thing for the right reason.” Be still my heart! Can we spend this whole season doing the wrong thing for the right reason? Hunter accepts Coulson’s offer. Hurray, fresh meat! Well someone had to replace Ward full time. I was hoping it would be Triplett, but I suppose we can’t have everything in life. 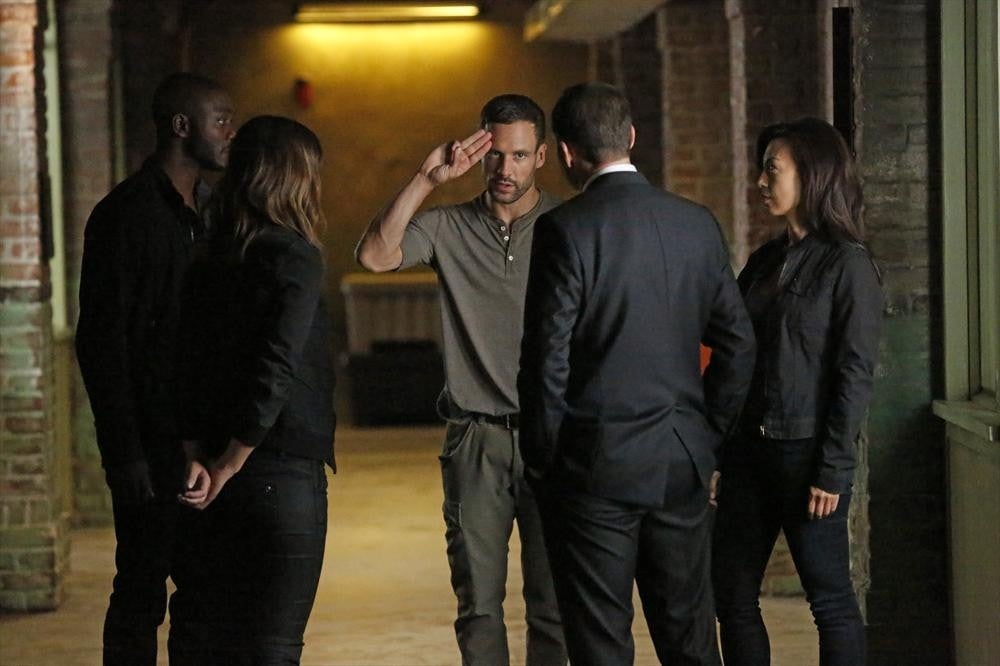 May continues to deny anything is wrong with Coulson, but she then berates him in private for not allowing himself to have “an episode.” A what now? Yup, Coulson is still compulsively carving weird symbols into the wall. But since pretty much everyone is damaged at this point, the only one who’s noticing anything wrong with him is Skye.

Lastly, we go back to Raina, staring at her shiny stolen Obelisk. Kyle MacLachlan finally jumps out of the shadows, commanding Raina to touch it. Touch it? The thing you should never ever touch? Well, this guy is deliciously nuts. He apparently wants to check a hypothesis. Raina touches it and, rather than turning to metal, the obelisk lights up with the strange alien symbols Coulson keeps scratching onto the wall. MacLachlan looms menacingly, exuding amorality and alien pragmatism about the universe. “It worked!” exclaims Raina. “No, it let you live,” says sketchy Machlachlan. “There’s a difference.” Whatever’s up with Raina, it’s safe to assume it also applies to Skye, who had so little to do in this episode, it’s almost enough to make you forget all the mystery surrounding her. Except, bombshell, Mysterious MacLachlan (nameless, though Wikipedia tells me he’s known as “The Doctor”) is Skye’s long-lost and scarily-alluded-to father!

All in all, it might not have been as jazzy as the season premiere, but it’s still a pleasantly well-paced episode that moves the story forward. Perhaps it wasn’t quite as peppy simply because I wasn’t quite as stoked. Still, “Heavy is the Head” is a solid episode with enough plot continuity to keep me engaged and enough character drama to keep me interested. The series seems to have found a nice balance between story and action sequence–something the Marvel films in the same universe have always done extraordinarily well. Now, I’m not one to usually watch episode previews, but the preview for next week heavily featuring Simmons (actual Simmons, not the one in Fitz’s head) and Hydra (!?!?!?) had me shrieking at inappropriate volumes. Yes, I was more excited by the preview for next week than by this episode itself. What can I say? A girl needs favorites. (Dark little crazy favorites who “do all the wrong things for all the right reasons.” Or maybe who just go off the deep-end. Tune in next week, you might get to see one of my patented meltdowns!)