Tweetable Takeaway: Questions finally get answers and Ward’s gray morality is back on the loose in Agents of S.H.I.E.L.D.
Tweet

It might be two and a half years later, but we’re finally getting down to what really brought Coulson back to life after The Avengers and it’s about time! Action-packed and full of plot developments, we finally have an answer to a mystery and I am pleased.

AGENTS OF S.H.I.E.L.D. was not with us last week, which was a shame since it left us with so much cliffhanger drama (and emotional heartache) that I’ve been antsy about it since before Halloween. When we were last with our heroes, Ward had escaped his captivity and some crazy guy walked into a tattoo parlor to get alien writing emblazoned on his skin. “The Writing On the Wall” is evenly split between Coulson’s search for meaning in the alien writing and Ward on the run from his old S.H.I.E.L.D. compadres. 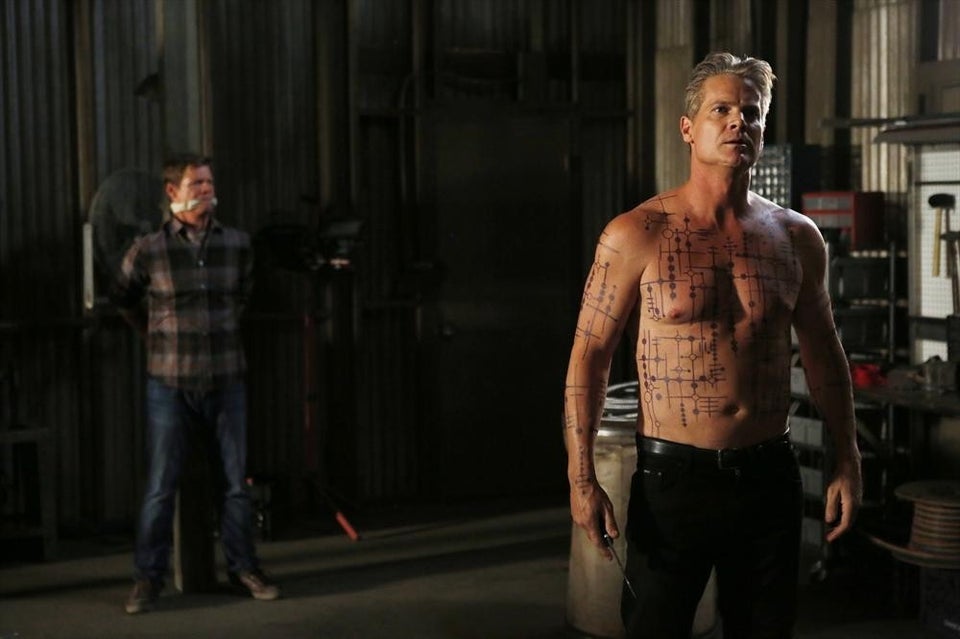 The former S.H.I.E.L.D. Agents from Coulson’s original experiments with the GH325 alien serum are turning up dead with the alien writing carved into them and Coulson is determined to figure out why. Drenched in sweat and compulsively carving the wall, it’s becoming apparent that the crazy is about to take our Director down. May is on the hunt for Ward with every single big gun she can muster (i.e. the four agents with actual combat skills) so it’s down to Skye to help Coulson on the trail of the alien carving killer. They keep finding more and more drawings, but no one can put together what it all means. Coulson insists that Skye, Simmons, Fitz, and Mack strap him into Raina’s old memory machine from last season (conveniently stored in a closet) and extract his memories about running the T.A.H.I.T.I. project so that they can help save the subjects from possible murder. The memories, with appropriately creepy Bear McCreary score, and super-trippy imagery, lead Coulson to the last surviving test subject. He ditches Skye, shoving her into the cage where they kept Ward and heading out on his own, only heightening the impression that he’s lost his mind. The final subject doesn’t paint like the first murder victim, carve like Coulson, or tattoo like the crazed killer: he builds elaborate model train sets. The tattoo man trusses up Coulson for torture, intent on discovering the meaning of the patterns he’s carving into his skin because “the pain helps him remember.” It just so happens that he’s tied up by the elaborate model trains and Coulson quickly figures out why the carvings aren’t making any sense. The alien writing isn’t writing at all. Thanks to the train-building skills of our final friend, Coulson figures out that it’s a three-dimensional map of a mysterious city.

Does this feel all Guardians of the Galaxy to anyone else, or is it just the blue alien that’s giving me that vibe? Whatever it all turns out to be (and mind I don’t read comic books) I’m glad we’re finally getting more than sigh-worthy teasers and melodrama. I also like the way they keep bringing in bits from last season. We all suffered through it while it was boring, so it’s nice to have some sort of payoff for all that effort.

On our other storyline, Ward has himself kitted out with explosives and calls out super-spies Tripp, Bobbi, and Hunter in quick succession as they tail him. It’s all very suspenseful and full of action-movie tension which is enjoyable to watch but leaves me with little to actually say except: good. Ward’s duplicity appears to know no bounds as he meets up with Bacchi (Daniel Whitehall’s Hydra peon) in a Massachusetts bar. When May and co. crash in, they find all the Hydra members killed and Bacchi wrapped up as a present for Coulson. Me, I’m sitting here grinning like an idiot. I love that Ward is still morally questionable and kind of a skeezebag, but also both trying to help Coulson and to atone for his actions. I’ve already been in at least two fights over whether Ward is truly sorry for what he did under Garrett’s command (or even trustworthy) or whether he’s just a master of duplicity and self-preservation. (You all intensely debate the ethics of television characters with your friends too, right?) I have trouble wrapping my head around Ward–not because I don’t understand him–but because my other character loyalties make it hard for me to believe he could ever fully atone for his actions. It’s an interesting conundrum because I both would like him to work towards redemption and feel deep sympathy for his character but I’m also on board with Simmons threatening to kill him if she ever sees his face again. 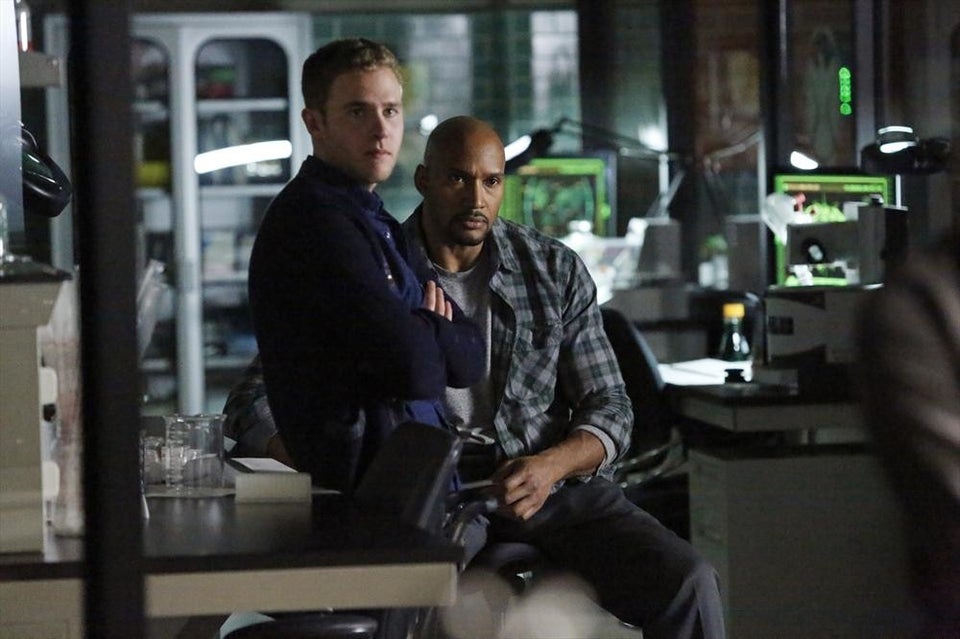 Agents of S.H.I.E.L.D. is so much easier for me to talk about when its plot-heavy and full of action instead of trying to rip my heart out through my chest with FitzSimmons. Fitz and Simmons didn’t really have much to say to each other this week which I’m fine with, honestly. While I’ve been sitting here S.H.I.E.L.D.-less for two weeks and yearning for them to get it together, I feel like the two of them in an uneasy co-existence is an acceptable break from the intense wringer they’ve been putting me through since the end of last season. Mack and Fitz have a nice rapport and get to steal a body from a morgue. Simmons is buried in her work. Simmons and Mack, interestingly, don’t quite get along. I’d also like to report that, last episode, Fitz was still talking to the version of Simmons in his head–I didn’t catch it until I was desperate and re-watched it a few times. I can’t wait for all that drama to come to a head. Fitz orbits around Mack because Mack doesn’t treat him like he’s made of glass and because Fitz can actually form complete sentences around him. And Fitz had a nice epiphany about “brain backups” in there tonight too–I will love to see where that goes. Oh, look, Fitz and Simmons were barely supporting characters and they’re still all I manage to pay attention to.

Ward, hallelujah hands, is out in the world at large–alternating deviance and penance in a gleefully gray way with his sights squarely set on his nefarious older brother. (Christian Ward is nefarious–I’ll need a lot of convincing otherwise.) The various branches of the alien storyline are all set to converge very soon. My brainy duo is in a holding pattern. The super-spies are all-around cool. I say this every week, I know, but man I want Tripp to have something to do. All in all, as with every episode so far this season, I am pleased and I’m ravenous for more.