Tweetable Takeaway: Rainn Wilson’s back with “hate-to-love him” cynical zealous, but Backstrom’s inherently misguided and unsure of itself. Tweet

I’m not typically a fan of procedural cop shows. I sneer at the droves of CSI-this and Law and Order-that. I am, however, a huge fan of Rainn Wilson and detective stories in general. So, when I first discovered BACKSTROM, I was immensely excited about the potential of the series, seeing as it’s the perfect melting pot of several fantastic elements. However, the pilot was more like someone tried to make boxed pasta and forgot some key ingredients, like subsituting soy milk in the place of whole. The end product ends up kind of there, but not really.

Backstrom‘s pilot, oddly entitled “Dragon Slayer,” feels more like a midseason episode than a pilot. It immediately rolls with the punches and throws you into the mix. Detective Everett Backstrom, played by Rainn Wilson, is a Portland detective in the Special Crimes Unit who’s cynical, hateful, rude, and just plain nasty. He has little regard for his health, appearance, or relationships. Using his own superior intuition, he’s able to read people and determine information and motivations. As a character, he’s the perfect lead to fit the current streak of “anti-hero” geniuses made famous by Sherlock and House.

Rainn Wilson is really trying hard, which is the primary reason why a character so despicable would have any merit at all. Wilson has a natural like-ability and charm that steals the show. He’s the reason to watch, and the writers know it. Wilson commands the screen, doing his best to bring something interesting or compelling to every scene, even moments that exemplify poor writing and procedural series cliches. He’s the only reason the show works, elevating the sloppy, brilliant jerk character into something that’s uniquely his own. His performance deserves a show of equal caliber. 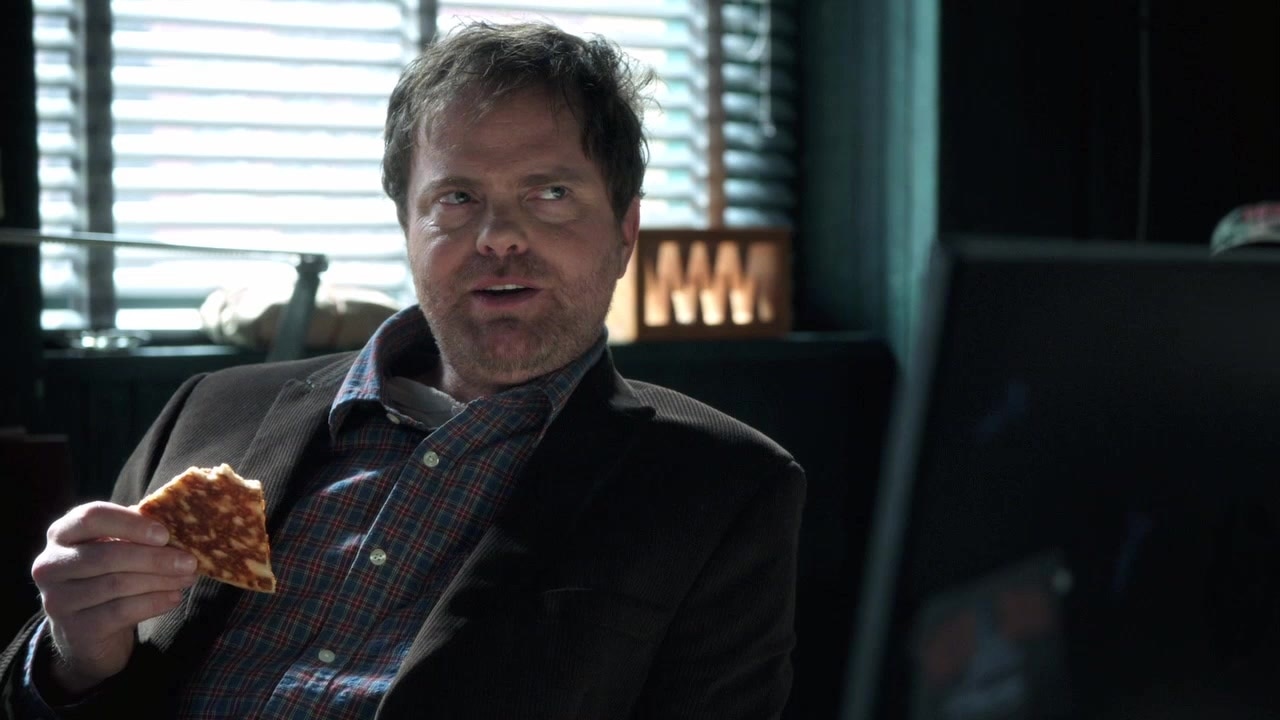 Backstrom‘s supporting cast is a mixed bag, with a few bland what’s their names? and even fewer compelling characters worth remembering. Dennis Haysbert shines as Detective John Almond, a kind, preacher on the weekends, with the highest conviction record in the department. Haysbert’s presence is a welcome one, despite how little of the episode he’s actually in. You can’t help but wish for Haysbert and Wilson to have interactions, but they’re primarily limited to only one scene together.

Genevieve Angelson’s Detective Nicole Gravely is there to bump heads with Backstrom, but manages to find a few moments to bring something unique to the character. Page Kennedy stars as Officer Frank Moto, Kristoffer Polaha as Sgt. Peter Niedermayer, and Beatrice Rosen as Nadia Paquet. They each have a moment or two that showcases a joke or an interesting eye-opener, but aren’t exactly stand-out characters. Thomas Dekker plays Gregory Valentine, a character that’s so blink and you missed him that you wonder why the character is even apart of the series in the first place. Valentine doesn’t exactly bring anything to the series, and is likely only there to make Backstrom look more redeemable and less lonely.

The pilot’s mystery of the week is inherently uninteresting and generally straight forward. It’s the kind of plot you’d find during the fifth season of NCIS: City. A Senator’s son is found dead, hanging off a bridge, an apparent suicide. It was actually murder (shocking!) and there was heroin involved, along with strippers and drug dealers. Yeah, yawn. It’s far too familiar to properly show off the series’ potential.

However, the episode isn’t entirely that way, as several interesting moments do occur in the episode’s final act. A moment of questionable morality occurs, which is when the show finally does something worthwhile and original. The final shootout between Backstrom’s team and a gang of drug dealers leads to Backstrom getting himself tangled into an immoral conundrum that should come back to bite him. This moment screams to be planted as a season-long arc for Wilson’s character, but is seemingly brushed aside with little emphasis. In fact, it isn’t even touched or reflected upon by any characters, let alone Backstrom. This is the series’ major blunder.

The cases’ resolution showcases a great moment for Backstrom and his team. The self-destructive detective catches the week’s baddie in a lie, and exposes his cynical perspective in the process. In the episode’s first half, Backstrom is sexist, racist, and just plain offensive with seemingly no redeemable value. Yet, the second half explores his cynicism, nihilism, and personal sadness in a way that adds a surprising amount of gravitas to both the character and the series.

Backstrom is primarily at war with itself, as its pilot suggests. The episode is split down the middle in quality, with the second half allowing for seeds of potential to rear their heads. There are many elements of Backstrom that are good and could be great, with some work. The series needs to lock down a tone, and the cases of the week need to reflect that. Hart Hanson (the show’s creator) seems torn between making a companion to Bones and delivering a darkly funny drama.

Backstrom could just stay the course and become another carbon copy rip-off of the superior programs that it emulates, or it can deconstruct the “brilliant jerk” character and explore the personal demons and self-destruction underneath. Backstrom can’t be both. The series needs to embrace a darker season-long storyline with lasting impacts in each episode. The potential is there, but the cliched procedural schlock has to give.

Is Backstrom beyond saving? Absolutely not.

(Oh, and that cheap, bland title sequence? That was just appalling and unfitting of any series. Unacceptable.)

Bryan is a filmmaker who is now living in Hollywood. On any given Saturday you can find him dressing like an 80’s dad and singing “Just a friend” until someone asks him to stop.