If you’re at all like me, and I’d like to imagine that a good handful of you are, then you’re a chronic “time flies…” kind of person. Meaning, life catches up with you more often than not. And with a stark flash, not unlike the glass of warm water that Dre threw on Rainbow’s face this week, it becomes clear that the fall slate of television is nearing an end. Or should I say, nearing a hiatus. Only six episodes remain for BLACK-ISH. And for a show that, while generally pretty engaging to watch, has seen its ups and downs in the first three-quarters of its run, is pretty “up” this week. With another eye-rolling current of overdone April Fools’ pranks preparing to seep in this month, the Johnsons face a scary prank of their own. Rainbow notices an eye-raising lag in her menstrual schedule, and Dre, the foolish, foolish husband who lied about having his vasectomy some years back, is in a bit of a sticky spot (so to speak). 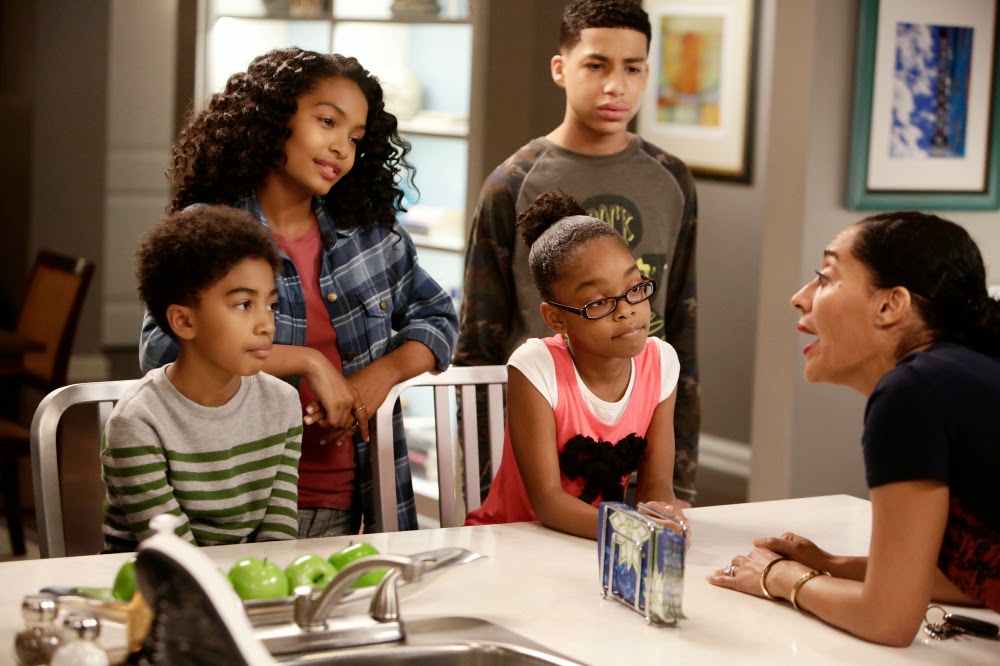 Sometimes a man just needs some peace and quiet in the morning while he’s pulling off a pre-chosen outfit from a clothes hanger that’s also cardboard cutout of his head and upper body. But this fateful morning, Rainbow drops a pregnancy scare on Dre, which ripples and makes its way to the other, non-intrauterine children of the house. The household is then, somewhat predictably, turned on its side, in a very anti-new-baby kind of way. Except Junior, who’s into the idea because he’s the weird, nerdy “other” in the family. And, get this, Dre’s little secret [not getting the vasectomy], actually creates a misunderstanding with Rainbow that gets out of hand (when has that ever happened???).

In a bit of a troubling new trend though, Dre’s only visible female colleague, Laura, again dispenses sound and cogent advise on the matter, but is rebuffed and disrespected time and time again by the pejorative-spewing dudes in the room. You can actually see the Jezebel mainframe short-circuiting and smoking like a cartoon or MadTV sketch. And while a somewhat funny gimmick, at least at first, the whole antifeminist dynamic at work teeters on being overdone and certainly untimely, with gender politics in the workplace being a very real and serious thing right now. But political slants aside, watching Dre fumble through his (of course) half-baked schemes to throw Rainbow off the course and preserve his little secret is pretty darn funny. I mean, as mentioned earlier, watching Dre try to dunk Rainbow’s hand in warm water so that she’ll pee the bed and give a sample for a home surreptitious pregnancy test, before ultimately panicking and throwing the glass of water in her face, was just good comedy.

The only real problem here, and it’s not a terribly serious one, is that the entire episode hangs off this one misunderstanding. When Rainbow ultimately realizes that Dre never went through with the procedure, she has a little fun and brings home some anonymous woman’s ultrasound to scare her husband – and it works, he sets a rat trap on himself and breaks four toes. And beyond that, the truth spills out in a very untidy but oddly relatable final act. “Sex, Lies and Vasectomies” finds a nice, fleshy little chunk at the end of the shenanigans when Dre and Rainbow get real with each other about why she wanted him to get the vasectomy. And why he didn’t do it. For the first time in quite some time, Rainbow gets personal on us; while she loves and has always loved being a doctor, she felt in the past that she was missing out on her kids’ lives, so how could she possibly fathom having another one!? And in the end, Dre and Rainbow’s honestly gives way to a renewed love for one another. Their relationship is not only central to the plot, but built on really artful chemistry by its actors. In the end, you aspire to be a “Dre & ‘Bow” because, ultimately, they’re pretty sweet.

As the season winds down, it seems appropriate to be reflective. Maybe Black-ish isn’t quite the watershed, or even water cooler show that it purported itself to be, but it’s proven to be a fine sitcom. And, for the most part, this week’s episode is no exception. Though, as a recent convert, I should say: “More Ruby, please?”