Tweetable Takeaway: Black-ish strikes the perfect balance between funny and meaningful in its best episode yet.
Tweet

The Johnsons are at it again, and this time better than ever. This week’s episode of BLACK-ISH proves, most definitely, that the third time is in fact the charm. “The Nod” nails the perfect synthesis between what worked in the pilot and what worked last week. And the results are laugh out loud funny.

“The Nod” is based around the idea that black individuals should know to acknowledge other black individuals with a courtesy bob of the head so as to say, “hey, I see you and I recognize what you’ve gone through.” But Dre sees that Junior, to his own sobering chagrin, doesn’t even know about the custom, let alone practice it. His apple has fallen so far from the tree that it’s lost in a shrub down the road a ways. And so, the mission is clear: Junior needs some black friends. Even Pops is on board with this one. 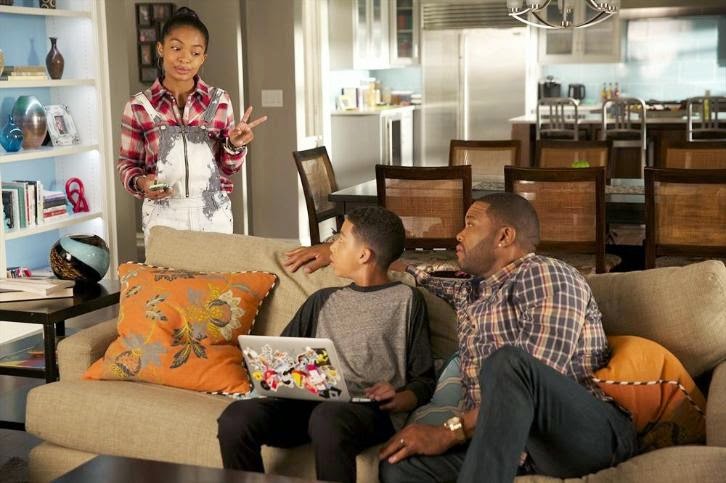 This week sees Junior ever-increasingly pegged as the “outcast,” shunned by his sister at school and constantly with his tail between his legs at the mercy of his father’s errant evangelisms. But his and Dre’s dynamic is really finding a comfortable niche. The two may be fundamentally at odds, but Dre’s domineering dedication to his son’s wellbeing feels more genuine, less self-satisfying, and just plain funny.

Rainbow, meanwhile, brings Diane with her to the hospital as part of her campaign to convince the young girl to follow in Mom’s vocational footsteps. The medical field isn’t quite as glamorous as the star-studded world of advertising so it’s, predictably, a tough sell. And the fringe benefit of free food isn’t enough, because, as Diane herself puts it, “free or not, hospital yogurt is not how I saw my day going.” Diane, played by Marsai Martin, is rapidly becoming the most comedically gifted performers on the show, and her brilliantly precocious comic timing rivals any of her other costars.

We also see the addition of a new character: overly friendly, rigorous hugger and boundary-less Charlie (Deon Cole), a colleague of Dre’s. Charlie offers some valuable advise to Dre: if Junior only saw some of the struggle that his people have gone through, he would better be able to identify and relate to members of his own race. But, as it turns out, a father-son basketball game with the locals at a Compton recreational center doesn’t offer much in the way of inspiration, but offers a lot in the way of sweaty crotches in Junior’s face. The kid is hopeless.

Diane, however, gets an insider peek into the actual goings-on of a hospital staff. And suddenly, when Mom is pulling a tomahawk out of a boy’s head, that tired old medical smock doesn’t seem so tired after all. And so begets a whole new career path– forget advertising; medicine is where it’s at.

Then, in a final effort towards an “overall blackening” of Junior’s social circle, Dre invites Charlie and his son Eustace (nickname ‘Useless’) over for dinner. While Charlie outs himself as a bit of a nutcase, showing Dre and Rainbow “JPEGS of his rectal polyps,” which thank goodness were at least benign, Dre is about ready to throw in the towel.

But up in Junior’s room, Dre sees his son and his new friend bonding over a dorky extra credit – pardon “acknowledgment” project – for school, and something becomes clear: Everyone has their own struggles and their own battles, some more obvious than others. But Junior’s nerdy social periphery is his struggle, and he must embrace it and find it in others. As Dre concedes, “nerd is the new black.”

While the pilot was far too overt in its purpose, and last week’s episode was lacking in any meaning but rife with comedy, “The Nod” finds the perfect balance between the two. From the get-go, this episode is hysterical. And it was impressively able to sustain laugh out loud moments from the opening to the credits. But what really makes this episode special, much like the pilot but more so, is the truly endearing message that unfurls amongst the wacky comedic fallout of the Johnson antics.

Dre’s motivation in this episode is infinitely more relatable than in previous offerings, because his desire to better his son’s life is couched in an effort to edify the boy on the past struggle of his people, which is key. It often feels like the course of the show to “blacken” a new generation of African Americans is without a certain amount of emotional context, but that feels more grounded here with the theme of struggle, and what black people have gone through historically. However crass he may be, Dre just wants the best for his family and that is becoming more and more clear. Black-ish is a show about family, but it’s also a show about tolerance. Sometimes the road to acceptance is paved with misadventure, but that’s half of the fun.

What is becoming problematic is Rainbow’s consistently conceited approach to parenting. The last two weeks find her vying for her kids’ approval and validation, but with very little behind it. Here, with her aggressive efforts to garner Diane’s interest in her chosen profession, she begins with selfish intentions, but ultimately sidesteps coming to any kind of lesson from her own hubris. Sure, she gets what she wants out of Diane, but between this and last week’s episode, I’d like to see more about what makes her tick outside of an unceasing need to maintain her own ego through her kids. Ultimately though, Tracee Ellis Ross is so talented and charming as an actress that a moralistic slant almost feels beside the point.

Black-ish is quickly becoming one of the funniest and most poignant shows on television. Anthony Anderson has more than proven himself as a worthy leader, and I feel more confident than ever watching him steer his ship. And any previous skepticism about the show’s ability to balance comedy and message is shattered this week, finding the meaty center between the two. Continuing in this direction, the show is on its way to becoming a landmark moment in American TV.