Tweetable Takeaway: Will Capone help Nucky out of a jam again?
Tweet

We are now officially half way through the final season of BOARDWALK EMPIRE. Things are still muddled, and there are a lot of strings that need to be tied up in the final four hours of the show. Can they do it? Maybe. Will it be successful? I have my doubts.

For how great “Boardwalk Empire” started, it really has fizzled out the last few seasons. I think it all began with the decision to kill off Jimmy Darmody. His death cut one of the most exciting characters out of the show. Sure it was a great shock moment, and was like watching a father kill his son, but the show suffered. It suffers still.

There are so many different strands of narrative that need to be woven back together to make a cohesive whole. I really don’t see it happening in the last half of the season. We’ve only glimpsed a few characters momentarily (Gillian, Chalky, Dr. Narcisse, and Eli), yet they somehow seem to have a hand to play in the end. Somehow Cuba, Chicago, Joseph Kennedy, Gillian Darmody, Chalky White, Dr. Narcisse, Lucky Luciano, and flashback Nucky all need to converge in a mere 240 minutes of running time for things to tie up nicely. That’s asking a lot.

I did enjoy the scene of Luciano and Van Alden. It may have been my favorite of the night. That moment that passed between the two of them. They’ve met before, back when Van Alden was a fed. I was impressed with the way Van Alden gets out of the tricky situation with a gun pointed at his head. This is an important scene, since it tips off D’Angelo (who is an undercover fed) that Van Alden is a former fed. I think D’Angelo will use this information to give Van Alden a chance to redeem himself. Perhaps working together they will be able to find something to put Capone in jail for that D’Angelo can’t on his own. They better do it before the season runs out. If they don’t, then this whole storyline is a waste of time.

I understand the Cuba angle, but I think way too much time has been spent on it. We needed to see Nucky desperately trying to find a way to be legitimate, and the Bacardi Rum importation deal was his chance. With all of the turmoil in Cuba via the uprisings, it appears the Bacardi deal dried up. If that wasn’t enough, Sally’s murder only seals it. Cuba is done for him. Combine this with Joseph Kennedy Sr. declining to do business with him, and the writers have boxed Nucky into a corner. Maybe there’s no escape from his gangster lifestyle. When he tries to get out, he’s pulled right back in. All the valuable time he could be spending finding a way out of his bootlegging gangster past, is used up preparing to defend himself from Luciano’s ambitions.

Where does that leave Nucky, and who are his friends? It seems like Nucky will have to team up once again with Capone. He’s had Nucky’s back in the past, and it looks like he does again. This may also be a chance for Eli and Nucky to reconcile. The other person who could benefit from an alliance is Dr. Narcisse. He may have the most to lose of the entire bunch, since he’s a direct neighbor to Luciano’s crew. Only through a combined effort can these three ward off Luciano and the Sicilians.

This leaves Chalky, but I can’t see him going in with Luciano’s crew. His is a personal vendetta, and I see him going on more of a Death Wish route and taking vengeance personally on the people he holds responsible for his daughter’s death. I’m not sure how much hostility he holds for Nucky, but first in line would be Dr. Narcisse. 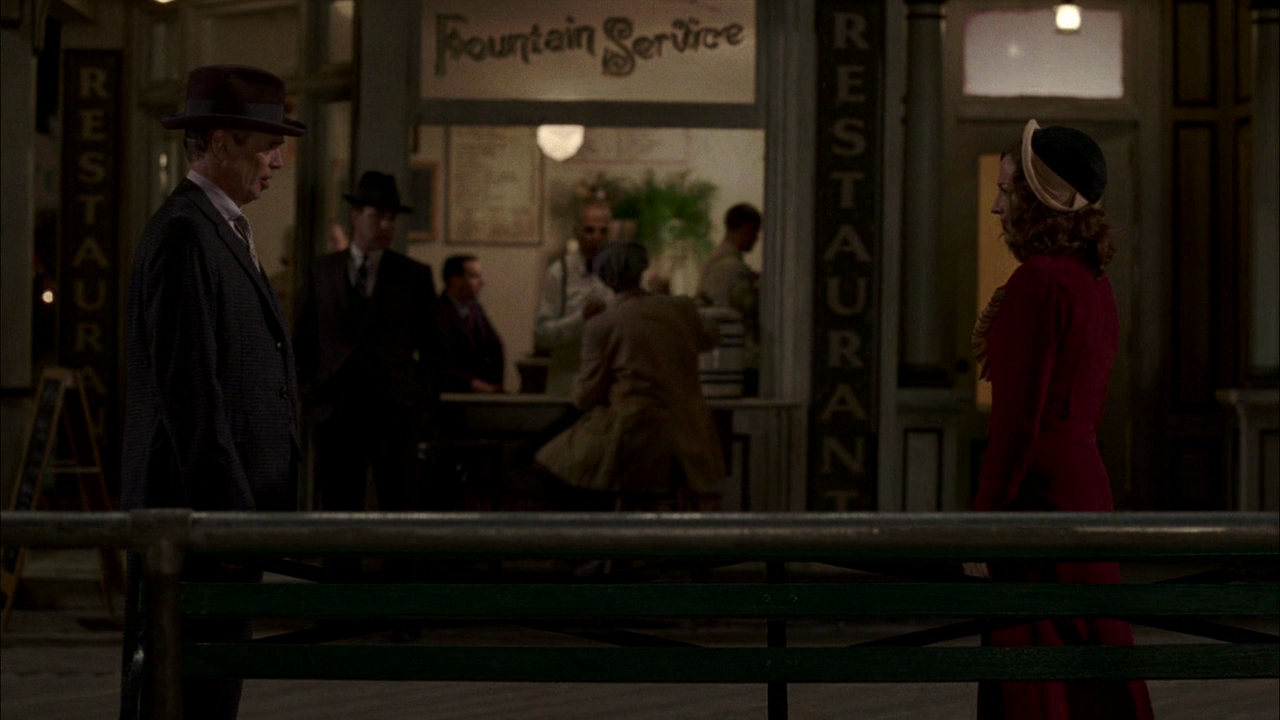 With Margaret back in Nucky’s life, and Sally dead, there may be a chance at reconciliation. It’s obvious from the kiss on the boardwalk that they both have feelings for each other. Will it amount to anything? Is there a way to escape the life they’ve carved out for themselves and live happily ever after? There’s always a chance as long as Margaret doesn’t get caught up in the crossfire of what’s coming.

As for the mystery letter Nucky received, it can only be from Gillian. I have no idea what her angle is. Is she trying to blackmail Nucky? What hand will she have in the endgame of “Boardwalk Empire?” At this point I can’t see how she’d even get out of the asylum she’s trapped in.

The Nucky flashbacks are getting very tiresome. They do paint a picture of how Nucky grew into what he is now. That being said, they do very little to advance the story, and there is an awful lot of time spent on them. What more can they show us about how Nucky evolved? I think we get the idea that between the Commodore and Sheriff Lindsay, he learned all he needed to get to the top. Enough already, one third of every episode seems to be flashbacks, leaving little valuable time to finish up the other story lines in a fulfilling way. Can they wrap it up satisfactorily? Only time will tell.