Well, we made it through our first Comic Con! It’s been a whirlwind of excitement and an exercise in patience. As much as you think you can prepare for your first go around in San Diego, there will inevitably be some surprises, great and small. You make plans and Comic Con laughs in your face (while it also takes your money).

The convention is both exhilarating and exhausting. You think you know what you’re getting yourself into, but as soon as you get there you realize you really have no idea.  Over 100,000 people in one location is a lot, no matter who you are.  And for as much fun as you will have snatching up free stuff in the Exhibition Hall and zip-lining to the Hilton, there will inevitably be some letdowns.  The biggest disappointment of the weekend was missing out on the “Orphan Black” panel. It was held in 6A, which we have to say really should have been held in Ballroom 20, or at least the Indigo Ballroom across the way at the Hilton. The interest in the showing is steadily rising and there were about a hundred (if not more) of us who weren’t able to join the Clone Club, but we were able to commiserate about Tatiana Maslany’s Emmy snub while waiting in line.

This year more than ever the events sprawled far outside of the crowded hallways of San Diego Convention Center proper.  Zachary Levi’s free and interactive Nerd HQ took over Petco Park for the length of SDCC.  “Gotham” and “The Simpsons” took over the lawn on the south side of the center, which we suppose gave the endless Hall H line something to look at while they waited. NBC set up shop at Plaza at 5th below Harbor Boulevard to promote “Constantine,” “Grimm,” and “The Blacklist.” And “The Last Ship” even threw a party onboard a real life battleship: The USS Midway.

The proliferation of off-site events is a trend that we really, really dig.  While the panels are a joy and getting to hear your favorite actors, writers, and showrunners discuss your must-see shows and movies is incredible, the lines to get in are long and there’s rarely a guarantee that you’re going to be able to see what you want.  And even if you do get in, chances are you’re going to be sitting in the way back watching a giant video screen for an hour.  Don’t forget that if you wait in line and don’t get in, you’ve also missed out on the hundred other panels happening at the same time.  Going off-site brings a whole new atmosphere and energy to the Comic Con experience.  While inside the shared experience of lines, shoulder-to-shoulder crowds, and hoping your iPhone battery makes it through the day brings you closer to 130,000 strangers, it can get a little claustrophobic.  Outside under the hot SoCal sun things are a little different.  With crowds on the sidewalks spilling into the streets and pop-up booths set up everywhere you look, it felt much more like a carnival than a convention.  And we love it.

This year interactivity seemed to be the name of the game.  For the third year in a row, Nerd HQ provided an alternative space for people to come and gather for smaller panels and interactive games.  They were also treated to pre-releases video games and an expanded “Conversations for a Cause” panel series.  The small, intimate panels had space for about 300 people and featured nerd royalty such as Nathan Fillion, Joss Whedon, and Seth Green, to name just a very few.  We do have to say that we hope the Conversations panels don’t grow to Hall H or Ballroom 20 capacity.  Despite the rightfully high demand for tickets (which cost an extra $22), there’s something unique and special about the tiny, intimate discussions that can’t be matched anywhere else at Comic Con.

The Walking Dead Escape and the Game of Thrones Experience took the interactivity to a greater level.  TWD Escape, produced by Skybound EXP, was a fan-based experience that operated like a giant zombie obstacle source. Participants signed up to “act” as Walkers or try their luck as Survivors. As solo runners or teams, Survivors ran, crawled, slid, and hid their way through Petco Park, making a series of choices that determined whether or not they’d make it through Quarantine. Although we didn’t participate ourselves, we did watch a horde of participants rush through a wall of Zombified Comic Con goers in full make up. It was a fun and exciting alternative to the usual goings-on in the convention center and we expect that the years to come will see even more of these kinds of big interactive events.

We learned a few things this long weekend that we’ll take with us to next year:

Lesson #1: Don’t over schedule. We tentatively planned on going to five panels a day, plus Nerd HQ, plus the exhibit hall floor…plus fitting in time to eat. Although we did pretty well, turns out our schedule was quite optimistic.  And apparently eating is for the weak.

Lesson #2: The panels are cool but there’s so much more to see. Although Hall H may be the light at the end of the proverbial tunnel – or line, as the case may be – there’s so much fun to be had outside of the convention center that you shouldn’t stay cooped up in there all weekend. Go outside, have fun, see what else is around, and be with your fellow Conners in the San Diego sunshine. (Or rain shower, depending.)

Lesson #3: Just because you get into the panel of your choice, you still may not get the experience you’re looking for. While we were ecstatic to be among the throng inside Hall H for both “The Walking Dead” panel and the “Game of Thrones” panel, because of the massive crowd and the impressive number of people on each panel, some of our favorite cast members only had time to utter a word or two. It’s not that some people were attention hogs, it’s just that once you go down the line of 20 people asking “What’s your favorite scene in the series,” there’s just about time for a teaser trailer and then it’s time to go. On the other hand, the smaller panels do provide a greater amount of insight into the characters and the show, which is a lot of what we’re looking for in the discussions. We already like the shows – the panels are, in our opinion, meant to give us that little bit extra to get is even more excited for the new episodes, or even the premiere of a new show.

Lesson #4: Some people just aren’t very good at panels. We get it. Starring out at a sea of 15,000 faces can be daunting, even for actors whose job it is to entertain, but every year there are people who end up sitting on that raised dais that is the stage who won’t have much to say.  We’re looking at you D. B. Weiss and David Benioff. “The Game of Thrones” executive producers and writers were even more tightlipped than usual about the upcoming season of the fan-favorite HBO show. We’re not asking for them to spill every secret about Westeros, but it would have been nice to get something from them beyond “we can’t talk about it.”

Lesson #5: It’s too big.  That’s the crux of much of Comic Con’s problems.  It’s grown too large. Walking the Exhibition Hall is an exercise is body-checking your fellow con-goers and stepping on toes. It’s hard to see what’s going on and even harder to get to a booth. This is a problem that isn’t going to go away without reducing the number of badges available, which would only drive the exorbitant prices up even more. Expanding the convention to the off-sites events is one way to try and relieve the crush of people, but it does have the effect of beginning to divide Comic Con into two somewhat separate things: the on-site panels and the off-site events.

The final piece of advice we’d offer: go in prepared for the best, but expecting the worst and you’ll come out of the Con with an amazing experience and more than a few stories to tell. (We’re looking at you, Nathan Fillion.)

We really enjoyed our time at Comic Con and can’t wait to see what next year’s Con has in store for us!

And in case you missed anything, or you want to reminisce about our time at Comic Con 2014, check out all our posts here. 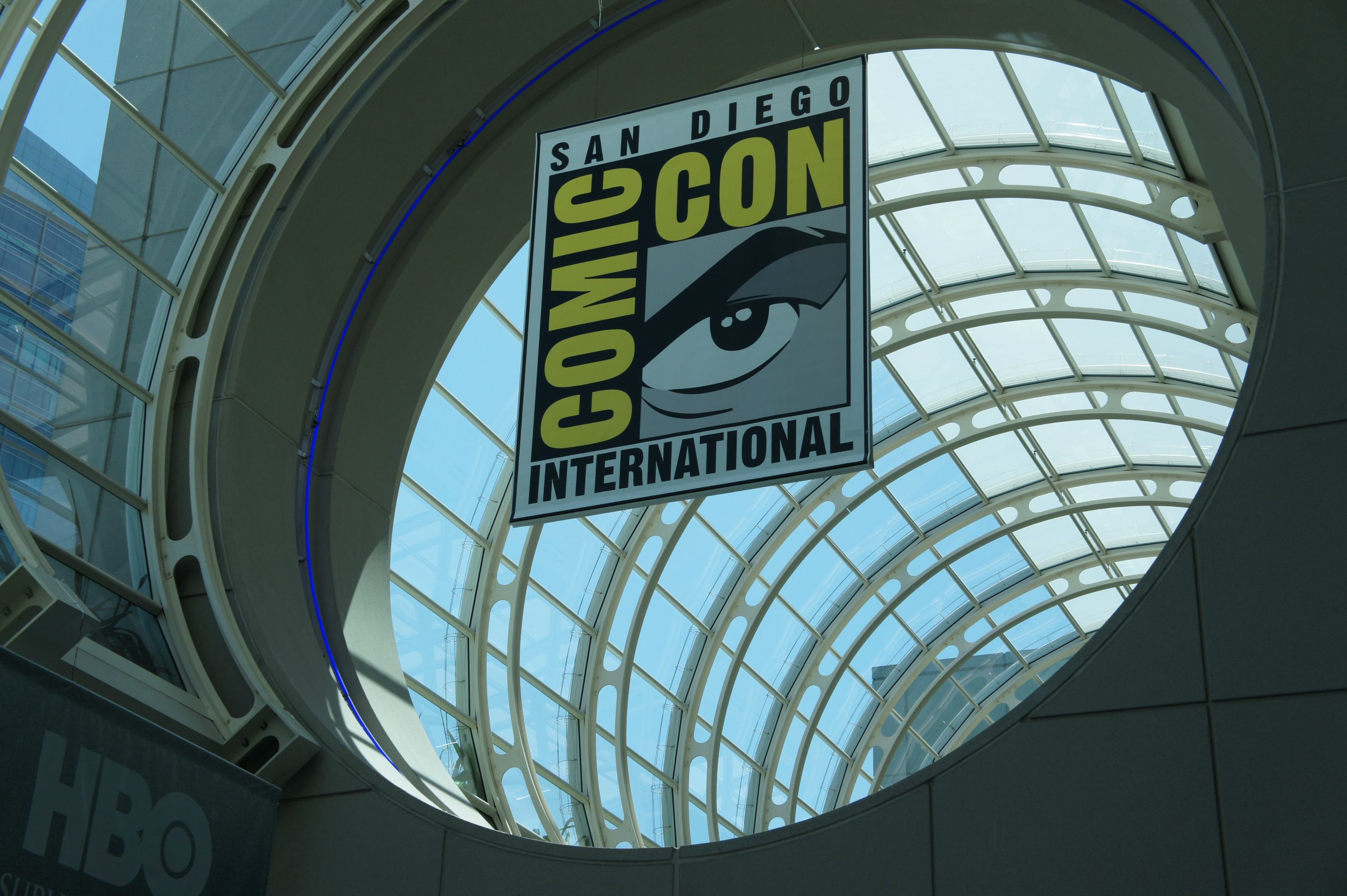