Old habits die hard, as Molly goes back to space for the final episode of EXTANT tonight.

Don’t play favorites: Ethan is noticing how different Molly is acting around her other son, and he brings it up with her. Of course, she can’t answer when he asks why it is different, and he understands. Luckily they know that Odin did something to him, and John will take him back to the lab as Molly gets ready to take off.

Molly gets a prototype to stop anyone from getting into her mind and body, to protect her from anything. Say a prayer, cross your fingers, believe in Molly, because here she goes. Up she goes, and there is no answer from the two in the ship. As we know now, Katie cannot be trusted – where is she? Finally Molly finds Shawn, who is locked up. I kind of like Shawn, as little as we have seen him. Just saying.

Back at home, they analyze Odin’s video. Has he already planned his attack? John wants to shut him down and open him up. This would put other people’s lives at risk – and John won’t take no for an answer, even though everyone else disagrees. What I am still confused about is why he was talking to himself in the last episode…

Watch out Molly, Katie is behind you! Oh, we are back on the ship, by the way. And now back at the lab – Ethan almost presses the phone that Odin gave him, but the three adults in the room try and convince him that they will wake him up and not to press the button that would probably end their lives. Luckily John’s pep talk saves them, and Ethan hands over the phone.

Molly finds Katie, or the Alien Katie, rather. She knows, which is great. Molly tells “Katie” that she should let her through the door since she is still partially the actual Katie – but of course that doesn’t happen and ends in Molly beating up Katie. She runs away and locks Katie in, but did something happen to her in there?

Somehow, Katie can now shape shift into Molly…so that’s confusing. But lucky for technology, he talks to the Molly who came outside. I am not so certain that it’s the actual Molly, though.

Back home, the lab shuts down because it’s been compromised, basically leaving Molly to her own devices, and Ethan is shut down. Shawn isn’t responding. Probably because they have now all been exposed, and they go to plan C.

Back at home, there is a bomb in Ethan, and they need to get somewhere safe, but of course John and the others aren’t leaving. They decide to clear the building to minimize risk. John is visibly upset, and Ethan wakes up, happy to see his dad woke him. It’s a very sad scene, and well done by the two. Almost as if a father is delivering bad news about a son being sick, John has to tell Ethan they need to figure out how to back him up, and although Ethan is just a machine, this scene shows that he is more than that now, he is their son. And a great quote about trust – every now and then you will be disappointed. Luckily we know about the Odin guy now. But is it too late? John can’t answer Ethan when he asks if he will die. So sad!

Where is Shawn? Everything is seemingly back to normal – until Shawn comes after Molly (and a flashback Marcus too). She stabs him with the antidote she is carrying around since he was contaminated by the Spores.

JUST as I was thinking that they should send Ethan in, they make the decision to do so. He is the only one who cannot be manipulated, so they send him in, and John has to stay where it’s safe. The two boys meet face to face in the contaminated lab, and Ethan shuts him away. The boy tries to get into Ethan’s brain, but can’t. That’s probably frustrating. Go save your mom, Ethan! 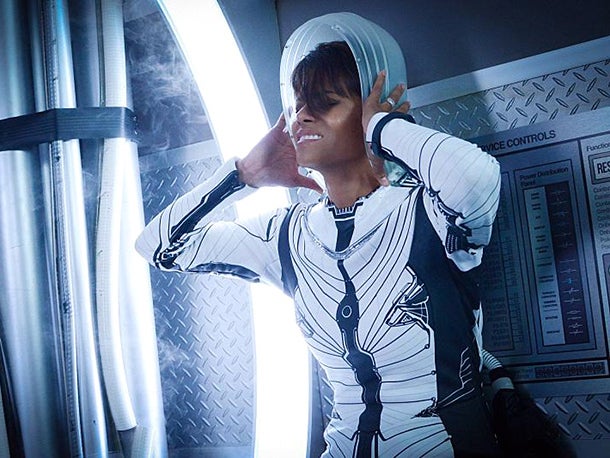 The ship denies Molly the ability to go home, as she has been contaminated, but Ethan overrides. Molly connects with Ethan and tells him to tell John that she loves him. He tells connects her and John.

Okay, probably the most heartbreaking part of the episode. Ethan decides to risk his life for him mom, and heat himself up. He says, “I think that this is my purpose” and does it against his dad and mom’s orders. Alien boy comes and tries to stop Ethan. Ethan allows the ship to launch, but gets attacked by the boy. I have never hoped a machine lives more in my life!

As the bomb in Ethan starts to light up, he tells the alien boy that he needs to run. At the lab, they lose Ethan. What happened? Ethan is gone. As Molly heads back, she realizes what happened. He saved his parents, and possibly the world.

Surprisingly they jump to 5 days later. There is no evidence that he died in the explosion – and Molly believes he may not have. Suddenly Ethan is back – proclaiming he is everywhere. And the Alien child also lived, being picked up by someone on the side of the road.

In the end, the one who was the machine taught the others what it really meant to be human. What did you think of the season finale?