We are nearing the end of this season of Extant. Are you ready for the final two episodes? Lucky for us we are going out with two 2-hour long episodes. Let’s start the beginning of the end (and hope for more seasons to come, of course!):

Flashback: Molly on the ship, which is failing. She desperately tries to fix the problem, donning her oxygen mask. She hits some buttons, and voila, she’s ok and everything returns to normal.

Could have been a scary situation – if it wasn’t just a drill. I thought it seemed too easy.

A very emotional Sparks comes out to tell everyone of his daughters failed mission, and Molly is sympathetic. 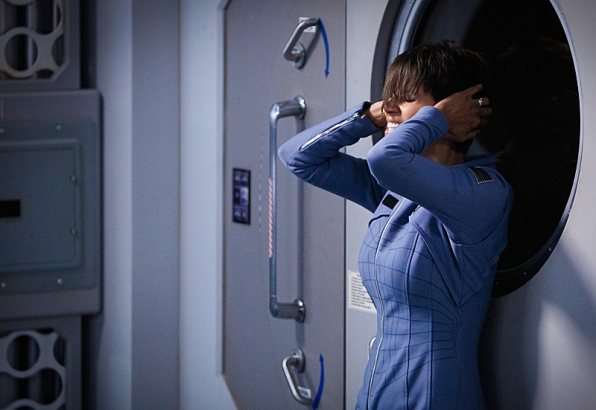 Back to the future: Sam and Molly seem to have rekindled their friendship – and Molly showed her the video that John and her saw last week of Katie’s death. Molly is ready to make Sparks sweat – ready to show him that she is looking and up to something. Nothing to fear, right?

Back to School: It’s not just ‘normal’ kids that are heading back to school, but also the artificial intelligence kids as well. Ethan is nervous for his first day – but John plans to surprise him later to make him feel more ‘normal’ – a bike.

Meanwhile, Harmon is being tortured for answers but isn’t giving up.

At school, two Japanese girls are talking about wanting girl robots when they come out with them, and commenting on how real Ethan looks. He responds to them in Japanese, and John is surprised. The girls apologize, and John admits he didn’t know Ethan could speak it either. First he finds out Ethan has nightmares, and now this! Definitely not father of the year here.

Sparks is fast – he already knows Sam is looking into things, and is curious as to why, even though she can supposedly be trusted now. But who’s side is she really on? 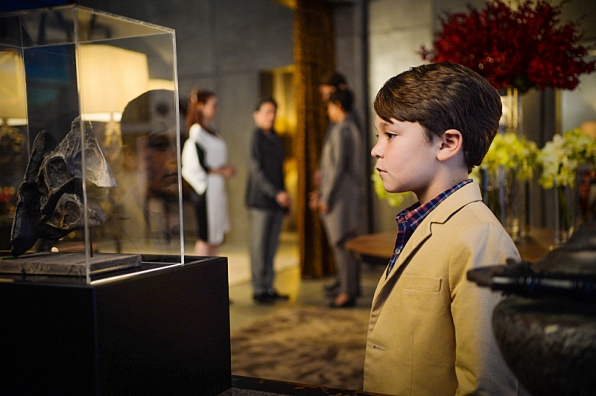 John seems to be feeling a little nervous that Ethan is acting “not human” and that he should know all about Ethan since he created him. The line is being blurred.

Molly sends the symbol she found in Harmon’s place (and that has been everywhere since then) to Derek Pearce, and he tells her to meet him at his apartment at 5 PM. What could that be about?

She’s too late. He is dead before she can find answers – how convenient. And it looks to be a suicide, but Molly doesn’t believe that.

No risk, no reward – she decides to carry on, even if it means putting her family at risk, even though John tries to convince her to stop.

John takes Molly and Ethan to see Mr. Yasumoto. Ethan and him talk Japanese a little. I want them to run away from that man, obviously.

Over to Julie, who is on her date with her new man. He seems to be very interested in Ethan and what is happening. Julie admits to him that the goal is to have Ethan think for himself. Not something you should share on a first date – I don’t know for sure, but I sense there will be ramifications of that for sure.

Molly wants to see the baby so badly that she swears she will find it. She is determined.

And in a move I didn’t think she would do, she goes to Sparks’ home and plays the video of his daughter dying while asking him what kind of father would do this and then cover it all up. Admitting that it was a secret mining mission, and she knows all about it. She wasn’t kidding when she said that she wanted him to know all about her mission. 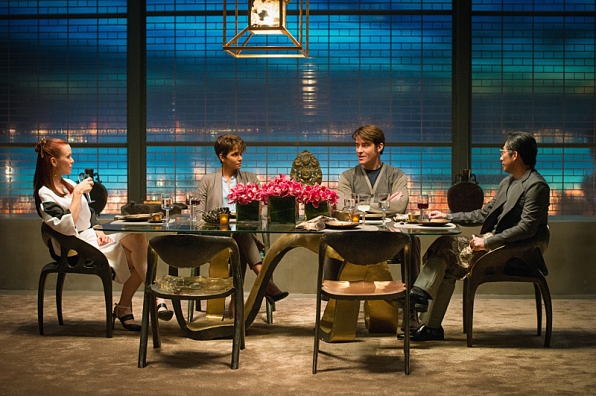 Back at the house, Ethan gets his new bike and wants to go for a ride now, and John caves even though it’s dark.

If there is one gripe I have with the show, it’s the fast cuts to new scenes. I would like them to drag out certain scenes a little more, without having to switch which characters I am focusing on all the time. But I digress.

Julie’s date turns her down when she asks if he wants to come in, and we cut to Ethan riding his bike, he doesn’t need to be taught, he already knows.

John seems upset that he doesn’t need to teach him to bike, again blurring the lines between human and non-human. Ethan disappears for a brief second, and then returns.

I knew Julie’s new boyfriend was digging for information. He is in a group meeting that is against machines. Apparently they believe they have lost their souls against machines. Getting very “Rise against the Machine” in here. He is calling for a reckoning, which is going to start with Ethan.

Back at the lab, Sparks takes Molly’s advice and apologizes to his daughter, who re-appears as a hallucination, and he stays until he gets called in to a security breach, which is Molly digging around to find something. She is now trapped on the 5th floor and they are coming for her. She shouldn’t have told Sparks she was looking around, but it’s too late now.

She is saved, and Harmon is in the getaway car, having talked his way out of death.

Back at the house, John has made up his mind and wants to go in and control Ethan – keeping him as a child for as long as possible (something a lot of parents wish could happen!), but his access to Ethan’s system is denied. Who is controlling Ethan?

Onto part 2 of tonight’s episode. What’s going to happen with Ethan? Will the machines and humans be at war? And will Molly get to her baby?

You are not the mother, you are the hose: Molly finds out everything – including the fact that her baby is a boy, and alive. Is someone else behind Sparks behind this all? They are all wondering this now. Although the baby is an alien, or whatever he is, Molly wants to get him out and save him from the scientists.

John shows up at Julie’s house, thinking she did this to Ethan. Turns out he was very wrong, and leaves after a heated argument.

That ‘other person’ – Yasumoto – has a discussion with Sparks. The operation is at risk, and Sparks tells him that he should eliminate the ‘risk,’ that being Molly. They worry about the consequences of eliminating Molly and the effects it has on Molly. Yasumoto is dying, admittedly. They decide to not harm Molly until the offspring has no use for her. 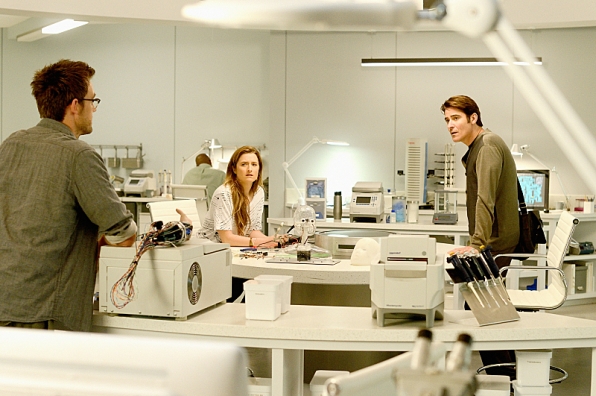 It’s the morning, and Ethan is gone, to the park with his new bike, without his parents permission. Kids these days. He sees two kids blow up what looks like a robot, and then the kids start to bully him, trying to take his bike. They push him down, and he is pushed into the mud as they steal his bike, he rises out of the mud (seriously, very terminator-like) and has a damaged face.

I think it’s interesting what they are doing, showing John’s struggle with keeping his son like a real boy, but also being realistic about what he is. There is a fine line if this were to happen in real life, given how we are with technology and our attachment to it.

We made you so you can find your own function – Julie gives a nice speech to Ethan, trying to tell him that he is special and will find his purpose in life. Ethan is questioning his own existence – he seems to be more human than they think. This is where the blurred line gets even more blurry.

Maggie and her new team are getting ready to ‘hijack’ the baby, until something weird happens and they stop the plan to move the offspring.

Quote of the night is from Harmon – “Let’s just shoot each other here and save them the trouble” – nice to see a little comedic relief amongst all the drama.

Molly needs to see it, and is very adamant about not walking away, and Harmon resists at first, but since he is “already dead” he decides to go with her. Molly leaves a heartbreaking message for John, saying goodbye and that she loves him, and is going in because she just can’t give it up. 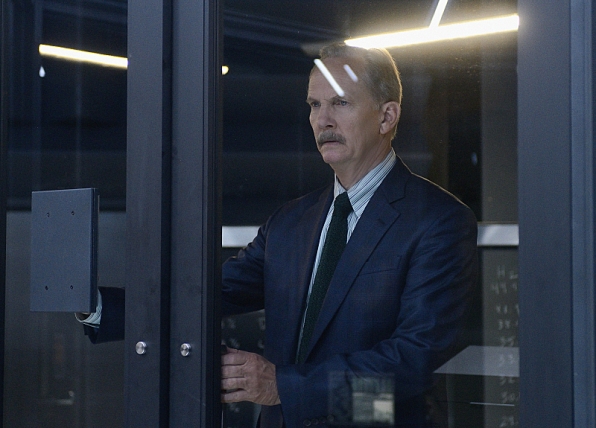 Ethan is angry at his father for telling him no, and overhears his mother’s message to his dad. Julie and her new boyfriend come to watch Ethan as John goes to save Molly. Not a great thing, since this new boy toy wants to eliminate Ethan. We are all screaming don’t leave him!

Molly and Harmon sneak in, but the baby seems to be doing something strange… Something came out and shot everyone, Harmon shoots at the “baby” and they open the box to find it missing.

Sparks comes face to face with Molly, he has a gun, and shocker of the evening, he shoots Molly, but then it looks as if he shot his daughter. Who did he shoot? And what’s with the weird breathing noise we keep hearing? He hallucinates a very alive Katie, who says “he needs our help” and that’s where we end.

A great episode tonight, although I feel like they are putting a lot of information in a short period of time, it was suspenseful and this episode really brought a lot of things to light.

What did you think? Are you ready for the season finale next week?