Tweetable Takeaway: Side-kicks get a chance to shine and the royal besties put their friendship to the test on the season finale of Galavant.  Tweet

Airtime: Sunday at 8/7C on ABC

GALAVANT started off this week on the right foot with a mini-song by Anthony Stewart Head. Gal’s dad puts the ridiculous typical macho mantra of hero-dom in his son’s head at a young age. I still love you Anthony Stewart Head, despite your backwards ways of raising a boy. Basically, conceal, don’t feel and make sure you’re stoic so you can have your majestic moment of heroism without thinking about anyone else. Thanks, Galavant, for turning this trope on its head – Gal is still a self-centered prig, but he’s at least stopped hiding his feelings and instead of taking his opportunity to end the two kings that hold them captive, he heads for the princess of his dreams, with a musical interlude, of course.

Kudos to the writers again, as we’ve got secondary characters that I actually really like, instead of them fading into the background. “Galavant must be helping us from beyond the grave!” Oh Sid, if only I could find a way to Valencia to hug you. Chef and Gwendolyne get their song, the jester is the one who breaks them free of the dungeon (though why he didn’t break himself out before, I can’t tell) and Sid remains my favorite of the heroes with his sweet naïvety. I love the extremely sarcastic King and Queen of Valencia. They are so done with Gal’s heroics, but honestly who wouldn’t be? They’ve been prisoners for ages; I would be pretty done with everyone too. 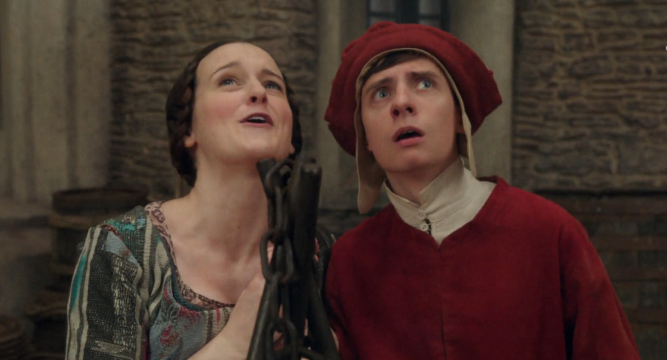 Going back to Chef and Gwendolyne, the dark humor in this show just goes full out in their song. Where else are you going to get cheerful lyrics about the symptoms of cyanide (and rhymes about diarrhea) that still end up being funny? Gross out jokes usually don’t go down well with me, but Gwen and Chef are so cute, I’m ready for them to poison everyone (except maybe Sid), and head off into the mud-caked fields of Valencia to live together until the ripe old age of thirty.

We’re at the end of the first season of Galavant now and I’m sad to see it go, though I think this is the right length for it. Gareth and King Richard are set to fight to the death! I’m ready to fight for them to get their own show. Gareth’s face when King Richard calls him ‘Gare-bear’ is worth the price of admission alone, come on ABC. Alas, their friendship doesn’t get as much screen time here at the end, but Gal and King Richard get their own song and a drunk buddy friendship. I’m happy that they’re set off in a boat together because as much as I want more of Gareth and King Richard, the song between Gal and the king made me want way more time with them together. Maybe Gal needs to be constantly drunk to actually get along with him, but their chemistry is fantastic for being former sworn enemies.

So weirdly, Gareth is kind of the new king now, though I can’t really be upset about it. He did some good turns in this episode and his devotion to King Richard was absolutely, one hundred percent adorable. Well, as adorable as Vinnie Jones can get. I wondered whether his comedy chops would be in good enough form to make me laugh when I read about his casting on this show. There was nothing to worry about – he’s got excellent timing and just enough scariness to make all of his lines fantastic. He’s really surprised me and I look forward to more from him.

Isabella goes to her cousin for help and she’s locked in a literal box to watch out the window as our hero sails away with the “bad” guy. I’m not actually sure why she went in the box in the first place. This part was the only bit that stuck out and while I guess the scene was written to give us some tension for the next season, it felt weird and out of place. She’s gone from one prison to another. It’s especially weird since her friends are all behind her and she’s now just stuck in a box after all the ass-kicking potential they showed for her at the beginning of the series. She turned into an impatient wallflower in the dungeon the last few episodes, waiting only for Gal’s kiss and to be rescued while the rest of the peanut gallery had all the good lines. Hopefully they give her justice when the show returns.

The final song from the Jester cheerfully jokes about there being a season two (maybe), which they certainly left everything on tenterhooks so I hope there is one. I mentioned earlier that I feel like this was the right length for this type of show, so hopefully by the time the show comes back, I’ll not be burnt out on the comedy musical format and they can give us another six to eight episodes of hilarity. I’ve been really pleased with this show overall, maybe not enough for repeat viewings to buy the DVD, but certainly enough to recommend it to my friends and the ultimate sign of loving a show – using gifs from it all over the place.

Some random bits that I loved about this episode but couldn’t fit in up there: