Tweetable Takeaway: This week’s Girl Meets World is painfully earnest, but there are worse things for a kids’ show to be.
Tweet


Airtime: Friday at 8 pm on The Disney Channel
By: Madelyn Glymour, Contributor

Never before has the gulf between me and the 10-year-old target audience of GIRL MEETS WORLD been more evident than in “Girl Meets Flaws.” As an adult reviewer, none of this episode’s dramatic sequences—and there were many dramatic sequences—worked for me on an emotional level. They were just too on the nose. “Flaws” sees Girl Meets World at its most after school special-y: Riley tearfully hugs Farkle after he reveals he’s being picked on; Lucas rather unartfully confronts the friend who, he discovers, is the one bullying Farkle; Riley leads the class in a kind of protest/show of solidarity where everyone writes their own biggest flaw on their forehead; and the bully sadly admits that he was jealous of Farkle’s deep friendships, and writes down his own flaw.

I mean, it’s all so overdramatic, so oversimplified—way too heightened to take seriously. And yet, I can remember, at around 11 or 12, being utterly engrossed by a Boy Meets World episode that was way more melodramatic than anything that happened in “Flaws.” (It was called “Dangerous Secret,” for God’s sake.) I don’t know any 10-year-olds who watch this show, but I imagine that for many of them, the dramatic sequences of tonight’s Girl Meets World episode would work.

Girl Meets World (oddly, for a sequel to a series whose fans are now in their late 20s) is not particularly interested in a periphery demographic. It’s entirely focused on its young audience, and in speaking to them, it is earnest to a fault. That can be off-putting to an adult viewers, but Girl Meets World doesn’t much care about those.

The funny thing is that I don’t think there are a lot of kids’ shows with that kind of earnestness, these days. There used to be a lot of them—Full House, Saved by the Bell, and Family Ties all had famously melodramatic episodes—but the closest analogue I can think of today is Degrassi: The Next Generation. I don’t watch much Disney Channel, but I do catch bits and pieces of Jessie and Dog with a Blog while I’m waiting for Girl Meets World to start, and neither of them seem to carry the kind of serious tone that this show does. (Jessie perhaps slightly more than Dog with a Blog, as the former is about a 23-year-old, and the latter is about a talking dog.)

Obviously, as an adult viewer, I’d prefer that Girl Meets World provide more nuance and realism in all that earnestness, but for better or worse, it does let the show get away with things that most of its Disney Channel cohort couldn’t. A case in point, from tonight’s episode: In one of the final scenes, Riley, trying to convince Farkle’s tormenter Billy to be more accepting of those who are different from him, gets her entire class to write their own perceived worst flaw across their forehead. Riley writes “insecure.” (True, but “compulsive fixer” would be more on point.) Farkle writes “nothing.” (That’s what Billy had called him.) Lucas writes “Mr. Perfect.” (Because the show has yet to come up with a flaw for him.) And then there’s Maya, who writes, simply, “broken.” Is it possible for Maya to be the reincarnation of Shawn Hunter if Shawn’s not dead yet?

It’s melodramatic, to be sure (and so reminiscent of Shawn Hunter that I laughed for a solid minute), but it also clearly represents an internally-felt emotional truth for Maya, who’s one of the show’s most well-defined and fleshed out characters. Maya really does feel that she’s broken, as has been made clear numerous times. The word on her forehead is consistent with both her character and the show’s tone.

It’s not something that Dog with a Blog could do. It’s not even something that one of the more adult-accessible kids’ shows like Adventure Time or Legend of Korra could do. In fact, the only other current show I can think of that has both the earnestness and the pathos to pull off a moment like that is Community. And if you’re surprised to see me comparing Girl Meets World to one of the most critically acclaimed comedies of the past ten years, well, so am I. But Community always has had a glowing core made of sentimentalism and dreadfully sincere speeches, and the more I think about it, the more warranted the comparison seems.

I don’t want to oversell this episode, because like I said, very few of the emotional moments actually connected for me. And the after school special vibe isn’t its only problem. For one thing, it continues Girl Meets World’s habit of drastically changing Farkle’s personality to suit the episode’s lesson. (At one point, Lucas tells Billy that Farkle is “the most loyal person I know.” To which I can only say, have you forgotten the time that he ordered you to fire his supposedly great friends Riley and Maya from the company you all shared?)

For another, Billy-the-Bully’s turnaround at the end wasn’t just cheesy; it was eye-roll-inducing. Girl Meets World has shown, in episodes like “Girl Meets Maya’s Mother,” that stories built around Riley’s compulsive need to fix things sometimes work best when she fails. This is definitely one of those times. The show has already shown us, with Harley Keiner, that people can change; Billy didn’t need to see the light to make that point. 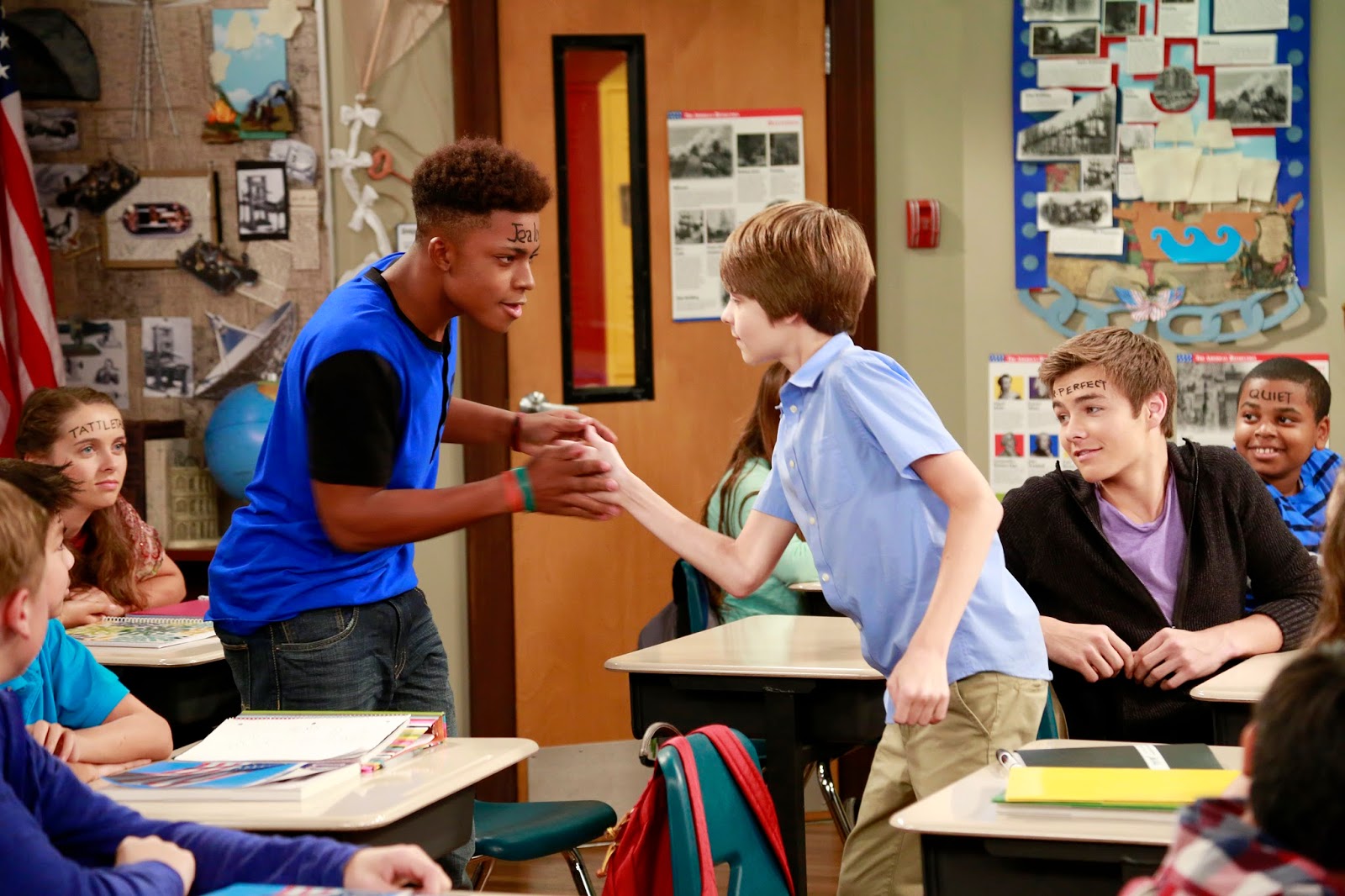 Pictured: An image you can’t see clearly because of all the eye rolling.

And then of course, there’s the fact that Ava was in this episode, and no episode can truly be called “good” if Ava is in it.

But in the end, if this episode has a point (sometimes not clear, on this show), it’s that we should strive to be forgiving of the flaws in others, and in ourselves—that we should, whenever possible, meet violence with resistance, but not with violence. And come to think of it, it’s not a bad point. More than any other that Girl Meets World has made, actually, it’s one I agree with.

So in the spirit of today’s lesson, I’m going overlook some of Girl Meets World’s more obvious flaws. Tonight, I’m going to focus on the positive. So kudos, Girl Meets World, for being stubbornly, infuriatingly, resolutely yourself. You know your audience, and I’m not going to fault you for that.

First of all, the episode opens with two never-remarked-upon in-jokes: Cory announces that Maya and Farkle will be receiving the “Griff Hawkins Totally Cool Award” and the “Joseph T.R. Epstein Confidence Award,” respectively. Griff and Joey, of course, are characters from Boy Meets World (the T.R. stands for “the Rat”). Joey was Harley Keiner’s right-hand man, and Griff was they guy who briefly replaced him as the school bully/bad boy when he got sent off to reform school. Incidentally (actually, not incidentally at all), Griff was played by Adam Scott, who I was just last week asking to see in a cameo on Girl Meets World. You can do it, universe! You can make this happen for me!

As is often the case, I found a lot of this episode genuinely funny, but as is not often the case, Cory got my favorite line, in response to the call center-style answering machine Farkle set up on his desk: “REPRESENTATIVE!” What can I say? I’ve been having a lot of trouble with my cable company lately.

Other flaws from around the class room: “afraid,” “quiet,” “self-centered,” and “tattletale.” Much as I like Tattletale Girl, my favorite is the kid whose forehead said, “I lie.” Oh yeah? Then how do we know you’re not lying about your biggest flaw, hmm?

On a more fittingly earnest note, Cory, in the process of teaching the class about nonviolent resistance and courage, showed the kids pictures of Gandhi, Jackie Robinson, and Malala Yousafzai. Gandhi and Robinson got jokes, but Malala got an entirely serious and straightforward explanation of who she is and what she stands for. This is another one of those things that I don’t think many other kids’ shows could (or anyway, would) do, and I think it’s pretty great. Of note: Riley says that Malala is the youngest person ever to be nominated for a Nobel Peace Prize. That was true when “Flaws” was filmed, but this week, Malala became the youngest person to win a Nobel Peace Prize, which I imagine the writers of Girl Meets World — who clearly deeply respect her — were happy to hear.

Oh, come on. He taught his kids about Malala. Give the guy a break.

Season one, episode 13 – “She Loves Me, She Loves Me Not.” Originally aired January 14, 1994. Look, I could write up a real synopsis for you guys, but all you need to know is that 1) this is the episode where we meet Topanga’s older sister, Nebula Stop-the-War Lawrence, who along with Shawn’s sister Stacy is later erased from the show’s continuity; and 2) this is the episode where Topanga briefly has a crush on Eric. Beyond that, I don’t even know, man. The Topanga-has-a-crush-on-Eric plot was so traumatizing that I barely noticed anything else.