Tweetable Takeaway: It may seem like Girl Meets World is improving, but it’s just a trick of the light — or laugh track, as it may be.
Tweet

Airtime: Friday at 8 pm on The Disney Channel

There’s a curious phenomenon that, so far as I can tell, occurs only in television critics, whereby a critic, after regularly reviewing a mediocre, uneven, or outright bad show for a long enough time, becomes convinced that the show is secretly, in its heart of hearts, a very good show, and that any day now the tides will turn and the upswing will happen. After all, the critic reasons, I’ve spent months and years of my life analyzing this show; there must be something to it. The critic cheerfully tells anyone he meets that the show is better than it sounds, that it’s about to take off. He sees genuine quality in random variations like butterflies in Rorschach blots.

I affectionately (and with the greatest respect and admiration) call it Todd Van Der Werff Syndrome, and I think I have it. Van Der Werff is a world-class TV critic who, in his time at the AV Club, championed Glee and Mom, two shows that, though they may have the seeds of quality, though they may be fascinating in their successes and failures, probably don’t need champions. My disease is Girl Meets World. How do I know I’m afflicted? When I finished “Girl Meets Game Night,” my first thought wasn’t, “This episode had too many metaphors, and none of them made sense,” or “Who would’ve thought that Farkle and Ava could get more annoying?” or “NEVER BE META AGAIN.” No, my first thought was, “They played with the episode structure. Progress!”

The thing is, there are good things about Girl Meets World. Any given episode is likely to have some good dialogue, some good acting, and once in a blue moon, something approaching a good story. From time to time, there’s even a whole good episode, or at least 75 percent of one. But it’s not — and likely never will be — progress. There’s no appreciable difference in the ratio of good episodes to bad episodes now from the beginning of the season. A coincidental string of episodes set outside of school — always Girl Meets World‘s weakest arena — as well as the introduction of Shawn in the Christmas episode and promises from the writers that from here on out, the series will feature more appearances from original series actors and more attention to long-term character arcs, made it seem like maybe, Girl Meets World was really improving this time. But the kids are back in school now, and will always return there. And though appearances by Eric and Mr. Feeny are welcome, and will of course make me more excited about the show, they’re not going to fix the problems that have consistently plagued it: undercooked stakes; a tendency to cut out episodes’ second acts by skipping straight from “problem” to “resolution” without including any of that pesky “trying and failing” part in the middle; the constant, tedious moralistic speeches that stand in for any real learning. I suppose bringing in a few more recurring characters could decrease the screen time available for perennial drags like Farkle and Ava, but I’ve seen no evidence of it yet; both of them were at full annoyance in “Game Night,” despite the presence of Baby Josh.

So this week, let’s not look for any ways that this episode reflects on the show as a whole, or any indications it might have of direction going forward, because there’s no evidence that it reflects or indicates anything at all. For once, I’m just going to list what worked and what didn’t, and leave it at that. (Ha!)

What worked, to keep it short, was Maya, Lucas, and Topanga. Maya is always a highlight of this show, the character who’s consistently funniest and most dramatic, and often the only character for whom a given episode has anything resembling real stakes. True to form, in “Game Night,” she’s the only character who pursues anything unrelated to the central board game, attempting by hook or by crook to seduce Baby Josh. Though, as you can probably tell by the fact that I call him Baby Josh, I find Maya’s crush on Cory’s little brother unsettling on some soul-deep level, she is at least funny about it. And when Baby Josh shoots her down, Maya experiences the only real-world consequences to be found in the entire episode. Lucas and Topanga, on the other hand, were just at their most amusing. Lucas is kind of a hit-or-miss character, and though Topanga is always wonderful, she sometimes seems to disappear from the show entirely; “Game Night,” for one reason or another, showcased them both at the top of their form. The other reasonably successful element of the episode was the use of The Family Game to mirror the internal conflict in Cory’s (and later Topanga’s) relationship with Riley. It was on-the-nose, of course, and it didn’t entirely work (we’ll get there in a moment), but when that aspect of the episode was on, it was genuinely amusing, if low-stakes. The best moment, undoubtedly, was when Riley abandoned her partnership with Topanga to team up with Maya, which perfectly matched up in-game and out-of-game conflicts, and provided a real, small consequence for Riley’s decision to invite friends to Family Game Night.

What didn’t work was, well, everything else. Farkle and Ava were grating; Cory’s neuroses leaned more towards tedious and rude than endearing and amusing; and the in-game/out-of-game match-up started to fall apart after Riley decided to make the group play “the long game” and the whole thing descended into some kind of indescribable glowing madness. Unquestionably the lowlight of the episode, however, was the history class subplot. As I mentioned above, Girl Meets World played with its structure tonight by having the events of Cory’s American Revolution history lesson play out in flashback, while characters referenced them to make points about their situation in the present. I appreciate the effort, and it might even have worked, had the history lesson plotline been remotely interesting. Alas, it seems to have been mostly shoehorned in as an excuse to get the kids to wear funny costumes. And honestly, the entire A-plot of the episode was built around an on-the-nose metaphor for family togetherness; it really didn’t need another one.

These were the successes and failures of “Game Night.” They’re pretty much in line with what Girl Meets World has done for the previous 16 episodes, to greater or lesser degree, and I imagine that the season’s remaining four episodes will continue in the same vein, with one or two slightly stand-out episodes, and just as many clunkers. But I’m a TVDWS sufferer, and hope springs eternal. By next week’s episode (which features Shawn again!), I’m sure I’ll be back to swearing there’s a really good show hidden inside of this, if you only hold your breath and wait. 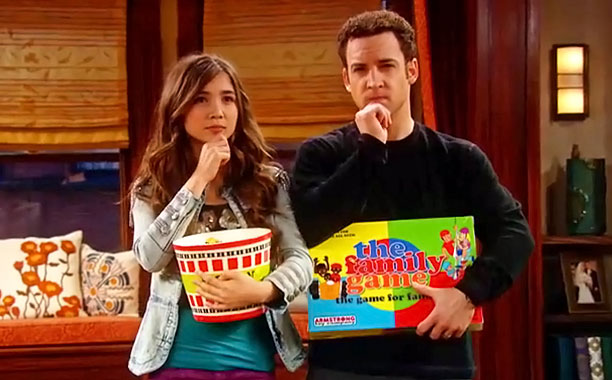 And with this, I believe the show has finally aired all of the clips used in the opening credits.

– How to ruin a really excellent blink-and-you’ll-miss-it in-joke: Comment on it, at length, out of nowhere, straight into the fourth wall. Damn it, Girl Meets World, I really liked the John Adams/John Quincy Adams Middle School thing!

– I find that I like Lucas best when he’s reacting to other characters in amusing ways. Usually, that means that I like him when he’s killing Maya with kindness. Tonight, it meant I liked him because he was the sole sensible person trying to pull a Jim and Pam and get the hell out of there.

– Cory tells Riley at the end of the episode that she’s made good choices in friends, while pointing to a group of people that includes Farkle Minkus. I’m here to tell you: Friends don’t let friends choose Farkle.

– Wait, so, in the pilot, Riley was 12. Then, in “Home for the Holidays,” Shawn says that Riley is 13, and that her birthday is December 8. And now, Riley is apparently 12 again? Is time going backward?

– “These are Riley’s friends, Dr. Turtleneck and Mr. Howdy.”

– “According to the game, we get your daughter.”

Well, quite apart from the fact that when we last saw Cory’s class, they were studying, um, I think the Great Depression was the last coherent lesson we saw out of them, and they’ve somehow segued from that into the American Revolution, there’s the fact that this was a terrible, terrible lesson about the American Revolution. One student asks whether England could’ve done anything to keep the colonies in the empire, and instead of seizing the excellent opportunity to, you know, teach history, Cory blathers about how countries are like families and sometimes you just need someone to be sensible to keep the thing together. Here’s the difference between Cory and Mr. Feeny: Mr. Feeny would have given the “countries are like families” speech, for sure. But he damn well would have prefaced it with a sentence or two about taxation without representation.

Season one, episode 17 – “The Fugitive.” Originally aired February 25, 1994. When Shawn takes rule-breaking a bit too far by throwing a cherry bomb into a mailbox, he asks Cory for help hiding from his parents. A bored Cory agrees happily, but he and Shawn both come to realize that their actions may be a betrayal of their friendship. Oh man, you guys, I’ve been waiting to rewatch this one for weeks. It’s kind of a Boy Meets World classic, up there with “This Little Piggy” and “The Eskimo” and other episodes that are entirely about Shawn. On rewatch, I can totally see why. “The Fugitive” is kind of a big step for Boy Meets World, between the kind of show it was for most of the first season and the kind of show it would eventually become. It focused on Shawn more than any previous episode had, which would of course be a hallmark of the series; it had a kind of heightened quality to its storytelling that would show up again and again, especially in later seasons; and it was funny as hell. It’s just a really solid, enjoyable episode of television, even if the adults in it do put way to much trust in twelve-year-olds to figure out the right thing for themselves.