Tweetable Takeaway: Girl Meets World is a lot like its parent show, but it can’t measure up.
Tweet

Airtime: Friday at 8 pm on The Disney Channel

Here’s what happened. I watched tonight’s episode with my sister. Afterward, in an attempt to prove to me that Boy Meets World could be really weird in later seasons (something that, trust me, I was already very aware of), my sister sought out a seventh-season episode that she remembered in which Eric had PTSD-style flashbacks to Topanga beating him up so that she could take his apartment. (I’d say it makes sense in context, but it really doesn’t.) The episode turned out to be 7×03, “Angela’s Men,” and by random happenstance, its A-plot was a direct parallel to “Master Plan”: in “Master Plan,” Shawn stops into town on Maya’s birthday, bringing into sharp relief both Maya’s and Shawn’s massive abandonment issues; in “Angela’s Men,” Angela’s father stops into town, raising the specter of Shawn and Angela’s massive abandonment issues. Both episodes concern themselves with the difference between people who leave and people who get left behind, couched in almost exactly those terms.

It’s not really random happenstance, though. If you picked an episode of Boy Meets World‘s final four seasons at random, you’d have better than even odds of finding one with more-or-less that theme, because Shawn’s abandonment issues were omnipresent. That’s what makes “Master Plan” so illuminating; it finds the Girl Meets World creative team playing exactly in their wheelhouse, and provides direct points of comparison that show why it’s weaker than its Boy Meets World counterparts.

Because make no mistake: “Master Plan” is a weaker episode of television than “Angela’s Men.” Both of them have their faults — high melodrama and slightly strange gender politics being two that they share — but while the charms of “Angela’s Men” more than make up for the rough patches, the same is not true of “Master Plan.” Or at least, it’s not as true. If I’m counting right, these are the things that Girl Meets World has working against it: an uneven cast; patchy continuity; and an inability to clearly delineate its comedic and dramatic elements.

Let’s take these one at a time. First, the uneven cast. By season seven, the cast of Boy Meets World was carrying very little dead weight. Every character might not play a big role in every episode, but everyone could be counted on to get a laugh when an episode needed them to be funny, and to inspire pathos when the show needed them to be dramatic. And no one was ever in an episode for no reason. (Jack and Rachel, for instance, largely background players in “Angela’s Men,” are mostly only there because circumstances require that they be hanging around, and they’re both good for a few funny reaction shots.) Contrast Girl Meets World, which shoehorns Lucas and Farkle into an episode that has no call for them, either for the sake of realism (there’s no particular reason either of them should have to be at Riley’s apartment) or for the sake of the plot. Lucas, at least, contributes to the master plan by lassoing Maya, but Farkle never even does that much — Riley and Cory’s master plan never calls upon his technical skills, so literally the only thing Farkle does in the episode is wander around with his Stalker Smart Watch. This is not to cast aspersions on the actors on Girl Meets World, who range from perfectly acceptable to very good. Their material, however, ranges far wider.

Second, continuity. Boy Meets World was never the height of serialization — it’s perfectly possible for a newcomer to watch most late-season episodes, including “Angela’s Men,” and understand 80 percent of what’s happening. But although Angela’s father was introduced in the episode for the first time, and Angela’s particular abandonment issues had never been laid out before, a kind of general picture of Angela’s foibles had been building gradually since the beginning of season six. Girl Meets World is trying for that kind of continuity, but it only has Rider Strong for two episodes this season, so it’s almost impossible to build up a convincing father/daughter relationship between Shawn and Maya. Instead, the show has twice now had Riley and Cory scheme to create that relationship for them. The parallels between Shawn and Maya are obvious, and the actors do have a kind of familial chemistry, but a relationship like that is never really going to work unless we can see it grow. Consider Mr. Turner on Boy Meets World. Anthony Tyler Quinn was a series regular in season three, and featured in nearly every episode, so we got to watch Shawn and Mr. Turner step on each other’s toes. Their relationship felt real and organic; Shawn and Maya’s feels like someone really wanted Shawn and Maya to have a relationship.

To say nothing of the incipient romance between Shawn and Maya’s mom.

Finally, the line between comedy and drama. “Angela’s Men” has its share of incredible absurdist humor, in the aforementioned Eric plotline. But although Eric’s B-plot occasionally bounces off of Shawn and Angela’s A-plot, the humor is never about Shawn or Angela’s issues. Boy Meets World erects a solid wall between the funny plot and the dramatic plot. That was pretty much par for the course on Boy Meets World, although there were a few episodes (“The Eskimo,” “This Little Piggy”) where a funny A-plot underwent a tonal shift in the third act. With the exception of a few dream sequence episodes, the show never addressed pathos with absurdity. “Master Plan,” on the other hand, swings back and forth between an over-the-top heist movie pastiche, Lucas lassoing Maya to Riley’s bed, and Shawn’s heartfelt declarations about the hardships of abandonment. All three of these things are part of the same plotline; the heist movie pastiche and the lasso are being used to fix the abandonment issues, and it just doesn’t work. The show wants me to take Shawn and Maya’s emotional trauma seriously, and I do, because their issues are serious, and both actors are very good at pathos. Having accepted that, though, I’m never going to buy into the heist movie — not in this context, anyway.

It doesn’t help, of course, that Girl Meets World‘s humor isn’t quite as good as Boy Meets World‘s. Don’t get me wrong, it’s often funny; I spend a good chunk of most episodes laughing. But there’s nothing that touches the kind of absurdist humor of “Angela’s Men,” let alone original series highlights like “Eric Hollywood.” And Girl Meets World has more misses; in particular, Farkle seems to be, at least in part, an attempt to infuse the show with an Eric-like flavor, but he’s just not funny. His segments in “Master Plan” were dead air. (Maybe this would be different if I were a member of the show’s target audience, but God, if you have a property with the inherent nostalgia value of Girl Meets World, you’d think you’d try to make your humor appeal to adults, too.) 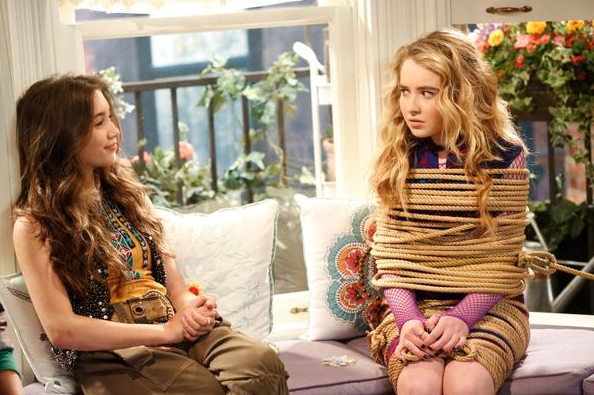 This might change. The Disney Channel has experimented with serialization on shows like Hannah Montana and Jessie, and Girl Meets World is certainly moving in that direction. Shawn’s set to appear in at least one episode next season, along with Eric and Mr. Feeny, which will definitely encourage continuity, and might even bring a little more of the original series’ sensibility to the show.

We’re probably stuck with Farkle, though.

– “Happy birthday. Everything you think is wrong.” From context to delivery, this is hands down my favorite line Girl Meets World has yet produced. It’s up there with Avatar: The Last Airbender‘s “That cute little baby grew up to be a monster — and the worst father in the history of fathers,” for my favorite melodramatic kids’ show line of all time.

– Things that will always amuse me: Maya getting revenge on people. Maya taking pleasure in others’ pain. Maya generally.

– Speaking of continuity, this episode actually had a lot of it. In addition to the camping trip that was planned in “Home for the Holidays” and then referenced tonight, there was Maya’s birthday locket, which was almost certainly an unremarked-upon callback to Maya’s subplot in “Girl Meets the Truth.”

– Maya and Riley’s friendship rings were cute. Those two really do have a nice interplay, good for both drama and comedy. I was glad that Maya didn’t let Riley off the hook for her meddling.

– Riley’s Age Update: Okay, so when the show started, Riley was 12. And then in “Home for the Holidays,” which took place on or around December 25, Shawn said she was 13, and that her birthday is December 8. Then last week, in “Game Night,” Cory said she was 12. Again. Somehow. And now tonight, Maya’s turning 14, and when Riley asks her how it feels, Maya tells her she’ll know soon enough, because she’s turning 14 soon. And it can’t be because the episodes aired out of order, because these are probably the first three episodes of Girl Meets World that could not possibly have been aired out of order; “Game Night” and “Master Plan” both have to air after “Home for the Holidays,” because both of them continue plotlines that started in that episode. You guys, I’m all for serialization, but if you’re going to serialize, you probably shouldn’t contradict yourself three times in three episodes.

– I didn’t really get into it in the review proper, but the specter of Angela loomed large over “Master Plan”; Topanga and Cory even told the story of how the two met. Riley and Maya quickly come to the conclusion that, since Shawn fell for Angela because of the contents of her purse, he was probably in love with the idea of her, and not the reality of her. That may have been true initially, but Shawn and Angela were together off and on for two and a half seasons, and it seems sad and inaccurate to dismiss all of that turmoil as the result of Shawn idealizing her. Shawn and Angela didn’t work because they were damaged in similar but ultimately incompatible ways, and you have to wonder whether, on a more grown-up version of Girl Meets World, the same would be true of Shawn and Katie.

– “Angela’s Men” also has the absolute funniest moment in all of Boy Meets World history, a scene so hysterical that they were literally unable to get through a single take without laughing. You should watch it.

– Credit where credit’s due: I watched this episode with my sister, who helped me untangle many of my very complex thoughts, and pointed out some things that I had missed or simply not thought of. Without her, I would probably still be staring at the screen, saying “What was that?” over and over.

Season one, episode 18 – “It’s a Wonderful Night.” Originally aired March 11, 1994. When Amy and Alan go out for the night, Cory and Eric both use the opportunity to try to pull one over on their parents — but both of them have to deal with the consequences when their schemes are uncovered. I don’t know if this episode was worse than “Master Plan,” but it was definitely less interesting. Upon reading the description, I was surprised to realize that this episode, sandwiched in between the classic “The Fugitive” and the memorable “Kid Gloves” and “The Play’s the Thing,” didn’t ring any bells for me. After watching, I understand why; it was so boring, I forgot all about it.