Yes, GIRL MEETS WORLD, yes! This is what I always wanted from you! This is what I always knew you could be! In “Girl Meets Maya’s Mother,” Cory does not do a single insufferable thing. The storyline has clear emotional stakes. There is continuity of characterization. The plot is not wrapped up in a moralizing speech. I laughed! I cried! It was better than Cats! Maybe I’m overselling it, but it really is almost like watching a different show. One where Minkus is there, for some reason.

Okay, okay, let’s back up. “Maya’s Mother” is built around two events: Career Day, and the school art show. When Maya, who as established in “Girl Meets Boy” is quite good at art, refuses to display her work in the art show, Riley doesn’t understand why. After Maya’s mother misses Career Day, Maya explains to Riley that, unlike Riley, she doesn’t expect good things to happen. She didn’t expect her mother to show up at Career Day, she doesn’t expect her to show up at the art show, and she doesn’t expect people to like her work–and so she’s never disappointed. Riley, being the daughter of Cory and Topanga, naturally decides that this is something she must fix.

She fails. Oh, not completely–by way overstepping her bounds and entering Maya’s work into the show for her, Riley eventually convinces her friend that good things can happen, and are worth expecting. But she never does manage to convince Maya’s mom to show up. Maya’s relationship with her mother is complicated and fraught. Maya is simultaneously ashamed of her mother, desperate for her mother’s attention, and stubbornly resigned to the idea that her mother will disappoint her. Meanwhile, Maya’s mom loves her daughter, wants what’s best for her, and is utterly convinced that not being there is what’s best for her. It’s a mess caused by anger, self-loathing, and years and years of mistakes, and it’s not fixable. Not in a night, anyway. 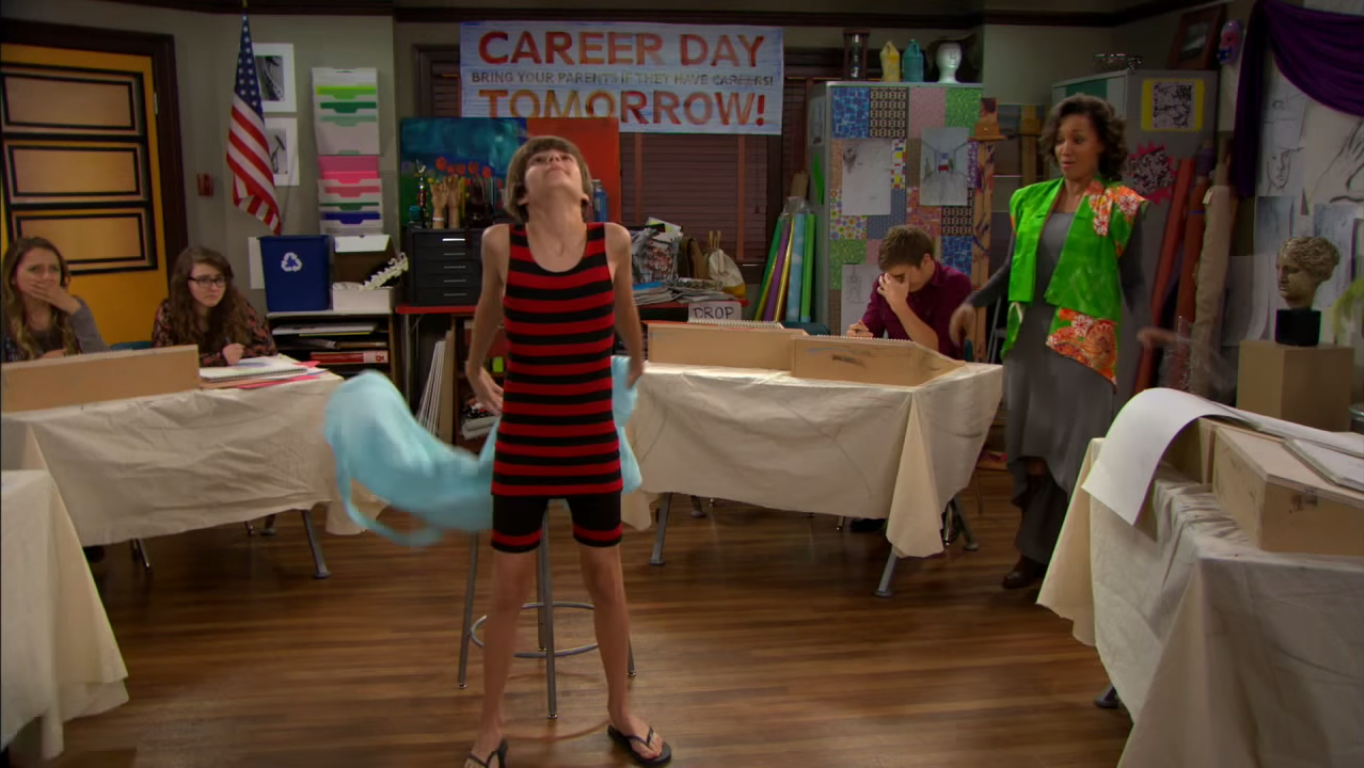 Pictured: A class that is not history, taught by a teacher who is not Cory. (Source: girlmeetsworld.wikia.com)

There’s a secondary theme, about Riley’s search for what talent she might have, that never quite crystallizes. The show tries to make it dovetail with Maya’s arc by having Riley realize that stubbornness and a determination to do what’s best for friends and family is the talent that she got from her parents. I’m not sure the episode was entirely successful at melding the two themes, but honestly, if Cory and Topanga were going to pass on any trait to their offspring, it would be meddlesomeness and an incurable drive to fix things. It fits with Riley’s previous characterization, and ultimately really sells me on the idea that she’s Cory and Topanga’s child.

Which is good, because t’s the characterization that makes “Maya’s Mother.” Sure, it’s funny, probably the funniest episode the show has yet produced. And it has the nostalgia factor, in the form of a cameo from Minkus (Lee Norris). But far more importantly, it has interesting things to say about its characters, and interesting ways of saying them. Look at Maya’s conversation with her mother after the disastrous Career Day showing. The easy and obvious way to show what’s going on in that scene would be to have Maya throw a fit and complain about her mother embarrassing her. But it wouldn’t have fit with Maya’s character; Maya is very invested in not caring about her reputation, and is, in general, a little older than her years. She’s not the type to storm off in a huff. So instead, we see Maya saying one thing and feeling another. She says she’s not embarrassed, she says, “I love you,” but the clear message is that her mother’s actions have made her uncomfortable.

“Maya’s Mother” also allows the characters to be wrong. Riley oversteps a boundary when she enters Maya’s work into the art show, and though ultimately it ends up being a good thing, the show makes it clear–through Maya’s anger and through Riley’s own admission–that she was, to some degree, in the wrong. And, critically, the episode allows the characters to fail. Riley can’t fix Maya’s relationship with her mother. Maya’s mom doesn’t show up. It was absolutely the place the episode needed to go, but when the second act break rolled around, and Riley was waiting to see if Maya’s mother would arrive, I was afraid that the show would’t go there. I was afraid that Maya’s mom would show up at the art show in a last-minute turn-around, because up until now, that’s the kind of show that Girl Meets World has been: One where problems are solved neatly, generally with a speech from Riley about what she’s learned this week. Not this week, though. This week, Girl Meets World found some nuance. This week, the world is messy, relationships are complicated, and there is no easy answer.

Seriously! Outside of the main plot, there were a few scenes where I had almost no idea what was happening, but I was having so much fun watching that I didn’t care. The dinner scene with the Matthews family, where Riley tries to figure out what talents she might have inherited from her parents, did more to sell me on this show as a sequel to Boy Meets World than the past six episodes combined. Cory’s mashed potatoes speech alone is worth the price of admission. (He starts out asking for mashed potatoes, and ends with a stern warning to never try to be mashed potatoes, because mashed potatoes are better at it than you are. It’s the kind of surreal logical leap that only Cory could make.)

Then there’s Minkus, whose cameo appearance is pretty much inconsequential to the plot, but is actually surprisingly enjoyable. The weird, retconned romantic rivalry between him and Cory was, well, weird, but the show quickly disposed of that and instead focused on his and Topanga’s academic rivalry, which was much better. “Between the two of us, Riley and I have 1260 A’s!”

There’s the running theme of people making fun of Lucas’ good looks: “Nobody looks like that.” There’s Maya telling Riley that she has an obsessive need to fix things, and Riley responding by reaching out to straighten Maya’s jacket. There’s Riley and Maya starting a paint fight in art class (long story), and Lucas and Farkle looking at each other and bolting.

Cory failed in very few ways this week! Sure, he allowed Career Day to disintegrate into his 15-year high school reunion, and then let Maya’s mother show up a day late, and then let Maya and Riley walk out of class (again, seriously?), but it’s Career Day. No one’s listening anyway, so who cares? Although, “Maya’s Mother” did give us this exchange, which I think perfectly sums up Cory’s approach to his curriculum:

Cory: The Korean War.
Farkle: Genghis Khan.
Cory: What?
Farkle: I just wanted to see what would happen.

Season one, episode 7 – “Grandma Was a Rolling Stone.” Originally aired November 12, 1993. Cory is excited when his grandmother comes into town unexpectedly and promises to take him to get a rare Cal Ripken baseball card signed by the man himself. But when his grandma flakes on the big day, Cory learns something about his father and grandmother’s relationship. Meanwhile, Eric uses Morgan to get a date with Mr. Feeny’s niece (played by a pre-“Felicity” Keri Russell). Oh, this is another sweet episode about the complexities of parent-child relationships. Actually, comparing it to “Maya’s Mother” (and to later stories Boy Meets World told about Shawn’s relationship with his father, which is similar in many ways to Maya’s with her mother), you can get an idea of what showrunners Michael Jacobs and April Kelly are interested in when it comes to parents and children. There are running themes throughout all of Boy Meets World, and even through the first seven episodes of Girl Meets World, about parents who love and want the best for their children, but are either unwilling or unable to be there for them. Jacobs and Kelly seem to be interested in the ways that parents can fail their children without trying–and the ways that they can unexpectedly succeed. It’s rich territory for drama, and it’s one of the areas where both Boy Meets World and Girl Meets World have done well.