In some alternate universe, there is a version of GIRL MEETS WORLD that airs on ABC Family. Or as an Amazon Original series. In that universe, Farkle probably doesn’t exist–or at least, exists as a much toned-down version of himself. The internal logic of the world is probably more consistent, i.e., students don’t have very loud conversations in the middle of class that somehow go unnoticed by the teacher, and 11-year-old girls can’t brazenly switch out the words to be spelled in a major spelling bee just to prove a point to their friend. Cory probably teaches history, rather than, um, whatever it is he teaches now. And Riley and Maya almost certainly wear saner clothing.

But Girl Meets World doesn’t air on ABC Family, or Amazon, or even Nickelodeon. It airs on The Disney Channel. And this, right here? I think this is about as good as Girl Meets World can be while that’s true.

Well, half of it is, anyway. In the A-plot of “Girl Meets Popular,” Riley decides to give up her current style for geek chic after she realizes that, though she’s unpopular relative to the general seventh-grade population, she’s really popular among the unpopular kids. In the B-plot, Topanga must choose between her friendship with the owner of a local Ukrainian bakery (played, in the show’s first real stunt casting, by Cloris Leachman) and her law firm, which is trying to shut the bakery down so that a higher-rent-paying company can move in. The A-plot has a major weakness, which I’ll get to in a moment, but Topanga’s plot was about as successful a story as the show’s ever done. For one thing, it gave Topanga something to do, which has been one of my major problems with this show from the start. And it had excellent guest stars–besides Leachman, White Collar‘s Willie Garson showed up as Topanga’s slimy, amoral coworker. And it played heavily on my nostalgia, going so far as to play a clip of the original Boy Meets World episode in which Cory and Topanga met. But it was also just solid storytelling. Broad? Yes. Unsubtle? Of course. But that was a foregone conclusion, from the moment the show landed on The Disney Channel; you can’t fault Girl Meets World for being the kind of show it is. And within that framework, it manages to present Topanga with a reasonably difficult problem, and to use her choice of solution to say something interesting and in-character about her.

As I said, the A-plot didn’t do quite so well. The problem is that there didn’t seem to be much actual conflict in Riley’s storyline. Okay, so she decides to dress up and enter a spelling bee to impress her new friends. So what? Kids experiment with their style and interests all the time. And your clothes are far from the most important thing about you. It’s not like Riley stopped being Maya’s friend, or stopped being kind, or stopped being… whatever else Riley is. Maya is very concerned that she’s losing Riley, and she and Topanga spent the episode convincing Riley to start being herself again, but I’m not sure she ever stopped. 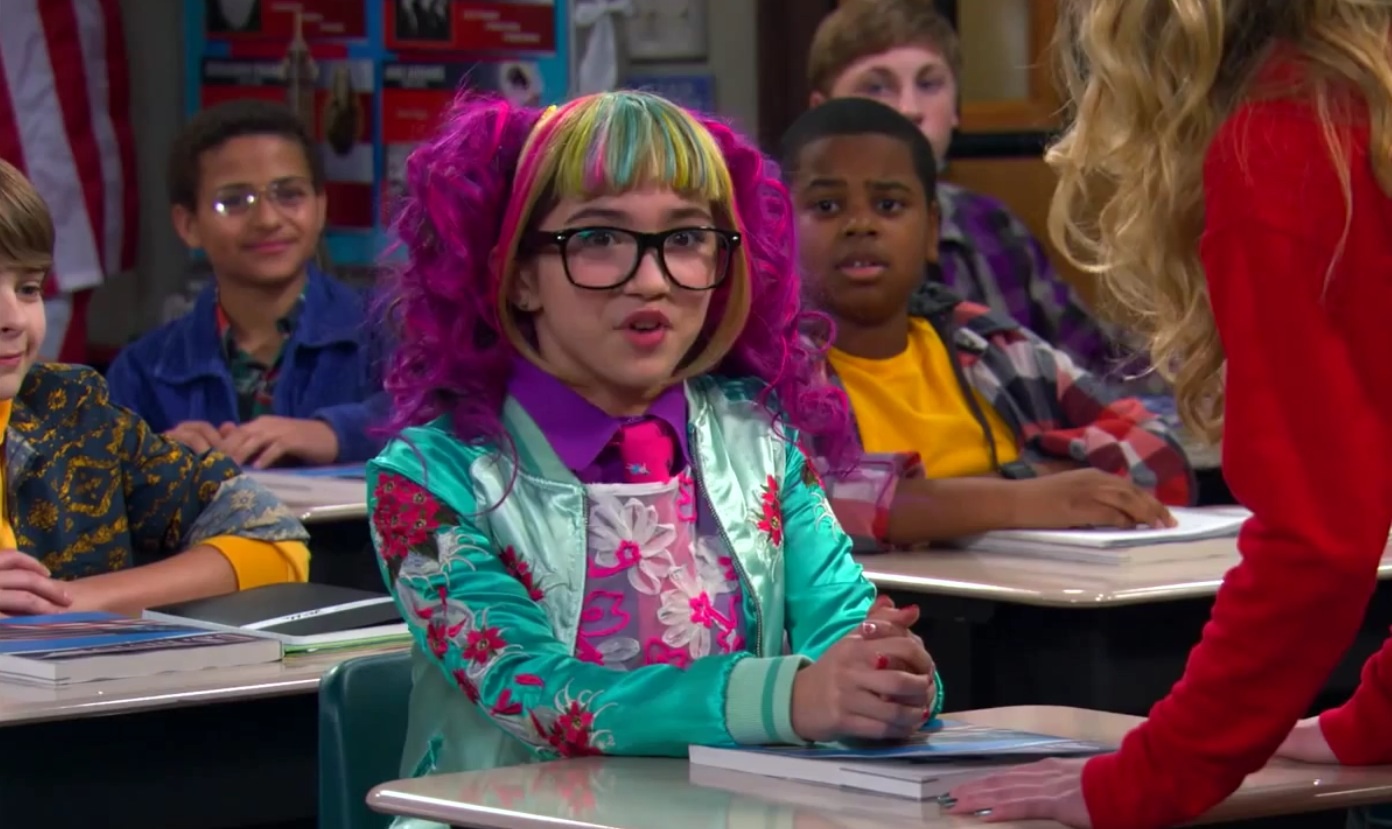 This is one of the places where I think Girl Meets World could work to better itself even within the limits imposed on it by The Disney Channel, because it often undercuts its own plots like it did this week. Think back to “Girl Meets Sneak Attack,” when Riley tried ineffectually to keep Lucas and Missy separate–despite Lucas never displaying much interest in Missy at all. Or the very first episode, in which the climax of the episode happens, not because Cory forbids Riley and Maya from seeing each other, but because Maya is afraid Cory will forbid them from seeing each other. For some reason, Girl Meets World seems to be afraid to actually dramatize conflict, and that makes its resolutions feel empty. The show’s best stories so far–Auggie’s decision to give up Googly Time and bedtime kisses for the girl he likes; Maya cutting Cory out of her life after he gives her an F; tonight’s Topanga plot–have all had both clear emotional stakes and realistic potential consequences. Without both of those things, a story will fall flat every time. “Popular” tried to use Maya to give the Riley plot a sense of stakes, but ultimately it failed on the “consequences” front.

Still, though. Topanga got a really storyline! Good job, show!

Perhaps because it was paying a lot of attention to dramatic work and characterization, the show didn’t have quite as many charming or funny moments this week. Still, I liked Maya and Farkle’s fight, mostly for the moment when Farkle says of Riley, “She’s one of us,” and Maya responds, “She’s one of me!” The episode-opening scene between Riley and Maya was also sweet and a little funny, as those scenes so often are. Although, I’m left to wonder: If Maya knew that the party Riley was invited to was a geek party, why didn’t she tell Riley that?

How Cory Matthews Failed As a Teacher This Week

So, let’s just get this straight. At the beginning of the year, when Cory was putting together his lesson plans for the semester, this is how it went:

Also, note that Cory’s giant “Sword of Damocles” drawing stayed on the board throughout the entire episode, which spanned at least three days. Cory spent three days of his history class teaching the students about a single fictional anecdote from the 4th century B.C.

Season 1, Episode 6 – “Boys II Mensa.” Originally aired October 29, 1993. Frustrated with Mr. Feeny’s constant instistence that he try harder in school, Cory cheats on an IQ test, making it appear that he’s a genius. But the plan backfires when the school district tries to send him to a magnet school for the gifted. In an odd bit of synchronicity, this episode’s theme, like “Girl Meets Popular,” has to do with being true to yourself. (It also deals a little bit with the importance of effort vs. intelligence.) It delivers its themes well enough, but it’s mostly a pretty forgettable episode. The most noticeable thing this week is Shawn’s increased presence. This is the first episode where Shawn is a major element–he’s involved with almost every step of the story. And, in a history-making moment, this is the first episode of Boy Meets World to refer to Shawn as Cory’s best friend. Little did they know.