It’s official: “Girl Meets Sneak Attack” contains the first successful storyline on GIRL MEETS WORLD. For the first time, the episode contains both an A- and a B-plot, and though the A-plot is broken in about ten different ways, the B-plot works almost entirely. It’s a milestone, really.

Here’s the breakdown of the episode. In the A-plot, Riley sees Lucas getting closer to her school’s resident flirt, Missy, and decides that she needs to grow up a little bit, or risk losing out on her crush’s affections. After a disastrous attempt at separating Missy and Lucas, Riley briefly enlists Farkle to help her learn the art of flirting. But it turns out she needn’t have bothered, because Lucas turns down Missy’s invitation to go to the movies when he realizes that Missy doesn’t want his friends (that is, Riley, Maya, and Farkle) to come along–because, he says, they’re only in the seventh grade, and right now friends are the most important thing. Meanwhile, in the B-plot, five-year-old Auggie gives up on his favorite show, Googly Time, as well as bed-time kisses, in order to impress his six-year-old crush. 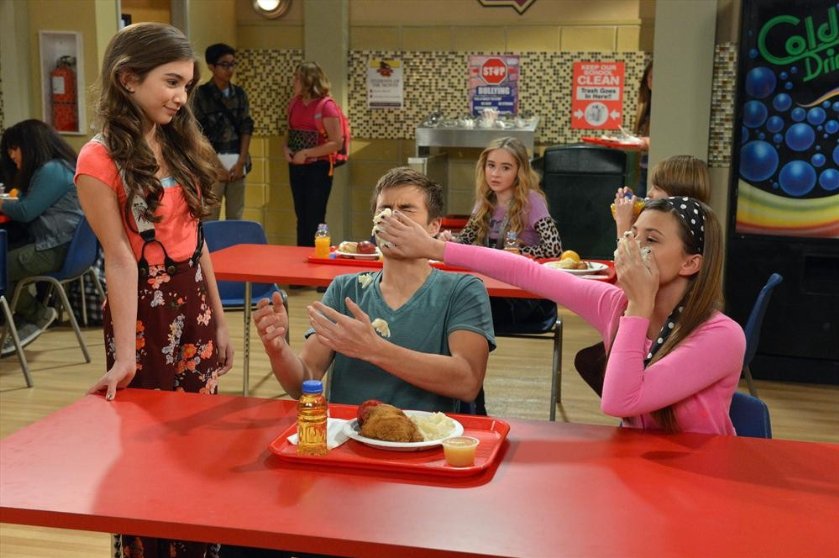 In other words, the two plots are basically the same story. So why is Auggie’s plot successful, while Riley’s isn’t? Well, for one thing, Riley’s plot never really manages to commit to anything. First, Riley wants to learn to flirt, and gets Farkle to help her out–but we never see Farkle try to teach her anything, nor do we see Riley try to put any of his teaching into practice. Instead, the plot gets diverted when Riley decides that what she really needs to do is keep Missy and Lucas from being alone together, and endeavors to get herself put in detention with the two of them. Then, when the whole main cast of kids is in detention together, it’s Lucas, not Riley, who solves the problem of the episode. Riley floats through the episode, talking a lot and occasionally embarrassing herself–but she never really does anything that affects the final outcome in any way.

Auggie’s plotline, on the other hand, is very streamlined. It’s confined to three or four scenes: Auggie declares that he’s giving up Googly Time; Auggie declares that he’s giving up bed-time kisses, and Cory and Topanga are heartbroken; Auggie brings his six-year-old friend over, and she declares that she loves Googly Time, and is taking Auggie’s Mr. Googly doll; Auggie, at Riley’s urging, agrees to go back to watching Googly Time and giving bed-time kisses. Auggie drives the plot the entire time, even if ultimately it’s a story more about his parents and their fears about him growing up than it is a story about Auggie. Indeed, Cory and Topanga’s clear and relatable emotional stakes in Auggie’s story only serve to make it better.

And that’s the other reason that Auggie’s plotline works better than Riley’s: Cory is much better utilized in it. With the show taking great strides this week in making Farkle less annoying, Cory is now unquestionably Girl Meets World‘s most unevenly written character. When he’s relating to Riley and Auggie as a father, or Topanga as a husband, he is neurotic, but relatable. When he’s acting as a teacher, he’s insufferable, partly because he can’t seem to separate his role as a parent from his role as a teacher. The best thing Girl Meets World can do for itself is to focus as little as possible on John Quincy Adams Middle School, and as much as possible on the Matthews household.

Three episodes in, it’s become clear that Cory is a terrible, terrible teacher whose continued employment is a clear sign that the country’s education system needs an overhaul. This week, Cory failed to perform even the most basic requirements of his job by: 1) letting a student leave his classroom during class for no articulated reason (i.e., she didn’t even claim to be going to the bathroom or the nurse); 2) allowing his students to carry on perfectly audible conversations during his lecture; 3) continuing to lecture, seemingly oblivious, as his daughter stood in the center of the classroom, yelled at a classmate, and then stuck her finger into another classmate’s nose; 4) punishing two students for food-fighting without even the most cursory investigation into whether both students were, in fact, guilty; 5) allowing a student to attend a detention that he had not been assigned; and 6) allowing a student who had been assigned a detention to walk out of it after two minutes.

Also, his Pearl Harbor lecture contained, as far as I could tell, no actual historical information.

I think I give the impression in my reviews that watching Girl Meets World is a chore, but I swear there have been moments in all three episodes so far that I’ve really enjoyed. This week, I loved the whole beginning section of the episode, particularly the moment when most of the main cast is eating breakfast together, and everyone starts singing the Googly Time theme song–they’re clearly way more excited for the show than the five-year-old is. Also, since there hasn’t been a place to work it in before, I should mention that I love that the name of Riley and Maya’s school is John Quincy Adams Middle School; Boy Meets World superfans will recognize it as a nod to that show’s John Adams Middle School.

“Father Knows Less” (originally aired October 8, 1993). After missing out on a father-son bonding trip due to an emergency at work, Cory’s dad, Alan, keeps him up past midnight so the two of them can watch a baseball game together instead. The next day, Cory falls asleep during a test, and Mr. Feeny refuses to allow him to make it up, leading Alan to feel that he has failed Cory. This is another surprisingly nuanced episode, as Alan and Mr. Feeny each start out with an opposing view, and over the course of the episode, each changes his mind, with the central conflict of the episode getting no real resolution other than an acknowledgment that both education and familial bonding are important, and that it is, in fact, hard to balance them. William Daniels knocks it out of the park with his gentle speech to Cory about how important father-son bonding could have been, but wasn’t, in his own life–I actually cried a little, but then, I’m an easy cry. And you’ll learn more about World War II from Mr. Feeny’s reminiscences than you will from any of Cory’s actual history lectures on Girl Meets World.

Madelyn Glymour is a freelance writer based in LA. She shares her generally unpopular opinions about television at stopitshow.blogspot.com.
Twitter: @MadelynTheRose