Tweetable Takeaway: Clear, coherent and funny, this week’s Girl Meets World sets a standard the show should try to live up to every week.
Tweet


Airtime: Thursday at 8 pm on The Disney Channel
By: Madelyn Glymour, Contributor

“Girl Meets the Forgotten” is a good episode of television. It’s not great, but you’d be hard-pressed to find something that’s majorly wrong with it. It bypasses a lot of the normal GIRL MEETS WORLD pitfalls: There are clear stakes; there’s an obvious reason why the characters need to learn the lesson they do; and there’s actual follow-through and consequences for mistakes that the kids get to actually make. In short, there’s a fully realized and entirely coherent story here, something that can’t be said of Girl Meets World every week.

In fact, if there’s one thing that drags “The Forgotten” down, it’s the show’s previous episodes. Girl Meets World is definitely not serialized — nearly every episode has been aired out of production order — but it’s made real attempts at continuity, in detail (the Ukrainian bakery that keeps showing up), in plot (Auggie’s manipulative girlfriend Ava), and in characterization (Maya’s evolving relationship with her art). That’s laudable, but it means that every episode has to be judged against what came before it. And in “The Forgotten,” there are some definite inconsistencies. For instance, it makes sense that Riley, Maya, and Farkle would be inconsiderate to the people on the edges of their lives — especially Maya and Farkle — but Lucas? Up until last episode, Lucas had displayed exactly three character traits: dry wit, a Southern accent, and unfailing courtesy. Now, even the most courteous people can have blind spots, so maybe I can overlook Lucas’ inconsistency, but there’s also Cory. His preaching about thoughtfulness towards the people who make sacrifices for you is pretty hard to swallow in light of the episode he spent making fun of Topanga for a poorly cooked chicken. In that case, I blame the previous episode more than “The Forgotten,” but still, these are the perils of continuity. 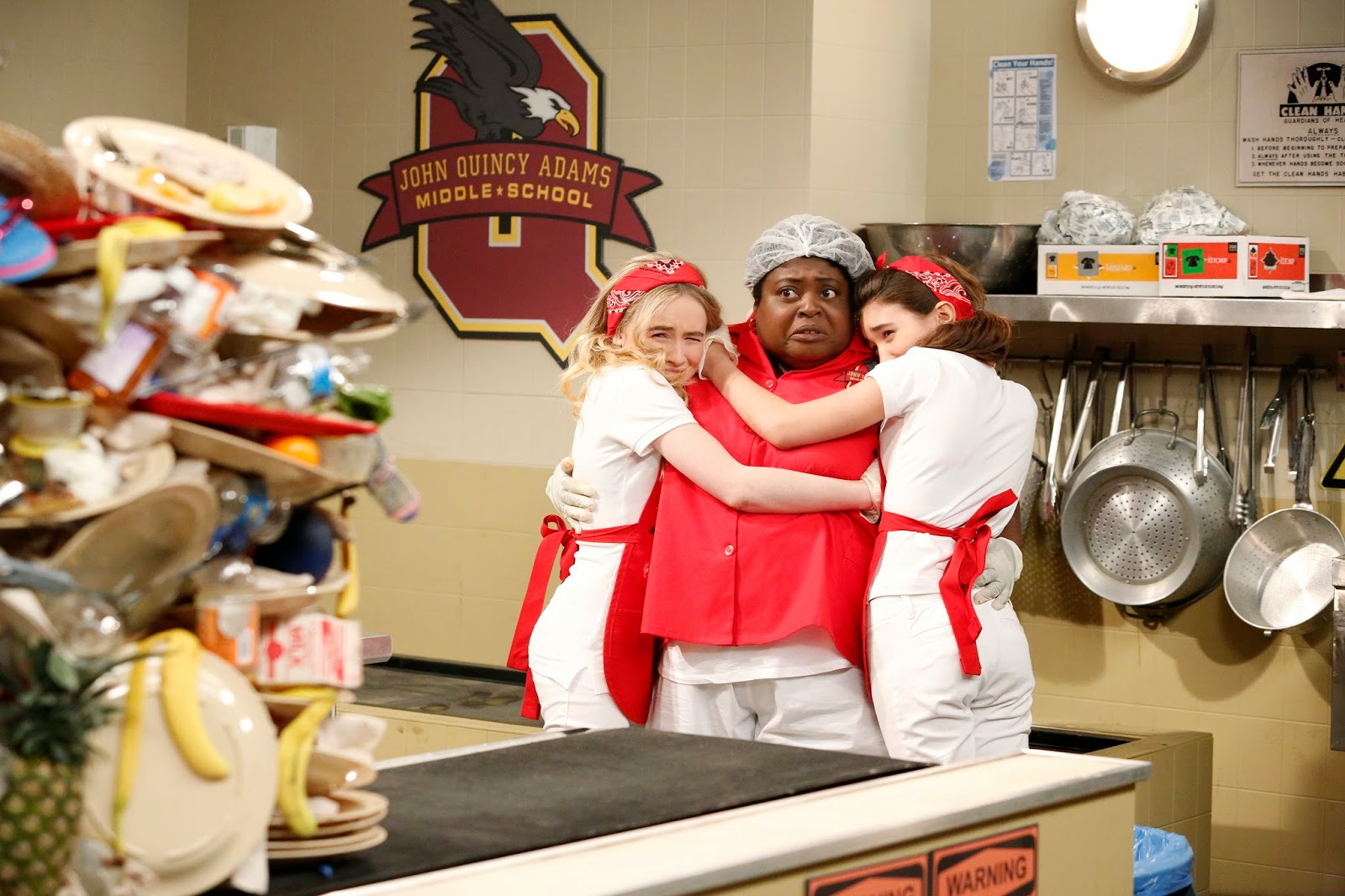 It leads me to wonder why this episode was so much more successful than most. In part, I think it’s a question of focus. The strongest episodes of Girl Meets World have tended to be those with a heavy Maya or Topanga focus; the weakest have centered on Farkle and Cory. “The Forgotten” sidelines Farkle almost entirely — he’s basically just the guy hanging out with Lucas — and puts Cory at a distance, bringing him in only to make his theme-identifying speech at the beginning and to assign the kids to their electives. Meanwhile, Topanga is the heart of the episode. The majority of the drama stems from Riley’s failure to see how hard she works, both at home and at her job. The “and at her job” is important, because it means that Topanga’s part in this episode isn’t limited to wrangling Auggie, as it often is. In fact, Auggie is entirely absent from “The Forgotten,” which probably also contributed to its success; there’s nothing wrong with Auggie per se, but his storylines tend to detract from rather than add to the episodes they’re in. They also eat up 90 percent of Topanga’s screentime.

I’m not saying that Girl Meets World should stop writing episodes about Cory and Farkle. But it should try to make those characters as interesting and consistent as Maya and Topanga. And it should work to make every episode as coherent and structurally sound as “The Forgotten.” This was a fine episode of Girl Meets World, but it should be the baseline. There’s no reason that every episode of this show shouldn’t have, at the very least, a plot and theme that make as much sense as they did this week. This show has interesting themes, some much more interesting than this episode’s, it’s often very funny; episodes like “Girl Meets Smackle” and “Girl Meets Crazy Hat” would have been great, if they’d only managed to find a throughline.

I don’t know if “The Forgotten” was actually funnier than normal, or if I just appreciated it more without Farkle or Ava to distract me, but for whatever reason, I laughed a lot at this episode. I write down the best lines and moments in every episode as I watch, and this week, the list is about twice as long as normal. The good moments were also a lot more spread out than normal; sometimes it seems like Maya gets all the best lines, but everyone got something good this week. Maya does, obviously, get some great moments (“Why do they call them electives if they make us do them?”), but there’s also Riley, with my personal line of the episode: “We worked all day for 45 minutes.” Even Cory gets to make fun of himself: “Girls, your electives will be — and I don’t think anyone saw this one coming — cafeteria duty.” I also enjoyed Cory’s speech to the empty cafeteria at the end of the episode, which is self-deprecating in a way Girl Meets World rarely is, and Riley and Maya trying to send themselves through the dishwasher. It was just a fun episode all around.

Also, “The Forgotten” marks the third appearance from a Boy Meets World alum on Girl Meets World! High school bully Harley Keiner (Danny McNulty) shows up as the janitor with whom Lucas and Farkle volunteer, and the show never even mentions it — though Harley does call Cory “Baboon” once at the end, just for old times’ sake. IMDb indicates that he’ll be in at least two more episodes, which I heartily approve of. I’d approve even more if they could get Adam Scott (who played Griff Hawkins, Harley’s temporary usurper, on Boy Meets World) to cameo.

Well, for a change, this week it was Cory who walked out of the room in the middle of class, not one of his students. And he continues to teach very little history in his history lessons. (And despite his best efforts to compare them, I’m still not sure that the plight of the working man in the Great Depression is a great parallel to working moms whose middle-school children don’t appreciate them.) But overall, this was one of Cory’s better weeks: He managed to teach the kids a life lessons without completely derailing his class. Good for you, Cory!

This week’s chalkboard: “THE FORGOTTEN”

Season one, episode 12 – “Once in Love With Amy.” Originally aired January 7, 1994. When Cory and Eric realize their mom is lying about attending her weekly bowling league, they follow her, and catch her — they think — cheating on their father. But when they bring their news to Alan, they discover that their parents have in fact been lying about their whereabouts so that they can go out on weekly dates together. Meanwhile, Mr. Feeny gives his class a difficult math problem that turns out to have no solution. (The problem, for the record: “Al washes a car in six minutes. Fred washes the same car in eight minutes. How long does it take Al and Fred to wash the car together?”) This is another weird Boy Meets World episode where the stated theme (“Sometimes there’s no right or wrong answer”) is substantially different from the theme that actually holds the story together (“Relationships are hard work, and sometimes you need time to let loose”). When Cory objects to his parents ditching the family for date night, Amy tells him that the difference between adults and children is that adults understand that sometimes, there’s no straightforward right or wrong to a situation. That’s true, but it’s also irrelevant, because in this situation, Amy and Alan are clearly right. They have money and time, and their kids can live without them for two hours a week; of course they should take a little bit of time to themselves to make sure their marriage stays solid. This is not a grey area. This is like, Marriage 101. Fittingly, it turns out that the impossible problem that Mr. Feeny gave to his class actually does have an answer. The answer is 3 and 3/7 minutes. You guys, I’m starting to think that Mr. Feeny might be… fallible. That can’t be right, can it? Anyway, as with most Boy Meets World episodes, the best line more than makes up for any flaws, and in this case, the best line is Eric’s: “Are we still a family, or have we become, like, an after school special?” Oh, Eric. You always were the most attuned to the fourth wall.