This episode starts out just where the last one left off, with the blue suits from IBM pouring into Cardiff Electric in an attempt to catch MacMillan, Gordon, and Cameron in their lies. Except one cross-examination scene later and it’s all dropped. All parties stick to the script, Gordon’s reverse-engineered binder of BIOS code is kept secret and everything is above board. This leads to a lot of corporate rah-rah from MacMillan, a lot of seething from boss Bosworth (Toby Huss), and the formation of an all-new personal computer initiative, which leads Gordon to a cushy promotion and his own office.

From there, it seems like Cameron’s inability to stick to her “clean room” will be the engine that drives the episode, flagrantly disregarding the agreed-upon confidentiality measures. She also sleeps in the office, which seems of a piece with the show adding mysteries instead of deepening characters with meaningful detail. 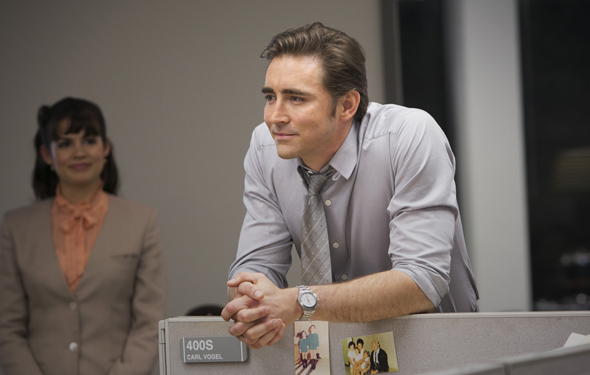 While Cameron and MacMillan clash, Gordon gets accustomed to his promotion out of the cubicle farm. Strangely, that means he lies to his wife about Cameron’s gender. For a moment, it seemed like she was going to be jealous that they’d hired another female engineer instead of her… but instead, it played out as though Gordon was concealing it because he and Cameron have some kind of flirtation, which absolutely doesn’t match with the platonic vibe they’ve had in the few scenes they’ve shared.

Things take a sharp turn in the third act. All of a sudden, we’re transported into an episode of Mad Men, with an office bullpen full of bad news about accounts. It’s almost nice to understand what’s going on after so many years watching Sterling Cooper and cohorts deal with similar calls. IBM swoops in and instead of exhausting Cardiff with legal troubles, they steal all of their clients.

It’s a strong twist, but introduces a completely new conflict far too late for it to be sufficiently developed. And when taken in combination with the cryptic message from the exec who warns MacMillan about Cardiff learning “what he is,” makes it seem like MacMillan might be the Wolfman? A Wolfman who did some property damage and whose father has some stake in IBM?

The missteps continue with some hastily edited scenes where Cameron does and then doesn’t need the illegal-for-her-to-see BIOS because she’s terrible and then amazing at engineering, then is recruited by IBM techs but rebukes them offscreen, all while the company goes bankrupt and prepares to either shut down or complete their PC in two months.

But all of the flaws culminate in one of the strangest climactic monologues/reveals in cable history (…probably), when MacMillan convinces Cameron and Gordon to stay by:

1. Coincidentally driving into the parking lot at just the moment they’ve both decided to give up on the project.
2. Getting into a tussle with Gordon that conveniently rips his shirt to show off his abs, covered with prosthetic scars that wouldn’t be out of place on the CW.
3. Delivering a ham-fisted, cornball speech about how his childhood love of science over sports led his classmates to chase him off of a roof (which, as we know, leaves only small ab scars), meaning they should stick with the project. This story, by the way, has such blatant factual errors (namely, the wrong Sputnik landing date) that Cameron calls it out as false only to get a noncommittal “ain’t I a stinker?” reaction.
4. Immediately drives off in his fancy car—backwards.

The HALT AND CATCH FIRE that produced that sequence isn’t the same show that produced the overcrowded but generally solid pilot. It’s a much weirder, in many ways, not as good show that plays with the expectations of cable drama by indulging all of its tropes with a character that seems almost aware of them. So yes, the whole back half of this episode is filled with problems, but at least for right now, they’re interesting problems.

Kayla Hawkins is a writer in Los Angeles who loves television in general, RuPaul’s Drag Race specifically, and spends most of her time convincing people to watch Bob’s Burgers.