This is a make or break moment for HALT AND CATCH FIRE. So far there’s one episode in the “competent and boring” column, and one in the “’Newsroom’ season one back when it was wonderfully bad” column.

As we last left off, Cardiff’s client base was poached by IBM, slashing their budget, forcing Gordon into the uncomfortable position of firing the lion’s share of his staff. Each member of the team deals with this in different ways, dovetailing into their own separate storylines. MacMillan stares determinedly at his collection of 80’s technology in triumphant nakedness, ready to take on the world. Cameron, still living in the office, goes on a shopping spree through the now-empty desks, all in an effort to procrastinate finishing the BIOS. Bosworth seethes, which seems like the most appropriate reaction.

MacMillan fixates on the idea of a smaller, lighter computer, but his now pocket-sized staff quickly shun it as impossible, leaving him to deal with the corporate world. While he goes after high-minded investors, he gets stuck with an old-school Southern Belle named Lulu who wants to snag the controlling interest in Cardiff’s project but has a tempting amount of their much-needed capital.

Gordon remains in the think tank, with the annoying coworker who popped in with a Matthew McConaughey Lite impression last week, who sticks close by, always ready with a corny one-liner like “yuck your yum” and to naysay every idea.

Fortunately, we get our first scene with Donna (Gordon’s wife) outside of the family kitchen; unfortunately, it’s filled with thinly veiled sexual tension between her and her boss, a successful Texas Instruments schmoozer. But it’s redeemed when Donna is inadvertently the one who makes Joe’s million dollar idea possible by essentially folding over the motherboard. Of course Matthew McConaughey is there the next morning, ready to shoot it down like a boring, pessimistic Tyler Durden. 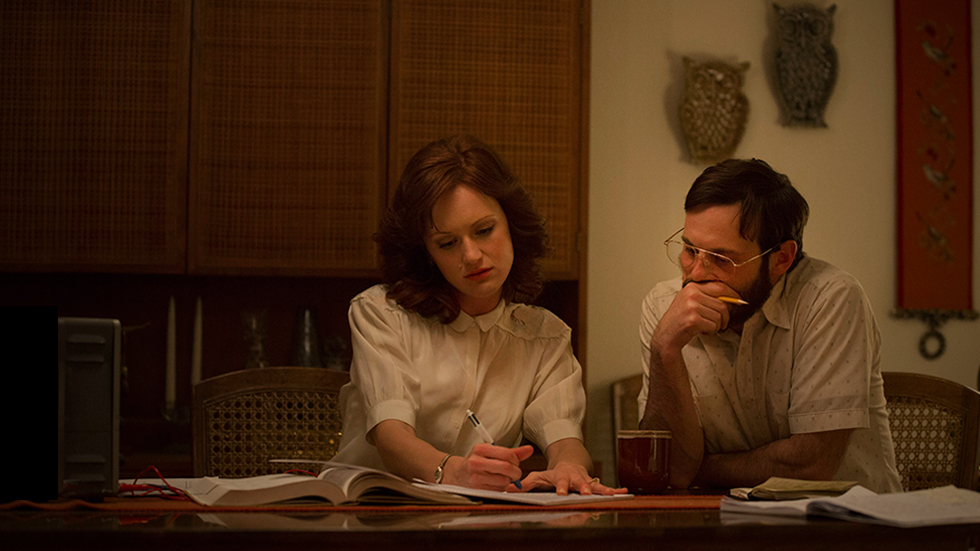 Cameron gets her first check, splurges on junk food and runs into some primordial crust punks who convince her to blow the rest on a motel room dance party where it seems like she’ll come up with the breakthrough idea that will help her finish the code, but only ends up getting a really terrible homemade tattoo. This character is not as cool as her wardrobe and music selections initially suggested.

Somehow Halt and Catch Fire manages to keep a straight face for just over half of every episode and then come up with a shocking final act revelation that casts everything before it as boring and everything after it as rushed, hilarious, and completely ridiculous. So when we check back in on MacMillan, it seems like all is lost. His company is slipping from his grasp and his engineers are bumming around like a couple of sad sacks.

But then, like an adrenaline shot in the heart of the episode, MacMillan turns a boring negotiation scene into a gay sex power play. Seriously, one wordless hookup with LuLu’s trophy husband and all of a sudden the deal’s dead and MacMillan’s back in business!

Gordon fires McConaughey Lite and walks off with new confidence!

And, most of all, Cameron finally admits she has no idea what she’s doing!(!!!)

I’d put the last ten minutes of this episode up against anything from tonight’s finale of “Game of Thrones” on pure shock value. These people really are on the edge of changing the world, and yet they’re a couple of the biggest buffoons ever documented on television. It’s fun, summery drama at its absolute weirdest.

Kayla Hawkins is a writer in Los Angeles who loves television in general, RuPaul’s Drag Race specifically, and spends most of her time convincing people to watch Bob’s Burgers.