Airtime: Thursdays at 9PM on ABC
By: Jessica Li, Contributor

What better way to start off episode 2 of SCANDAL then with blackmail…oops, uh…I mean leverage.

This episode opens with Olivia having a secret meeting with Cyrus. The State of the Union address is in two days, with the main topic being gun control. Her job is to ensure that 2 attendees, James and Lisa Elliott, the political faces of gun control issues, are there because they’ve already missed their flights and can’t be reached. Despite her protests, Cyrus lays it out for Liv, either she works for the White House or Cyrus tells Fitz that she’s still not over him and is pining for him.

She opts to work for the White House. The last thing Liv wants, is have Cyrus start fanning those flames. #teamjake

Olivia flies out to New Mexico to find out what happened to James and Lisa Elliott and discovers the “perfect” couple hated each other. Their fight escalates, glasses are being broken, fire extinguishers used, Olivia actually had to raise her voice to shut them up. Liv convinces them to board the plane to Washington and Huck and Quinn are placed with the task of watching them and making sure they don’t kill each other before the State of the Union.

Meanwhile, Fitz is busy watching Mellie, who is still wearing a bathrobe and Uggs and laying on her son’s grave, while eating potato chips. Paparazzi photograph her doing all this and she’s dubbed “Madam First Crazy”. 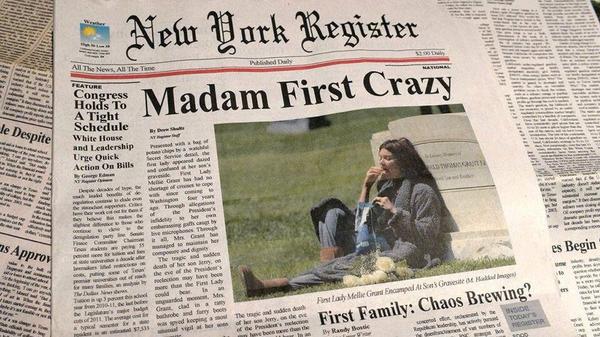 Once the “Madam First Crazy” photos got out, Fitz and Cy decide that it’s in their best interest to convince Mellie to attend the State of the Union and show the world that she’s not “crazy”. Which, she actually isn’t, she’s just grieving for her son the only way she knows how, but eating fried chicken while doing it. Millie was raised with manners, so of course she offers them a piece of “southern” fried chicken and then laughed in their faces as she told Fitz that she’s not going.

Abby discovers Olivia doing what should be “her” job and calls Liv out. She drops Liv a bomb letting her know just exactly how much she’s missed while she was gone. “Huck and Quinn were incesting all over the office.” The look on Liv’s face told me that she might replace that conference room table in the next episode.

After finding out Huck and Quinn have been “incesting” all over the office, Olivia goes to the hotel and demands to know what is going on with them. With all the sexual tension between Huck and Quinn, aren’t we all waiting for something to happen? While at the hotel, Lisa stabs James in the leg with a cork screw and it pushes Liv over the edge…well the edge of making this whole thing come together. She tells them that they need to get a divorce and she will help both of them spin it and they’ll come out as heroes but they can’t stay together and they need to get a divorce. Well played Ms. Pope. You knew they didn’t really want a divorce.

Since Cyrus is stressed about Mellie not showing up, Abby decides to take a page out of Liv’s handbook and goes to have a heart to heart with Mellie. She give a Liv inspired speech about how kids die everyday and that everyday people don’t get the luxury to be “crazy” and grieve for their children because they’ll lose their jobs. She tells Mellie that “her” job is to be the First Lady and she needs to show the American people that her son’s death hasn’t destroyed her or the First Family and to be strong like Jackie O. It was enough to get Mellie out of her Uggs and into a red dress, fit for the First Lady.

Fitz, about to give the State of the Union address, asks Liv to give her opinion on his speech. Despite everything telling her not to, she does what she does best, handle it. She tells him that he needs to go off-prompter and be genuine with the American people. He needs to discuss what is happening with Mellie and with the death of their son. Once he address that, then the people will listen.

The speech was a success and Olivia Pope saves Fitz, AGAIN! Can she stay away?

After handling business for POTUS, how does Olivia Pope end her day and relieve her stress? She shows up at Jake’s hotel room, the one he got for “booty calls”. She tells him that this isn’t a booty call and before Jake can start to disagree, she takes off her trench coat, reveals she’s wearing nothing underneath, EXCEPT a pair of high heeled boots…and that is how Olivia Pope shuts a man up and conduct a #bootycallnotbootycall!

Oh, we also find out that Cyrus has been lonely since his husband, James died. He gets hit on at a bar by a man who turns out to be an escort. After refusing the escort’s advances, the “escort” meets up with Elizabeth (Portia De Rossi) leading us to speculate about a plan to take down Cyrus and Fitz by the RNC. Also, David is sworn in as the Attorney General of the United Stated as Jake is working with him to solve Harrison’s murder.

Jessica is a tv addict by day and a ninja assassin by night.
@letstacobouttv