Katrina’s gone full dark-side on SLEEPY HOLLOW this week. If you couldn’t tell by her black dresses and the weird blood rituals, the writers finally decided to tip her over to the forces of evil. I thought she might be more interesting when she was all white-eyed and full of malice, but nope. The wicked witch of Sleepy Hollow is still as boring as a brick.

This was not my favorite episode in general. The plot of this one went all over the place. Henry tries to ring a Liberty Bell back-up to awaken a coven in the town. Anyone with witches blood would be drawn to him and be essentially brain-washed, it looks like. It’s not really made clear if these neo-witches would have control of their facilities. Henry isn’t strong enough to make the awakening happen for more than a few seconds, but don’t worry – the usefulness of this plot line only lasts a few seconds anyway. 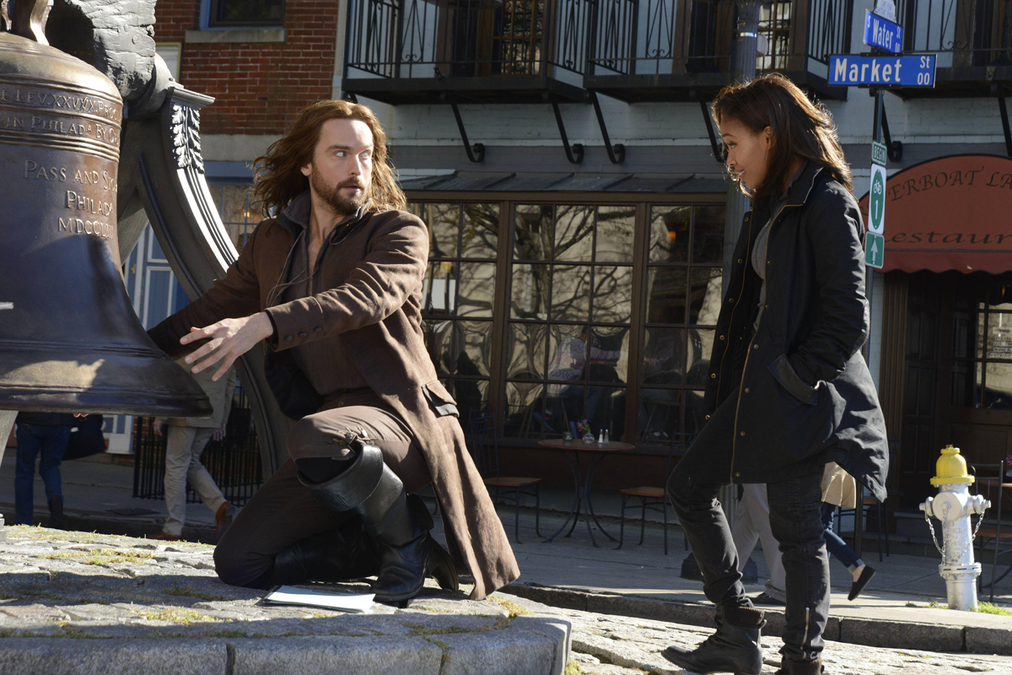 Henry picks up his mom and suddenly Katrina abandons two-hundred years worth of her morals. She drops Ichabod with little to no explanation and recants everything she ever did for him. The fireball she blasted at Abbie’s car was completely uncool. It just doesn’t really make sense that she falls so fully into the dark side when she looks like she’s going there of her own free will. The evilness crept up on her for about two episodes and now she’s flipped to the total opposite side, not even counting her waffling when it came to the Horseman (where is he, by the way?).

There’s also Henry’s weird positioning (it must run in the family). He says that he killed Moloch based on “pure primal instinct,” but it was to protect his mother. But in the last few episodes, he made it sound like he killed Moloch so he could start his own apocalypse with henchman Irving. It doesn’t make a lot of sense and they’re tying up their loose ends here at the next-to-last episode without any finesse.

The only real talk coming from the Crane family is from Ichabod, who’s been steadfast and loyal to his fucked-up family, even though they’ve tried to kill him and turn on him every other week. Henry accuses him of abandoning him again (yawn), but Ichabod comes back with “I never even knew you existed.” Ouch. The kid gloves are off and Ichabod is mad, which I’ve wanted him to be more angry and less rational the whole season. He’s had some really terrible hands dealt to him, and in this episode, with him losing his son, his wife, AND Abbie, I’m not sure what else they can do to him to break his spirit. I’m sure the writers will find a way.

With Abbie, I was glad that she kept her distance during the Crane family drama, but quietly gave Ichabod her support. “I’m glad I’m not doing this alone,” was a really well-written line. It gave Ichabod a chance to brush off her support, or for him to commiserate and bolster their friendship. Abbie is so, so careful about who she lets into her circle of trust – as she’s obviously been burned before – and to see her cautiously, but steadily extending this background support to Ichabod while keeping her own life her own business, it’s beautiful to see.

Now that Henry’s dead, his hold over Irving is released and he can start trying to convince the Witness squad to trust him again. Though his evil side is gone, I really like that it gave him a chance to voice some real concerns from Irving. He screams at Jenny through the glass wall that they used him, which is absolutely true. They didn’t bring his daughter to see him in the asylum. He was abandoned once his usefulness was gone and while I don’t think the Witnesses did it maliciously, it still hurts Irving and affected his life in dramatic ways. I hope he doesn’t forget all that’s happened when he goes back to being a ‘good’ guy.

While this episode was weak one, I’m extremely interested in the season finale. They used a sick Rolling Stones cover that echoes back to the beginning of the series when they fling Katrina and Abbie back in time. While it’s not really explained why Katrina just completely gives up on the coven idea (maybe because Henry is dead), she hops back to Sleepy Hollow two-hundred years ago when she was still pregnant with Henry/Jeremy. They’ve already started showing the effects of slavery and racism and what they’ll mean for Abbie stuck in a time where she was not allowed any rights, not for her race and especially not for her sex. If they needed to sacrifice and episode to bridge to this awesome finale, I’ll accept it. It’s not the best idea to waste any second of time in the series, but they had such a strong episode last week, then what looks to be an excellent ending, so I’m still onboard with Sleepy Hollow.