Tweetable Takeaway: Katrina and Ichabod go on a date that ends in blood while Abbie deals with the living dead.
Tweet

Disclaimer: I unabashedly love SLEEPY HOLLOW. Since the very first episode, I’ve been delighted with the insanity that comes forth every week from this odd little show. Nothing about it should work – Ichabod Crane in modern times, fighting the Headless Horseman with a female lieutenant of the Sleepy Hollow police. Turns out they’re Witnesses to the ever-coming apocalypse, destined to fight side by side to keep the demons at bay. Monsters of the week turn up all the time, along with an entire caravan of secrets about George Washington and the founding fathers who were up to much more than establishing the states.

Speaking as someone with a history degree, the high amount of inaccuracies should be enough to put me off, but I’ve learned to let common sense and high standards go. This show is batshit every week and with all expectations released, I find it to be one of my very favorite things to watch. Where else are you going to get a witch, a (extremely sexy) modern privateer, quality sibling relationship development, and quips from man out of time while they all fight against the end of the world? I don’t think anyone else could do it better (and with more diversity) than Sleepy Hollow. I’m looking at you, Supernatural. 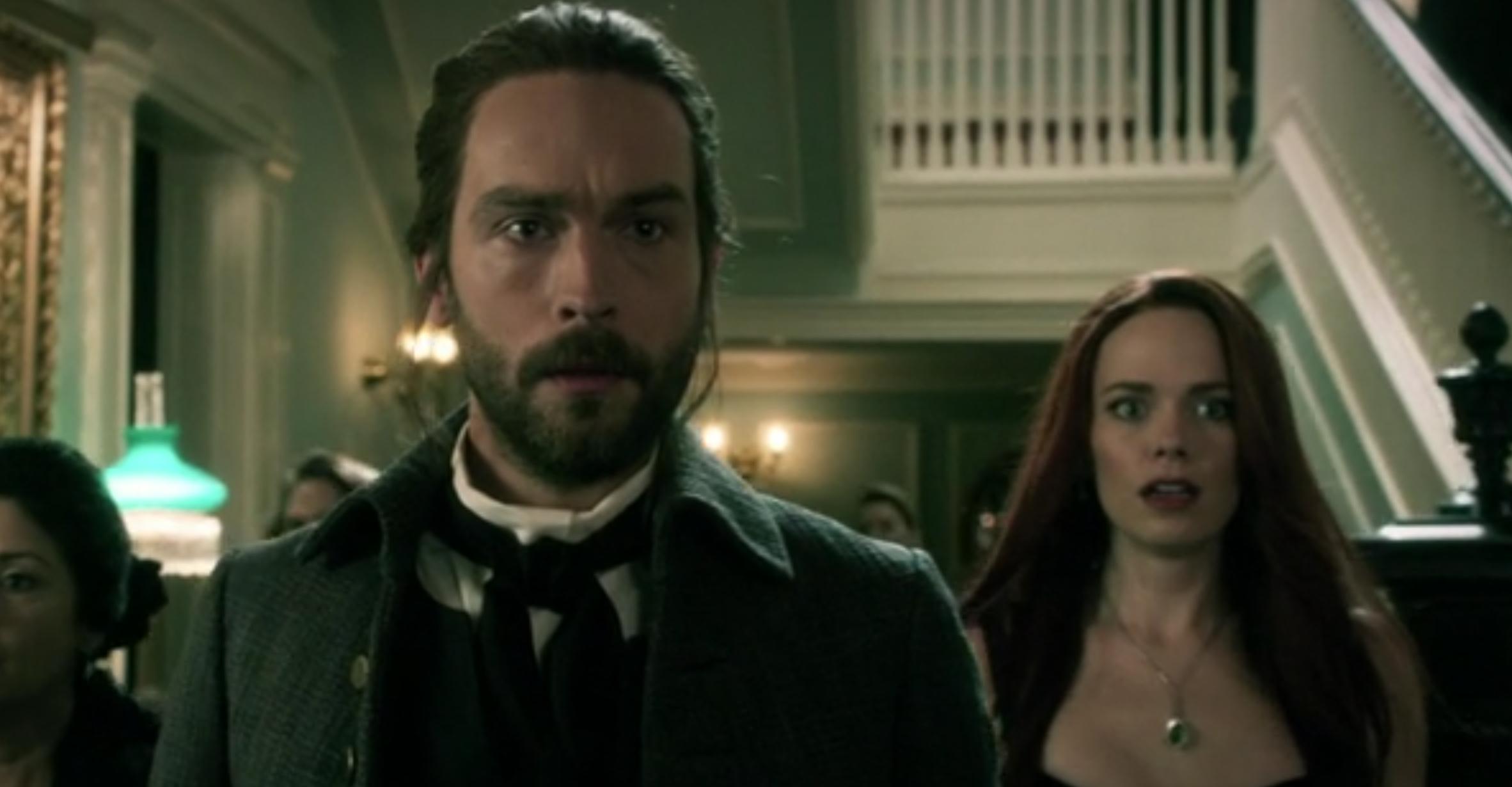 There’s been some rocky waters this past season for the Crane lovebirds. Maybe Katrina should have stayed in purgatory, where she was vaguely helpful to the heroes and Ichabod didn’t look too closely at their relationship across time or her motivations. She was more a memory than a wife and now that the writers have decided to full on keep her in the show, she’s been a weak link, someone who jeopardizes the team without being fully evil or good. Mostly she’s just been annoying. My hopes for her disappearing were dashed by this episode.

One of the my favorite parts of the show is the kick-ass friendship between Abbie Mills and Ichabod and this episode sets up Ichabod and Katrina to be the ‘new’ demon-smashing duo. Not okay. The only benefit I saw from setup was a sweet moment were Ichabod tries to reconcile his place in the past with living in the present. He tells Katrina that while their friends are gone, they are still here and have to integrate to survive. I like hearing his perspective on this, as he’s done a lot of adjusting throughout the two seasons. I’m not sure if it’s good or bad for him to have someone from his own time to relate to when he was getting on with modern times.

Irving, the thought-dead ex-police captain, comes back in this episode. I want the writers to do better by him. In the previous season, he protected his family and paid a way heavier price than he should have. He’s soulless now, dead once over, and now arrested again after he comes back to find Abbie again. I was endeared by his character in season one, even when I thought he might be evil at first, but now he’s a bit of a husk in comparison. He’s being turned evil against his will and I’m not sure what’s going to happen to him, but it’s smart of Abbie to be wary of his return. She’s the voice of reason throughout and it makes me love her all the more, even when my heart is breaking for poor Irving. At least Jenny is on his side.

Our monster this week is pretty cool! Sleepy Hollow upped their game this season with great makeup and awesome concepts for their bad guys. I really loved the drowned woman from a few episodes ago, but this week ups the creepy factor to eleven. A murderous artist lives inside his own paintings and comes out to slay then hop back in his masterpieces to hide. He looks scary as hell, walking around covered in blood and leaving red handprints everywhere. While the show occasionally veers into campy horror ground, every so often, they pop out a genuinely frightening episode and this is one of them. Ichabod and Katrina even go inside of his painting world and Ichabod gets a great line: “I’ve entered the mind of a murderer.” It’s exactly how you’d think it be – damned spooky.

Weirdly, Abigail Adams is all over this episode with a wasted cameo by Michelle Trachtenberg. She seems to have been a murder investigator and also a coven ally? Again, suspension of disbelief is best in this show. Who cares! Abigail Adams was awesome in real life, why not make her even cooler by finally adding a woman or two into the secret supernatural defense squad of the founding fathers? Sleepy Hollow is definitely willing to go there.

Abbie comes in to save the day at the end, again proving to me that the writers can manage female characters. One of the strongest pulls of the show is the relationship between Jenny and Abby, women of color and siblings with a complex, deeply interesting past and present. They are well rounded and flawed and it looks like all their effort for their female characters is going towards these two and we’re left with washed out Katrina at the end of all things. She’s a one-trick pony that pulls magic out of the air to try and fix whatever crisis pops up. But I feel like she’s weighing things down, an extra wheel to the fantastic duo of Crane and Mills. We’ll see if Ichabod finally deals with all the betrayals from his wife, but I want to see more of his friendship with Abbie and their platonic dedication to each other as the two Witnesses.