Here we are at the finale of SLEEPY HOLLOW season two! This episode hit so many high notes and reminded me of everything I love in this weird little show. While the show-runners usually take historical accuracy and turn it on its head, this ending went completely bonkers and threw a wrench into the clockwork of time. Benjamin Franklin gets beheaded! It’s just as cool as it sounds.

While you might think this would be a Crane family episode after all the angst of last week, this episode brought me pure bliss in the form of ass-kicking Abby Mills and her fantastic character growth. Thrust into a world that is formed to hate her, Abby doesn’t languish in her cell – she finds Ichabod, convinces him of her validity, and they get to work on getting Abby back home.

There was so much good about Abby’s interactions with Ichabod. They were meeting for the first time all over again and the reversal of their roles was genius, though Abby certainly has the advantage of knowing what she was doing in a time that’s not her own. The stiff formality between them and watching it melt just the tiniest bit, it reminded me of their friendship in the modern time and how much I missed seeing them just be together.

One of the most endearing things out of either season came in the form of Abby trying to convince Ichabod that she was telling the truth by looking at her phone. The passcode for it is Ichabod’s birthday and she wanted him to look at a selfie video they had taken. Realizing that Abby made Ichabod’s birthday her code made me clutch my face, but also it made me realize that there aren’t a lot of other people in Abby’s life that are as important to her as Ichabod. We don’t see her interacting with the force too much anymore, she doesn’t have a dating scene, and her emotionally quiet sister is just as focused on the mission as she is. This was a very subtle piece of writing, reflecting on Ichabod and Abby’s friendship and the real impact with the small things in their lives. It gave Abby another dimension in her already well-structured character – she takes selfies, she spends time with Ichabod, she cares about him even if she doesn’t say it too often.

With Ichabod, I was happy to see his Captain-side in something other than a flashback. There was some good writing here (and fantastic acting from Tom Mison) in how Ichabod was clearly still the Witness we love, but very, very much of his time. He doesn’t leap on Abby’s revelations quickly, but when he does, he puts single-minded focus into helping her achieve what she needs and accepting his role as her partner and, tentatively, her friend, in the short time they see each other. As with Abby’s scenes, they way they fall into sync, even as strangers two-hundred years apart, reminds me of how beautifully these two work together and erased some of the bad blood that was starting to stagnate between them, especially in this past season with the strife of Katrina and Henry threatening their bond. 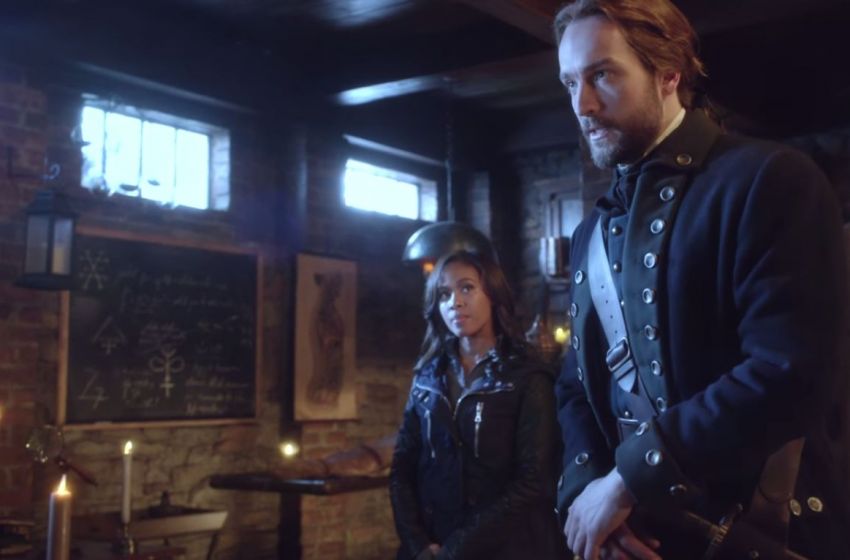 Praise be, the wicked witch is dead! You’ll not hear an apology from me – I’m glad to see her go. I feel a great sympathy for Ichabod to have lost his wife by his own hand, but he lost her much earlier when she turned to blood magic. She even drives the knife deeper into his heart by not even acknowledging him while she’s dying. She reaches for the ghost image of their son and Ichabod is left to clutch her lifeless body without a drop of remorse from the woman he truly did love, despite all the betrayals. It makes me wonder what the Horseman is going to do when he finds out Katrina has died.

It was nice to see her go full evil in the 1700’s before the killed her off. Her white eyes and lightning blasts were pretty cool to see, especially when they turned up the wind machines and let her cloak go flying outside on the lawn. The Horsemen seemed fairly redundant in the face of her powers, but then, we wouldn’t have had the dramatic moment of the battle axe freezing a hairsbreadth from Ichabod’s neck as Abby reversed the spell with her ancestor.

Letting Abby get a chance to meet Grace Mills (and finding out Abby’s full name!) made me so happy. The Witnesses use her journal to guide them, Abby talks briefly about wanting to use the Medusa head to revive her from stone, and it’s clear that Abby greatly admires her. She’s the most similar to Abby herself and one of the few people that can relate to her trials as a Witness because she knows what Abby has to go through. Not Jenny or her mother or even Ichabod can relate as closely as Grace can. Abby meeting her and the tears on her face at introducing herself was moving and wonderful. It felt like it boosted Abby’s confidence in herself to hear from her ancestor that she was doing the right thing. The only thing that could have made it better was Jenny being present to meet Grace too, but it was truly Abby’s moment to shine.

Now that evil has been temporarily vanquished from Sleepy Hollow, I can’t wait to see what evil they throw at us next. Grace warned Abby that she has her own pages to fill in the back of her journal with many more battles to come. The loose ends of the Horsemen, the weird cult that’s forming around him, the destroying angel – these are all elements that I’m sure will return in a third season. Not to mention we’ve only seen two of the Horsemen.

Fox has something very special on their hands with this show. There is unbelievable chemistry between the two leads, but also between the rest of the cast. Seeing Team Witness standing together at the end of the finale, battered and shaken, but together, it made me want to stand up and cheer. These are heroes that are unconventional, that have bad days and are afraid and imperfect. But at the same time, there’s such a strong backbone to them as a group and individually. The fact that Ichabod and Abbie are a tested and true friendship when so many other shows would have tried to shift them to lovers proves that this is a show worth keeping your eye on. It’s breaking gender and racial stereotypes by showing that it’s completely possible for a black lieutenant, a woman, can knock out a man who threatens her and utter the badass line of, “That’s true American strength.” It certainly is and I want to see as much of Abby Mills as the writers can give me. While the series has not been renewed for a third season as of this writing, Sleepy Hollow is such a fantastic show, I hope the showrunners realize the dedication of the fans and the potential they have with such rich characters and concepts to keep the show going for a long time yet.