Tweetable Takeaway: A heavy-hitting season finale of Suits brings change in the office, a surprising memorial, and a last ditch effort by Harvey to put a client away. Tweet

Last week fans of SUITS’ duo Harvey and Donna got what they’ve been waiting for – a confession of love from Harvey. (Albeit somewhat disappointing as it was stated as more of a fact.) Donna confronts Harvey about it this week, or rather his lack of reaction, and the man misspeaks and alludes to the fact that he said it out of pity after what she went through. Now, we all know Donna, and we know she doesn’t handle things like that well, so you can imagine her all-out attitude and speech to Harvey. Harvey tried to apologize but it was pointless by that time, and things won’t get any better. 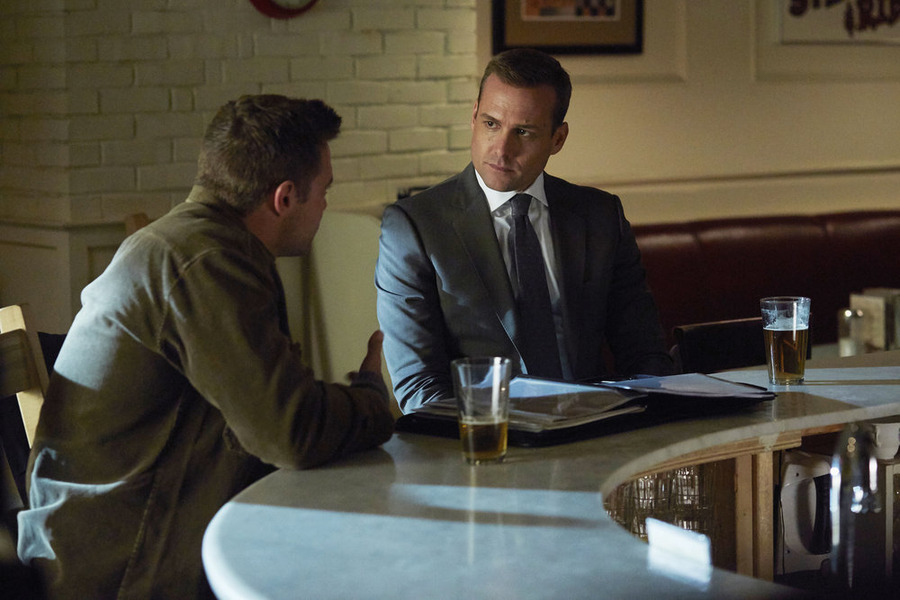 Louis Litt had a difficult time through the whole episode as, out of nowhere, his love-to-hate secretary Norma passed away. It was apparent to everyone that he cared for her much more than he would ever let on and her death has truly affected not only his professional life but his personal life and the way he lives his. At a small funeral/memorial at the office he makes a very sweet speech including the statement that we shouldn’t wait long to state out true feelings to each other; something that affects Mike and Rachel later in the episode. One of my favorite moments of this episode happens in a funeral parlor as Louis is trying to pick out an urn for Norma. Donna arrives and he goes crazy, yelling at the man that works there and raving bad things out at all the objects. It quickly turns into crying and it’s a realization for everyone about just how much it affects him.

Mike and Rachel, meanwhile, are working on a continuing case of Harvey’s and after failing decide to try to go after Charles Forstman, the man that screwed over Louis Litt and Harvey at a previous time. We finally learn what the bitter history between Harvey and Forstman and it involves Harvey’s younger gambling-addict brother. We all know that Harvey had a difficult time with his family growing up so it’s not surprising that he’d do whatever he could for his brother. Taking a job to get money isn’t past Harvey when it’s his family on the line. Forstman did the same thing to Harvey that he did to Louis Litt-except he gave Marcus, Harvey’s brother, the money he needed and said it was from Harvey so the truth was never let out. With all the issues of this case, Harvey goes to Jessica for help; the thing is, she’s been off her game since Jeff broke up and resigned from the firm, and she can’t help anyone right now. Harvey’s on his own-or is he? Rachel is proving herself incredibly competent and underappreciated as she goes to great, and legal, lengths to help Mike and Harvey with the case. She finally earns a well-done from Harvey which is hard to come by. Mike, after hearing Louis’ speech at Norma’s memorial, decides to take the advice to heart. He arrives home that evening to Rachel and an elegant dinner to celebrate the case. He surprises her (and me as well) by a wonderful speech and his grandmother’s engagement ring, to which of course Rachel says yes. However, while they’re celebrating a happy occasion, Donna is making a decision of her own. After many pleading attempts from Louis, and her realization about Harvey’s feelings, Donna tells Harvey that she’s going to work for Louis as his secretary. (I saw that coming through the entire episode but it was still hard to watch Harvey’s reaction. Harvey doesn’t handle it well, begging her not to with tears in her eyes but to no avail as she walks off.

I really liked this season finale, with its storylines and the high stakes. Usually the characters find a way out of their issues and problems but, in this situation, they just changed to different issues. I’m so interested to see how they handle Donna and Harvey with her working for Louis now and whether it will last. I think it could be interesting to see how the dynamics change and if the two come to their senses about each other. Rachel and Mike getting engaged was a bit off for me, considering they had such huge problems a few episodes ago. I really like them together so hopefully they’ll handle that relationship well-the writers on this show do a great job of creating tension and problems without screwing with the characters.

Suits comes back in the summer with a new season and episodes and I’m so looking forward to where they take the characters after the changes in this finale. The writers always find creative ways and avenues to take new stories and I imagine the new season will be no different.

Amanda is a producer and writer currently having the time of her life in Los Angeles. She can frequently be seen with a pen, notebook, and a cup of tea.
Twitter:@itstheREELmandy