Tweetable Takeaway: Season 10 of “Supernatural” starts off with more of the same, but the same is so good who’s complaining?
Tweet

Welcome back my friends to the show that never ends! And while they still haven’t done a season premiere recap with Emerson, Lake, and Palmer’s “Karn Evil 9,” they start us right off with an appropriately hard-rock 1970s “Heartbreaker” by Pat Benatar. If I can sing it, then we’re on the right road. That’s right: SUPERNATURAL is back to kick off its tenth season, and while not mind-blowingly brilliant, by any means, that special Supernatural blend of nihilistic violence and unwavering loyalty remains in full force.

When we last left our boys, Dean Winchester (who always had rage issues) was growing increasingly rash thanks to the Mark of Cain. (Could you think of anything more apt for late season “Supernatural” than to re-write Cain and Abel? Neither could I.) Old legend (courtesy of Crowley) tells us that the Mark of Cain brings out the demon in you, and the last shot of season nine left us with Dean’s demon-black eyes popping open. So, of course, the main question is: what’s a demonized Dean Winchester like? Some sort of psychopathic serial killer? An amoral (or immoral) torturer? Is there anything on this list he hasn’t already been? Well, it turns out, gloriously that a demonized Dean Winchester is the exact same as Dean Winchester has ever been, but without any inhibitions whatsoever. Dean and Crowley have been cavorting around the countryside for six months, stopping at every dive bar along the way to drink copious amounts of alcohol, sleep with everything female on two legs, and sing terrible karaoke. It’s just as perfect as you’d expect. 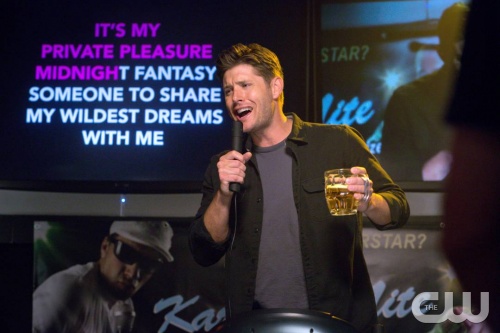 Sam, of course, is busy being Sam, desperately looking for MIA Dean Winchester despite the fact that he’s sworn for many, many, many years that if Dean were to die or go missing again he wouldn’t do anything unnatural (supernatural? Ohhohoho!) about it. Sam, thinking he’s found a lead on his brother, calls Cas to excitedly tell him. The call wakes Cas up (“Angels don’t sleep!”) and brings on a massive coughing fit. Well, that’s not good. Cas, of course, is running on “stolen grace” which seems to be akin to running on batteries instead of being the power plant. Here, Cas and Sam’s story parts ways. Sam hunts down Dean, posing (typically) as an FBI agent to gain access to security footage of Dean knifing guy in a gas station. Meanwhile Cas is met at his front door by Hannah (the most avid of his previous angel army) who tells him they need to find two rogue angels. What makes them rogue? They refuse to go back to heaven. Funny, since I seem to recall someone named Castiel pitching some mighty serious fits over something similar. Numerous times in the past. At any rate, Cas agrees to help.

While all of this is happening, a mystery guy pumping so much iron it’s a wonder he can even stand upright from all that tough-guy muscle gets a fax of Dean’s face taken from the security video. Ominous scowling and loading up a huge bag with many guns and sharp objects ensue.

Crowley is sick of living in dive bars, but Dean can’t get enough karaoke, tail, and booze. The cute blonde he’s been screwing gets pushed around by her abusive boyfriend. Dean, of course, being Dean, punches the guy in the face. How noble! He then punches the guy’s face until it looks like hamburger. Okay, there, buddy, that might be the demon coming out in you a bit. In fact, Dean keeps getting into scraps all over the place, with Abaddon’s old cronies coming at him left and right. He dispatches them with ease (as one would expect.) But where are all these demons coming from, hm? Crowley of course. “I was doing it to keep you sharp!” says Crowley, in their lover’s tiff. Crowley tells Dean that he’s been trying to groom him as his right-hand man in Hell. As if even a demonized version of Dean Winchester would go for that. Dean refuses, and Crowley, in a huff, informs him that he’s also lead Sam to his location. It’s basically a choice between Hell Head Honcho or Simpering Savior Sam. What’s it gonna be?

Sam, of course, had found a contact for Crowley in a phone from Dean’s crime scene. He called the number, getting a typically brilliant speech from Crowley about how Dean isn’t possessed by a demon, he is a demon. He’s become a demon version of himself. Yes, yes, triple yes all over the place. Way back in season four, my favorite thing was that the “good” brother (Sam) was the demons’ favorite, and the “bad” brother (Dean) was the angels’ pet. It’s everything I’ve ever wanted to see that bit of perfection just as perfectly reversed. Crowley tops it off with some words calculated to push all of Sam’s buttons: “Dean Winchester completes me, and that’s what makes you lose your chickens.” If there’s anything we’ve learned over the course of ten years, it’s that Sam and Dean have a pathological need to be together. Anyone else taking that place usually results in a swift, painful death. Crowley’s hit the nail on the head. That’s basically what’s got Sam in such a rage.

Meanwhile, Hannah and Cas find their rogue angel’s out in the wilderness, calmly fishing. Now, “Supernatural’s” angels are the thing that saved angels as a concept for me. Not only is their rigid bureaucracy absolutely perfect as a representation of the black and white morality of simplified religion, but they’re also hardcore warriors. These mofos are lethal and they are not afraid to kill you once you cross their code. Hannah and the two rogue angels get into it over what are essentially theological issues, with Cas ultimately offing the male one. The lady gets away. Hannah harps on about her serious hard-on for rules. “Without rules, there’s chaos. Out of chaos rise angels like [laundry list of past villains.]” Cas counters with his own humanistic philosophy–a carefully tended and painstakingly learned one about “heart, hope, love, dreams.” As Hannah so aptly replies “but those are human things.” That’s always been Castiel’s weakness. It’s his constant struggle to understand his own human qualities that makes him so compelling. 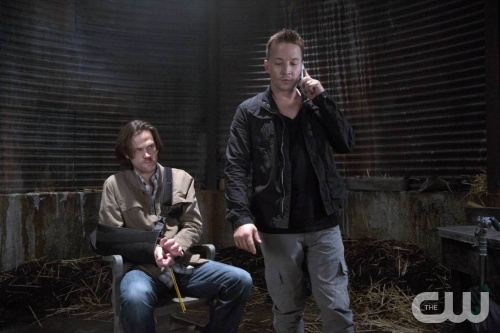 Sam’s crummy non-Impala car breaks down on the highway as he roars towards Dean’s last known location. A man stops to help. Hey, it’s that scowling creepy man from before. The one with the entire arsenal stuffed in his trunk. This should end well! The man beats Sam over the head, hauls him to a barn, and zip ties him to a chair. He then makes all kinds of grand speeches alluding to the horrible things Dean Winchester had done to his brother. Twisted logic implies that he’s about to do horrible things to Sam to get even. Sam begs him not to do anything. “He’s a monster,” says Sam. But this man assures Sam that “Oh he was. … And I’m the monster now.” Dude, I’d maybe rethink that if I was you. He calls Dean, and Dean picks up, driving down the road in the Impala (praise the lord, the lady enters!) They posture a bit and threaten each other, but most astonishingly, Dean refuses to meet any of the guy’s demands to save Sam. It seems this fellow didn’t get the memo that Sam Winchester might not be Dean’s biggest weak spot anymore. What Dean does say is that, if anything happens to Sam, Dean will hunt him down and kill him. Yeah, that sounds about right. But he says it with such utter dispassion it makes a chill run up your spine.

All in all, “Black” was solid typical fare. I loved all the little call backs (particular favorites were the “jerk”/”bitch” interaction between Crowley and Dean when that’s a traditional Sam and Dean thing from the very early seasons) and the recognition that, well golly gee, there’s a pretty huge continuum of storyline to draw from. They’ve given up entirely on making the series accessible to all but the craziest obsessives and I’m 100% fine with that decision. It’s nice to hear the names of old villains when appropriate, or get sly references to major plot points from earlier seasons (for example: snide remarks about Sam “hitting another dog” were much appreciated.) And who could ever resist Dean and Crowley playing foosball in a bar?

So, was it good? Have they still got that magic touch even into the tenth season of this utterly insane ride? Well, at this point it’s hard for me to even put a rating on “Supernatural” episodes. I know when they suck because they make me mad. I know when they’re good because they just make everything feel right. The first episode of season ten makes me feel like everything is right with the world. I’d say they’ve still got it.